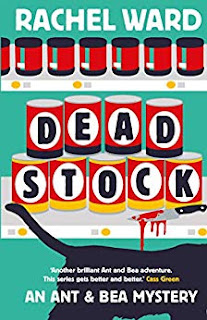 Her debut novel, The Long Weekend, published by Andersen Press, is a tense thriller about two boys who are abducted after school. Her new book, The Girl in the Broken Mirror was published in May by Troika Books: 'an unflinching, multi-layered exposition of male privilege, male abuses of women, and the clash of cultures. With hard-hitting clarity it shows how girls are silenced.' Love Reading 4 Kids

When I found out that I had won two crime fiction books by Rachel Ward I knew I was in for a treat. As a children’s writer, I know of Rachel Ward’s fiction for teenagers and thoroughly enjoyed her Numbers series.

In The Cost of Living we meet the two amateur sleuths, who both work for the local supermarket, Costsave, in the fictional town of Kingsleigh. Bea, a check-out girl in her early twenties, lives with her agoraphobic mum, Queenie; and Ant, from the estates, who left school early and seems to be going nowhere, but who manages to get a trainee job at the supermarket. An unlikely friendship springs up between them as a crime draws them together. There is a stalker in Kingsleigh and he is attacking women. Then a woman is murdered. This is all too close to home for Bea and she begins to investigate and, gradually, Ant is co-opted to help. Everyone is a suspect – colleagues and locals alike.

Dead Stock is the second book in the series. It opens with a body being dropped from a bridge, a dead cat, and more complications in both Bea and Ant’s personal lives. Although both books can be read as stand-alone, it is best to read the two books in order to get fully immersed in the series.

The main characters are down to earth and immensely likeable. The dialogue is fresh and witty. The plots for both books will keep you guessing right to the very end. I love the way Bea and Ant’s friendship develops over the two books – and the same applies to the rest of the supporting cast. We get to know all the staff of Costsave, and the locals, and follow their stories through both books. The depiction of Bea’s relationship with her mum Queenie is just lovely. Then there’s Bea’s co-worker Dot, who is a real scream, Bob on Meat, the odious deputy manager Neville, and so many more.

And everything is in place for a third book in this series, which I can’t wait to read – I really need to know more about one of Bea’s regular customers, who I won't name!

Rachel Ward aptly describes her books as ‘cosy crime’: cosy they may be, but they are still thrillers complete with red herrings and killers, like a novelised Midsummer Murders. So to drive away the winter blues, I would highly recommend curling up in front of the fire with a cup of tea or a glass of wine and a copy of The Cost of Living. You'll move on to Dead Stock in no time.

The Cost of Living and Dead Stock are published by Sandstone Press.
Posted by Linda Newbery at 00:00