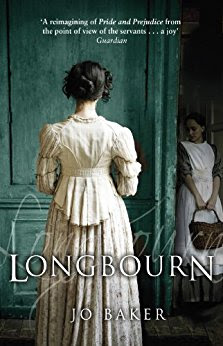 "Jo Baker writes with complete assurance, bringing her characters and settings vividly off the page."


Linda Newbery edits Writers Review. Having published widely for young readers, she is now working on a new adult novel.

Jane Austen season is upon us again, with the lavish Andrew Davies dramatisation - and completion - of Sanditon for ITV currently gathering mixed reviews. When I read Sanditon and reached its abrupt end, I felt a pang for the novelist who'd been unable to see her vision through to completion - but what would Jane Austen have made of the nude bathing on a public beach, close-partnered waltzing and modern mannerisms in this screen version?

For a different, sideways look at Jane Austen, I recommend Longbourn, subtitled Pride and Prejudice - the servants' story.  Jo Baker takes us behind the scenes of Jane Austen's world to the toilsome routines that allow the Bennet family to live in leisure and comfort. To housekeeper Mrs Hall, the arrival of Mr Bingley at Netherfield Park, which gives Pride and Prejudice its famous opening sentence, "meant a flurry of giggly activity above stairs; it meant outings, entertainments, and a barrowload of extra work for everyone below." The smooth running of the household depends on housemaids being up before first light to fetch water and light fires, their chilblained fingers flaring with pain. For an evening party at a neighbour's, footman James must wait outside in icy weather ready to drive home, with horses to tend into the early hours while the young ladies go straight to their beds.

If you read this hoping for romantic encounters between Elizabeth and Mr Darcy, you'll be disappointed; Jane Austen's key players are in minor roles here. Mr Darcy barely appears in person, and he certainly isn't Colin Firth or Matthew Macfadyen. We see the Bennets' acquaintances only as they affect the servants: Mr and Mrs Hall, Sarah, and the younger, pre-pubescent girl, Polly. When Mr Collins arrives in search of a wife, we're made aware of the insecurity of the servants' livelihoods, for it will be in his power to dismiss them all, should he wish, when he takes ownership. Mrs Hall is relieved when he settles for the homely Charlotte Lucas. A servant like Sarah - an orphan taken in by the stern but kindly Mrs Hall - has nothing to call her own beyond the wooden box in which she keeps her few possessions; not even space, as she shares a room and a bed with Polly. Rare moments of privacy are snatched between chores, so that when Sarah and Mr Bingley's footman are mutually attracted she's astonished by "the dawning revelation that pleasure was possible for her."

The plot hinges on the arrival and later disappearance of the young manservant, James Smith, whose secrets are revealed partly through the machinations of George Wickham, the predatory charmer. Jo Baker picks up on the small detail in Pride and Prejudice that a soldier of the visiting militia has been flogged; here Sarah witnesses the brutal act while on an errand to Meryton, later connecting it with James's story. A middle section takes us back to his army service during the Napoleonic wars, and into territory which ranges far from Longbourn and middle-class Hertfordshire. Mrs Hill, too, has a back-story which throws an intriguing - and plausible - new light on the Bennets' marriage.

While this is a compelling story in its own right, it closely parallels the events of Pride and Prejudice with the fairly safe assumption that readers will be familiar either with the novel or with one of the many adaptations. But there's no attempt to imitate Jane Austen's style. In fact readers may find more similarities to Charlotte or Emily Bronte in Sarah's passionate love for James, her fierce loyalty, and in particular in the descriptions of landscape and weather. Here is James, alone on a beach: "He slipped away to the shore, and walked across the low headland; it fell away into a spit of sand, the grasses thin and fine as old men's hair, the sand drifting and scattering and settling; and white shells and then bleached bones, and then a sheep's skull, picked white, which made him catch his step a moment, not at what it was but at what he thought it might have been. Then skipping sand-fleas, and trails of dried seaweed, and he was out to the edge of the world." You'll never find anything like this in a Jane Austen novel, where landscape is seen only as evidence of status, taste and good management.

Jo Baker writes with complete assurance, bringing her characters and settings vividly off the page. Her story isn't unique in being a spin-off from Pride and Prejudice - Emma Tennant, in Pemberley, and P D James, in Death Comes to Pemberley, have also drawn on this much-loved classic. But in my view Longbourn, with its shift of focus, outshines both.

Longbourn is published by Transworld.