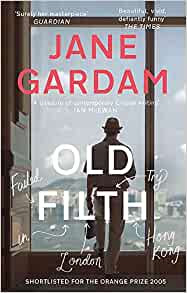 "Beautifully written, moves at pace, surges with a bitter poignancy and is laced with a very particular kind of magical realism. It is also strangely defiant and often very funny."

Rachel Morris began as a novelist but was sidetracked by her love for museums and for 20 years has been a director of a museum-making company called Metaphor. Her book, The Museum Makers, is out on 27th August. It’s about time and memory and museums, but also about families and the stories they tell and how, in the ways that we all try to make sense of our pasts, we are all museum makers. It’s part memoir of a bohemian childhood full of madness, death and storytelling; part hymn to the strange, addictive magic of museums. The Museum Makers is published by @septemberbooks and is available in bookshops, as well as online, at Amazon, at Waterstones and at it.ly/TheMuseumMakers
I never meant to fall in love with Jane Gardam’s novels. When I first came across Old Filth (the opening book in her trilogy), I could still feel the echoes of my distant adolescent rebellion. What do I want with an English comedy of manners, I thought? How wrong I was. And when I re-read Old Filth again a couple of weeks ago I thought it surely would have dated, because the book looks back to a time that is so utterly vanished that it’s like opening a door to another world and stepping over a chasm so deep that you cannot see the bottom.

In fact Old Filth (which was published in 2004)  was and remains beautifully written, moves at pace, surges with a bitter poignancy and is laced with a very particular kind of magical realism. It is also strangely defiant and often very funny.

It tells the story of the lawyer and judge Eddie Feathers, also known as Old Filth (as in ‘Failed in London, Try Hongkong’) and also Fevvers, Sir Edward and the Judge. Old Filth was a Raj orphan, an anodyne description for a bitter childhood. His mother died at his birth, he was brought up in a Malay village and then taken unwillingly from the foster mother he loved, fostered again into a cruel family back in the UK, went to Oxford, started poor, made a packet in Hongkong, lived - in short - a life that was a strange mixture of privilege and grief. And that is one of Jane Gardam’s themes – never assume that other people have led dull and uneventful lives. When the book opens he is living out a furious and irascible old age, clinging to his wife’s memory like a drowning man to a lifebelt.

The book’s strengths are many. Gardam’s dialogue is to die for – supple, expressive, often startling. She can turn the direction of a story on a sixpence. (Oh, you think quite suddenly, so that’s where this is going.) She has a transfiguring talent, can flood a scene with an ecstatic strangeness, can turn the ordinary world momentarily into something glorious. (Her magical realism is at least as strange as anything in Gabriel Garcia Marquez.) And she is also fiercely loyal to Old Filth, her central character – which in this case is a strength.

But above all she writes wonderfully about Time; how it holds us and confuses us; how we live in all times, past and present, simultaneously; how Time maroons us on lonely beaches (‘Who the hell was he?’ asks one policeman of the other about Old Filth, ‘He’s like out of some Channel 4 play’); and above all how the griefs of our childhoods follow us everywhere and never leave us, returning sometimes in old age in a flood that drowns us.

Old Filth got me wondering about charm in novels – and why some novels have it? Old Filth has charm, as does – for instance – Brother of the more famous Jack, by Barbara Trapido. Which is another story. But maybe in the end it comes down to energy and exuberance?

And the next two novels in the Gardam trilogy, which are called The Man in the Wooden Hat and Last Friends, are, remarkably, almost as good.
Old Filth is published by Abacus.