THE FAMILY UPSTAIRS by Lisa Jewell, reviewed by Adèle Geras 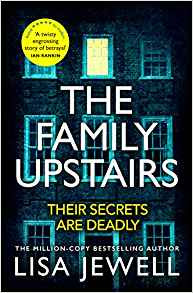 "A gem from Lisa Jewell. Someone has probably said this before, but I couldn’t resist ..." 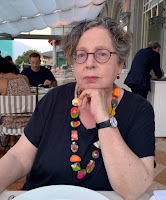 Adèle Geras has written many books for children and young adults and six novels for adults, the latest of which is Love or Nearest Offer, published by Quercus in paperback. She lives in Cambridge. A historical novel for adults will be published by Michael Joseph in June 2020 under a pseudonym yet to be publicly revealed.

This is going to be a very difficult review to write. In fact, now that I come to think of it, I’ve not read that many reviews of Jewell’s work over the years. Her début romantic comedy Ralph’s Party  was very joyfully received but since then, even though her books are bestsellers, and even though she’s moved from romantic comedy to what you could call psychological drama, she’s not the sort of writer who garners half a page in the TLS.

Never mind. Jewell’s books come out with delightful regularity and head straight for the charts. This one is presently sitting at the top of both the Sunday Times bestseller list and the Neilsen Bookscan Original Fiction list in the Bookseller. The readers have made their judgement and I agree with them. The Family Upstairs is a real “can’t put it down even while you’re frying onions “ book. You hold the pages open with one hand and cook with the other.

It’s the very model of my younger daughter’s definition of a good novel: Proper People in Interesting Situations. It centres around a mansion in Chelsea: 16 Cheyne Walk. ( By coincidence the Historical House books written by Linda Newbery, Ann Turnbull and me also take place in Cheyne Walk....what a small world!)

The structure of the book is somewhat complicated because there are three narratives unwinding alongside one another. In one, a young woman takes possession of 16 Cheyne Walk under the terms of a slightly mysterious will and sets out to discover a very murky truth that lies deep in her childhood.

In the second and perhaps overarching strand, Henry, who lived in the house when he was a child, explains exactly what went on there....I’m not going to give even a hint of a spoiler, because plenty of terrible things did go on there.

In the third strand, Lucy, Henry’s sister, tells her quite separately gruelling adventure. All three strands are plaited together to produce maximum tension, gasps of horror and a dénouement in which....but no, I’m going to resist saying anything about that as well. It’s terrific, and has a glorious little twistette in the tail.

If I have a single criticism, it’s that two of the heroines’ names are quite similar: Lucy and Lizzie, but truthfully it’s not really a problem. I got used to it in the end.

This review might be posted too late for the sun-lounger season, but The Family Upstairs would work just as well at a fireside, or in bed or....well, anywhere really. It’s a gem from Lisa Jewell. Someone has probably said this before, but I couldn’t resist.

The Family Upstairs is published by Century.
Posted by Linda Newbery at 00:00