Guest review by Marcus Berkmann: THE UNCONSOLED by Kazuo Ishiguro 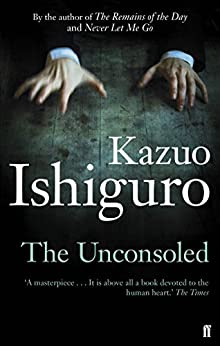 "... in my opinion, one of the greatest post-war novels of them all, far ahead of anything else that Kazuo has written and liable (if it so moves you) to stay in your head for months if not years after you have finished it."

Marcus Berkmann is a regular contributor to Private Eye, Saga Magazine and the Daily Mail, for whom he writes book reviews. He has also written ten books, including last year’s Berkmann’s Cricketing Miscellany, and he is a regular contestant on BBC Radio 4’s Round Britain Quiz.

Many years ago, longer ago than even I can remember, I read Kazuo Ishiguro’s first three novels: the two Japanese ones, and the multi-million-selling, Booker-Prize-winning The Remains of the Day. At that point I rather thought that was it for Kazuo. I admired his books for their cool, formal style and clenched emotional constipation, but loved them? No. There are so many other books to read, not all of them by P G Wodehouse, and only so many years in which to do it.


But I kept an eye on Kazuo, especially when I found out that he was the only Booker-Prize-winning novelist who had once been a grouse beater at Balmoral (in his school holidays). And gradually I started reading him again: Nocturnes, a series of short stories vaguely about music (not bad), Never Let Me Go, a genuinely disturbing novel about clones (brilliant) and When We Were Orphans, a detective novel without much of a plot (a slight misfire). There were only two books left, and one of them was the fattest and most terrifying of them all, The Unconsoled.

The Unconsoled was Ishiguro’s oddity. Written after The Remains of the Day, when one literary journalist of my acquaintance said ‘he could have written anything he wanted’, it’s three times as long as any of his other books and very much stranger. It features Ryder, a concert pianist who is in some unnamed foreign European city to play a recital. Ryder is a star: everyone wants a bit of him and he does his best to please everybody. But he is also grievously overworked and his sense of reality has given way to a sort of dreamlike state, where time is elastic, geography folds in on itself and he keeps forgetting what he is supposed to be doing next. Even reading it makes you feel slightly woozy, and for a while you keep wondering whether there’s going to be an explanation for all this. Then you remember you’re reading Kazuo Ishiguro, who doesn’t do explanations.

What it builds into is, in my opinion, one of the greatest post-war novels of them all, far ahead of anything else that Kazuo has written and liable (if it so moves you) to stay in your head for months if not years after you have finished it. In his travels Ryder meets many people who tell him, at great length, their complete life stories, in a way that you might recognise if you have read Rachel Cusk’s later and equally bold Outline/Transit/Kudos trilogy. (If she got the idea from The Unconsoled, all I can say is that she has excellent taste.) The book is also, extraordinarily for Ishiguro, very funny. Who knew he even had a sense of humour? Maybe his eyebrow has been raised throughout his other books. I may have to reread them to find out.

On publication the ferocious literary critic James Wood famously said that The Unconsoled ‘invented its own category of badness’, and I have good friends, clever, well-read men and women, who hate the book and all who sail in her. So let’s just say it won’t be to everyone’s taste. But when the Nobel Prize Committee gave Ishiguro their Literature prize in 2017, I bet it was for this book more than for any other. In their citation they describe him as a writer ‘who, in novels of great emotional force, has uncovered the abyss beneath our illusory sense of connection with the world’ — which by extraordinary coincidence describes The Unconsoled perfectly.

The Unconsoled is published by Faber & Faber.