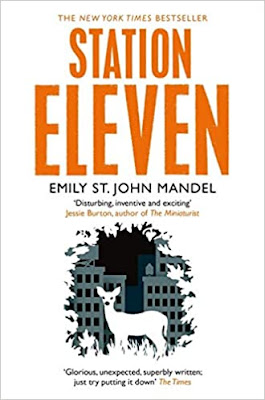 "It is an odd thing, to read a dystopian novel while living in a somewhat dystopian world ..."

First published in 2001 for children, Cindy Jefferies found success with her Fame School series with Usborne Books, obtaining 22 foreign rights deals. Latterly writing fiction for adults as Cynthia Jefferies, her first title The Outrageous Fortune of Abel Morgan was published in November 2018. Her second title The Honourable Life of Thomas Chayne came out in November 2019 and is set during the English Civil Wars.

I first came across Station Eleven in a bookshop on Roncesvalles Avenue, Toronto. Having asked for advice on what Canadian fiction to read I came away with Alistair MacLeod, Hugh MacLennan and Emily St John Mandel. All were second hand because I was short of cash. I was amused to see that Station Eleven was an English edition, with the pencilled second-hand price in English money. How easy it is, I idly thought, to fly thousands of miles only to find a several times bought and sold book written on one continent, published in another and to have found its way to its author’s home town. And then I put it in my bag and flew back with it to the UK.

Since reading, I have thought several times of reviewing the book. It is a curiously uplifting dystopian novel, which charts several people through the utterly life changing experience of surviving a catastrophic virus. When Covid-19 happened I thought it would not be a review anyone would want to read, but now I’m not so sure. In common with the novel Earth Abides by the academic and names expert, George R Stewart which, published in 1950 also follows survivors of a virus which decimates the human race, it holds up a mirror to ourselves. In fact they both force us to consider. How would we react? Where would we go? What would we want to keep and what would suddenly have no importance for us?

There are many differences between those novels and our situation today. Both of the fictional viruses wipe out the majority of the population in a matter of hours or days. No daily briefing, organised food supplies or help for the most vulnerable. The heroic work to keep as many safe as possible, to manage the virus, to keep civilisation ticking along is perhaps not the stuff of enjoyable fiction. Far better to get almost straight on to afterwards, when individuals have to utterly take responsibility for their own lives.

Station Eleven moves from before to after and back again as it explores various characters. There are several motifs, which crop up from time to time. A comic book, a paperweight, an unusually named dog, and running throughout is an examination of fake and real. Before the pandemic, Clark, the business consultant suddenly understands that some people don’t even realise that they don’t enjoy their jobs, which makes him want to weep. Afterwards, an actor’s life has meaning for one girl in spite of him dying before the virus hits.

One striking thing about both novels is that they see their worlds recovering from man’s dominance in a way that is beautiful and terrible. As the years pass, how useful is it to teach children about before, when light appeared when a switch was touched, when people could speak to others many miles away, when cars moved and aeroplanes flew and when we knew what was happening across the oceans? For the people who were old enough to remember it is best in the early days not to think of lost friends and family. “Hell is the absence of the people you yearn for.”

It is an odd thing, to read a dystopian novel while living in a somewhat dystopian world. What makes both these novels acceptable to me in these perilous days is the kindness and grace within them. There is some violence, but it is never gratuitous. Both books are too intelligent to go far down that road. Station Eleven is in many ways a book about travel but the most important are the internal journeys Mandel’s characters take. Clark, one of the passengers from a last incoming flight, holes up in the airport with nowhere to go. He beds down by a departure gate. “It will be hard to come back from this,” he thinks, not yet able to understand that there is no coming back at all in his lifetime. In our own, slower pandemic we are in Clark’s middle ground between before and after. A month ago all the talk was of getting back to normal, now it’s more nuanced. We are realising as Clark did that it may not be as simple as that.

I have been struck recently at how my thoughts in some ways echo the thoughts of characters in the books. A survey just out shows that people are seeing some of the advantages to the way our lives have changed since the lockdown, in spite of the terrible cost of lives. Our air is cleaner, noises are more often birds singing than machines working. The frustration of rush hour traffic, while now many office workers are finding that home working is possible. What is normal? Why would we want to return to the hell we have created on earth for so many of its species, including many of ourselves? Have we lived through ‘before’ and will ‘after’ be radically different for us?

What would you want to save? In Station Eleven, the Travelling Symphony has a Star Trek quote as its motto… Survival is insufficient. For Kirsten it is music and Shakespeare. In Earth Abides, Ish feels that the great library needs preserving. Sitting here, in isolation, I would want to preserve memory and the verbal sharing of it with others: the beginnings maybe of a new folk memory and a new mythology.

Station Eleven is published by Picador