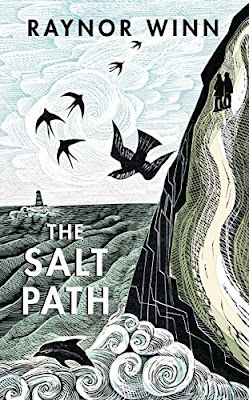 "They were living right on the edge in more ways than one ... this is a remarkable book."

On one level, this is a book about a couple who walked the South West Coastal Path, non-stop – all 630 miles of it. As you can see, it has a beautiful cover whose design places it firmly in the section of bookshops with books about nature and our relationship to it.

And indeed and of course, it is about nature – but not primarily so. It’s not a piece of finely judged, carefully crafted nature writing, though there is some of that here too. It’s the searing story of a couple whose home and livelihood and hopes for the future are suddenly torn away from them, and who decide, pretty much on impulse, that the only thing they can do, the only way they can literally and figuratively move on, is to walk, carrying with them all that they have – which is almost nothing.

The story begins, Ray tells us, when she and her husband Moth lose everything at the end of a court battle after an investment goes badly wrong. What makes this even worse is that Raynor eventually finds a document which she believes will prove that they are innocent of blame, but doesn’t submit it in time or according to the correct procedures: they cannot afford legal representation (and of course, legal aid was pretty much abolished some years ago), and they fail to find their way through the complexities of the law without it. And even worse than that: the person who recommended the investment to them and is now suing them is an old and dear friend of Moth’s, so that he feels a sense of hurt and betrayal. As a result of losing the case, they lose their home, a Welsh farmhouse which they have lovingly restored over many years; and the livelihood which goes with it.

And as if this isn’t enough, just after the verdict, Moth is diagnosed with a terminal, degenerative illness: they are in their early fifties.

Raynor Winn tells the story of how, as they hide from the bailiffs in the cupboard under the stairs, she notices a book in a packing case. It’s called Five Hundred Mile Walkies, and it’s about a man who, many years before, had walked the South West Coastal Path with his dog. And it’s this that gives them their idea.

When I read this, it seemed quite shocking to me – absolute madness. Moth is in constant pain, sometimes he can’t even get up. They have the grand sum of £48 a week coming in, they have virtually no other money: they can’t afford even to buy decent equipment. Neither of them is strong enough to carry much weight – in fact it’s practically a military manoeuvre even to get their rucksacks onto their backs. And yet, and yet… what else can they do? And what sort of an indictment of our society is it that they face such limited choices? Their two children are at university and in no position to help (though, in a reversal of the normal rôles, their worried daughter sends them a new phone and instructs them that they must keep in close touch); friends do what they can and offer temporary accommodation, but cannot, in the end, give them their lives back – this at least offers them a reason to move on, literally as well as metaphorically.

And so off they go. With a flimsy tent, inadequate sleeping bags, a single change of clothes, a thin towel and a toothbrush – and Moth’s battered and beloved copy of Seamus Heaney’s translation of Beowulf: a fitting companion, with its theme of a battered hero fighting against evil monsters and against time itself.

It’s very sobering, to read of how difficult it is to live on so little. They can only afford to buy the most basic foodstuffs – meals are delights such as pot noodles, or rice and a tin of peas or mackerel. Sometimes, even water is difficult to come by. Washing is usually impossible – there’s plenty of sea, but for one thing that’s salty, and for another, the cliff path is usually high above it. I’ve seen bits of that coast path, and it’s very precipitous. There are endless setbacks, yet even so, somehow they don’t just keep going, but Moth becomes stronger; and the experience of being so very close to nature teaches them to live in, and treasure, each moment. They have numerous encounters along the way, some of them strange, many of them comic. Quite early on, they ask for information at a tourist office in Combe Martin – and are puzzled by the reaction of the ladies behind the counter.

'The ladies shuffled, nudging each other, giggling.
“Of course, it’s a pleasure to help. Just go to the grocery store up to the left. They’ll do cashback for you, Mr Armitage, but they weren’t expecting you yet.”
“Sorry, I’m not Mr Armitage.”
The ladies looked at each other conspiratorially.
“No of course not, that’s okay, our secret, we won’t say a word.”
Moth looked back in bemusement…'

This keeps happening: people keep mistaking Moth for this mysterious Mr Armitage. Well – Moth might have been bemused, but I wasn’t. In 2015, the poet Simon Armitage published a book about his travels along the South West Coastal Path. The idea was that he would walk a stretch, and then pay for his board at a pub or whatever by doing a reading of his work. He’d done this before in the Pennines. I bought the book, because I’m familiar with some bits of the path, particularly the first part from Minehead, but to be honest, much as I admire his other work and the TV programmes he’s done, I was a little disappointed in this book. It felt as if he was just going through the motions (sorry!): as if he was doing it because it seemed like a good idea for a book, not because it was something he was really enjoying. And the reaction of the people Moth and Ray meet, as well as the book itself, make it clear that the whole thing was very carefully planned and organised for the poet: there was no jeopardy involved. But for Moth and Ray, there most certainly was. They were living right on the edge in more ways than one.

This is a remarkable book: it’s a searing reflection on what is to be homeless and poor; an account of a first-hand experience of being as close to nature as you can get; and a tender story of a relationship which survives some incredibly difficult tests. In the end, one of the people they meet offers them a place to live: they come through. The last word belongs to Raynor herself.

'At last I understood what homelessness had done for me. It had taken every material thing that I had and left me stripped bare, a blank page at the end of a partly written book. It had also given me a choice, either to leave that page blank or to keep writing the story with hope. I chose hope.'

The Salt Path is published by Penguin.