Guest review by Sally Nicholls: RISK, ODDS AGAINST and more - the novels of Dick Francis

"It's a long time since I've been so thoroughly swallowed by a novel ..." 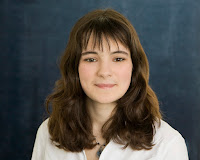 Sally Nicholls is the author of nineteen books for big children, little children and teenagers. Her novels have been shortlisted for (and won!) numerous awards, including the Waterstones Children's Book Prize, the Costa Book Award, the Guardian Children's Book Prize and the Carnegie Medal. Her work includes Ways to Live Forever, Things a Bright Girl Can Do and The Button Book. She lives in Liverpool with her husband and two children.
In the corner of my mother’s bookcase, looking rather incongruous next to field guides to birds and plants and illustrated hardbacks on British history, sit a small collection of red-jacketed paperback thrillers. My mother is not a natural thriller-reader. She likes autobiographies, books about religion, fiction about good people being decent to each other. But the thrillers, all by the same author, have sat on her shelves my entire life, surviving innumerable clear outs. Their red spines are as familiar to me as the battered Shirley Hughes books I read to my children.

Home for half term, looking for something to read, I pick one off the shelf.

Six hours later, I put down the book, somewhat stunned. What just happened? It’s a long time since I’ve been so thoroughly swallowed by a novel. I feel breathless, as though, like the jockey hero of Risk, I’ve been chloroformed, kidnapped, bundled off in a Red Cross ambulance minutes after winning the Cheltenham Gold Cup on a rank outsider. Captive to the yellowing pages, I am addicted. I want more.

I go on social media to rave about my new discovery, and am greeted with delight. One person tells me Dick Francis is the reason she became a writer. Several talk about finding him in the unbookish houses they grew up in. They all agree how readable he is. ‘I read one when I was pregnant,’ someone else says. ‘I was sort of alarmed by how addictive it was. Felt like snorting cocaine. I wondered if I read another if I would be forever condemned to reading nothing but his books.’

I am not at all surprised by this. Writers are snobs about bad writing, but they respect anyone who does a job well. Dick Francis is what George Orwell called a ‘good bad writer’. His books are mid-twentieth-century thrillers in the American vein; they are by no stretch of the imagination literature. But they are very, very good at what they do. He has the sort of simple style it is incredibly hard to emulate. He is emotionally sound, and quietly humorous. He is the only three-time winner of the Edgar, and one of only two writers to win both the Edgar and the Golden Dagger for the same novel, Whip Hand. (The other was John Le Carre for The Spy Who Came in From the Cold.)

Over the next few weeks, I read seven more Dick Francis thrillers in quick succession: Odds Against, Whip Hand, Come to Grief, In the Frame, Nerve, Reflex and Straight. These are all recommendations by friends on social media, and any would make a good starting point to his work, though it should be noted that Odds Against, Whip Hand and Come to Grief are a mini-series about Sid Halley, Francis’ most popular hero. You may prefer to read them in order, though you don’t really have to.

The books are very similar. Francis’ heroes are all basically the same person; practical, intelligent men of about thirty, physically resilient, emotionally reticent, frequently wounded (literally and metaphorically) and splendidly moral. When Philip Nore takes a bribe to lose a horse race in Reflex I am genuinely shocked, though he quickly comes to his senses. They all also have broadly the same plot. The men, who are generally jockeys, stumble upon evil and are compelled to do something about it. They use their wits to investigate, despite the clearly increasing danger. At some point, about two-thirds of the way through, they are set upon by rent-a-thugs and attacked or kidnapped. They are hurt. (As an ex-jockey himself, Francis wrote with great authority about pain, though never gratuitously). Their loved ones beg them to rest, but they struggle on, breaking their chains, outsmarting their enemies, and, in one memorable finale, winning a major horse-race for the sheer joy of forcing the villain to congratulate them on live television.

These wounded heroes are part of Francis’ appeal. They may be steely-eyed under pressure, but they come with well-realised neuroses and insecurities. They don’t just walk away from their wounds, they carry them with them for the remainder of the book, and sometimes into the next one. When one ends up trapped in his car after a car crash, we get a meticulous description of how he is cut out. Francis (or apparently usually his wife) does his research. Another joy of the books lies in the details of the worlds he writes about, be they horse racing, painting, photography or the rare gem trade. I’ve never been to a horse race in my life. But his knowledge makes me interested. He cares, so so do I.

The emotional honesty is perhaps why Francis has so many female fans. He writes women well; be they spinster headmistresses who outmanoeuvre thugs, or junior editors with an eye for genius. There aren’t many seventies thriller-writers who would give Sid a cheerful, untidy PhD student as a love interest. And never once are the women ‘fridged’, raped or hurt. If a villain wants to get to a Francis hero, he does the decent thing and bops him on the head, ties him up, shoves him into his car, and duffs him up in a deserved stable yard somewhere. There is romance, but no on-stage sex and no swearing, apparently because Francis didn’t want to upset the Queen Mother, who was a fan.

Rumours abound that Francis’ wife actually wrote the books. He left school at sixteen, she was a publishers’ reader with a university degree. I’m not so sure. The books are extremely competently written, but they are also intensely male. Francis himself said “I am Richard, Mary was Mary, and Dick Francis was the two of us together.” Their son described them as ‘Siamese twins joined at the pencil.’ Some sort of collaboration seems most likely.

For me as a writer, something good always comes from falling nose-first into a book or a series. I’m certain I wouldn’t have written Things a Bright Girl Can Do and A Chase in Time (at least not in quite the same way) if I hadn’t fallen so hard for Peter Wimsey and Harriet Vane. I’m not sure what will come out of all these racing thrillers, but I’m certain something will. I’m looking forward to finding out what.
Dick Francis' novels are published by Penguin.
Sally Nicholls' Things a Bright Girl Can Do is included in this round-up of suffragette fiction for younger readers and adults.