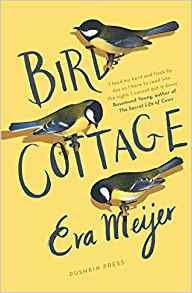 "As much as anything, this is a book about communication and about relationships ... the reader feels a real warmth and joy emanating from the curious friendships that are its heart."

Daniel Hahn is a writer, editor and translator. "One way or another, most of my work involves books. I write them, translate them, edit them and review them. Quite a lot of what I do has a particular focus either on international writing / translation or on children's literature." A former chair of the Translators Association and the Society of Authors, as well as national programme director of the British Centre for Literary Translation and trustee for the Society of Authors, he has worked with a number of other organisations working with literature, literacy and free expression, including English PEN, The Children's Bookshow and Modern Poetry in Translation. In 2017 he established a new prize for debut literary translation - the TA First Translation Prize. More on Daniel's website.

Bird Cottage is based on the life of a real person, and a very unlikely life it was. But the novel itself feels somehow unlikely, too, not least because it took a Dutch writer to discover the story and evolve it into this excellent novel, to be beautifully translated by a woman in the north of England, and a copy of the published translation sent to me at home in East Sussex . . . just down the road from where the real story took place. Until Bird Cottage (originally Het Vogelhuis) popped through my letterbox, I had never even heard of Gwendolen Howard.

Len – as she was known – was born at the end of the nineteenth century, she had an Edwardian childhood in Wales, then moved to London to be a professional violinist. Becoming restless in her early forties, she gave up this career to retire to a cottage in Sussex, where she lived for four decades, with her windows kept always open to let the birds in. Birds were her passion, and she built a life to be shared with them – they had the run of her cottage at all times, and she befriended them, named them, studied them, and wrote about them. As a musician, she could differentiate between their songs, writing them down in musical notation.

Author and translator create two voices for the book: the main narrative thread, giving us Len’s telling of her life in the first person (novelist Meijer’s attempt to make sense of a person through a narrative), and short interspersed pieces of what are ostensibly Len’s own ornithological writings, focusing on one particular favourite of hers, a great tit called Star.

Bird Cottage examines the great turning point in Len’s life – what led to it, and its consequences – as she decides to rebel against social expectation and withdraw almost entirely from human society, from the inadequacies of human relationships and of human linguistic communication. (Worrying at these limitations is both a natural and a stressful thing for a novelist to engage with.) Along with her isolation, she attains a kind of emotional detachment from what is happening elsewhere – the death of members on her family, even the consequences of war.

Meijer herself is a writer about animals (a new non-fiction study of animal communication, Animal Languages, is also just out in English), and one of the things that interests her is Len’s place in the professional ornithological world. Her published work was best-selling, and widely translated, but dismissed by the scientific community, not only because she was inadequately qualified, and a woman besides (though this, too), but because her methodology was outside the prevailing scientific fashion. Her observational research involved watching birds close-up in something not too different from their natural habitat, rather than laboratory observation – at the time, the common practice was behaviourist study in lab conditions. Her desire to observe birds in the most natural, unconfined environment possible blurs the boundaries of her world and theirs, which in turn narrows the focus of Meijer’s story to one of the most extraordinary intimacy.

So this is a true story, which relies on the historical evidence that exists for Len Howard’s unusual life (the line separating fact and fiction here is a fuzzy one, of course); but there’s much more to it than just the curiosity value. This is not a piece of documentary but a novel, driven by some beautiful writing and by appealingly believable characters. The careful characterisation applies not least to the birds themselves, several of which (of whom?) recur as Len comes to know them well. As much as anything, this is a book about communication and about relationships, and – surprising though this may be – the reader feels a real warmth and joy emanating from the curious friendships that are its heart.

A post-script: when you’ve read the book (and you should), read Antoinette Fawcett’s fascinating piece in Asymptote about the lengths she to which she went to produce the translation.