Independent bookseller feature No.11: Orb's Bookshop, Aberdeen: DRIVE YOUR PLOW OVER THE BONES OF THE DEAD, by Olga Tokarczuk, translated by Antonia Lloyd-Jones 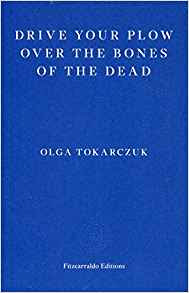 "This is the kind of book we love to stock at Orb’s – something a bit different, something you might not stumble across in every bookshop."

We (Maureen Ross and Dawn Finch) are two of the volunteers who run Orb’s Community Bookshop in Huntly, Aberdeenshire. This is a small rural town in the middle of many farming communities and we are the only bookshop for over an hour’s drive in any direction. The bookshop was threatened with closure and the local writers group, Huntly Writers, stepped in and raised the money required to keep it open. This December we’re celebrating out tenth anniversary! We do everything from going out to schools and literary events with our pop-up bookshop, to making sure our shelves contain books that you might not find in mainstream bookshops. We don’t try to compete with supermarkets or The River That Shall Not Be Named, because we can’t match the super-massive discounts they offer, and we don’t feel those prices give a fair deal to authors. We tend to stock things other bookshops don’t and we have a mix of old and new books and we have a gentle specialism in things like nature books, poetry and diverse and inclusive children’s books. We also stock books by local writers and poets, and have many books by our most famous former resident, Victorian fantasy writer George MacDonald.

A book that we’ve enjoyed very much recently is Drive Your Plow Over the Bones of the Dead by Olga Tokarczuk – published by independent publisher, Fitzcarraldo Editions. This was a book that was originally published in Polish but was translated into English in 2018 by Antonia Lloyd-Jones and in 2019 it had a wider release. It won the Nobel Prize for Literature in 2018, and has been on many other award lists since including the Booker Prize.

The plot revolves around an older woman who lives in a rural Polish village close to the Czech border. She studies astrology and translates William Blake, adores nature and wildlife, and misses her two dogs. When her neighbour shows up dead, Janina appears fascinated by the death and writes to the local police with her theory that the wild animals of the forest have killed her neighbour because he was a hunter. The chief of police does not believe her – but when he too is found dead, and then the village's fur farmer vanishes, people start to take a second look at Janina’s theories.

Orb’s team member Maureen says: “I first came across Drive Your Plow in a newspaper article about crime novels. I'm addicted to crime fiction and immediately ordered a copy. From the start this book captivated me with every word and I read every word which is unusual for me as a greedy and impatient reader. The book is much much more than a murder mystery although it is a very clever mystery tale. Janina is an acerbic and tough eccentric woman in her sixties, with a mordant sense of humour and a passionate belief in justice and freedom for all creatures not just humans. The tale is linked in with the work of the visionary poet William Blake - a direct quotation from him serves as the title of the book - and this in itself together with some intriguing information about astrological systems kept me delighted from start to finish. The geography and meaning of borders was also given a place in the building atmosphere of what it is like to experience the world from a totally different perspective. I loved this book and will re-read it again and again. I have never wanted to re-read a book before but this is finally the one. So much in it. Thank you Olga for the fabulous wit and intelligence of this story."

Orb’s team member Dawn is also a great fan of this book. She says, “Maureen recommended this one to me and I know it’s an oft repeated phrase, but I genuinely could not put it down. I’m not a crime novel reader so I wasn’t immediately convinced, but I am a sucker for a book in translation and that lured me in. Drive Your Plow feels different from the very first pages. Janina comes across as so real that you are drawn into her life and her world. This was one of those books that I found myself slowing down to read because I wanted to be part of Janina’s life for a while longer. I’ll be honest with you, I think I still miss her. I love it when a book does that to me.”

This is the kind of book we love to stock at Orb’s – something a bit different, something you might not stumble across in every bookshop. We hope that’s what our customers are looking for – the kind of personal contact and recommendation that comes from people who really do love books! 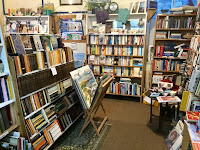