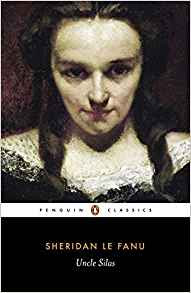 "How tricks and illusions undercut a sense of reality, the deliberate attempt to disturb the balance of a rational mind ..." 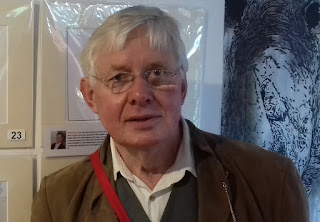 Le Fanu’s best-known novel, Uncle Silas, concludes with what may stand as a central fixation in his work, framed by the protagonist and narrator of the novel, Maud:

‘This world is a parable – the habitation of symbols – the phantoms of spiritual things immortal shown in material shape.’

The statement might read as a lofty philosophical animadversion on Nature’s mysteries and the unexplained phenomena of the universe whereas, in this context, it delves into the darker corners and impulses of the human psyche, the machinations of the unprincipled, the bid to influence, manipulate and subdue the innocent. Deceit, deception, undermining trust become instruments of domination. But…slow down, you horses of the night, we must tread more circumspectly.

Ann Radcliff, author of a number of Gothic novels, ushered in a new genre of fiction which extended interest in the mind’s darker impulses. Sophocles’s introduction of the third character in tragedy, Webster’s obsession with ‘the skull beneath the skin’, Hamlet’s ‘more things in heaven and earth than are dreamt of in your philosophy’ laid the groundwork. Romantic poets deepened the theme of spiritual torment and angst, the irresistible lure of ‘the dark tower’, and the Victorian novelists ran riot with all the possibilities that these new areas of insight opened up, from Hogg’s Justified Sinner to the shivery crime novels of Wilkie Collins. Le Fanu is part of that coterie of writers whose work is forged in the inquiry into how tricks and illusions undercut a sense of reality, the deliberate attempt to disturb the balance of a rational mind, a sinister interference with a fragile psyche as a prelude to betrayal, fraud, incarceration, violence.

The effect of these scary workings is to instil terror, causing such a radical shift in the foundation of what a character believes to be so that they cease to have any firm grip on what is actually so. Radcliff draws a distinction between terror – perhaps what the character in the novel experiences – and horror, the effect of that on the reader:

‘Terror and Horror are so far opposite, that the first expands the soul and awakens the faculties to a high degree of life; the other contracts, freezes and nearly annihilates them.’ (On the Supernatural)…terror, ‘dread, fright,’ and horror, the bristling of nape hairs.

Le Fanu is a master at inciting both.

Maud, protected by a reclusive, gloomy father, is a motherless heiress. She tells the story of how she comes to live in the remote Derbyshire home of her uncle, Silas, once a notorious rake, now converted to pious Christianity. And which does she see? Who he was or who he has become? The household is also home to a dissolute male cousin, a simpleton of a female cousin, a dodgy servant with a peg leg, a virago of a French governess. The sombre mansion, Bartram-Haugh, in vast parkland - mists at dawn and dusk, eerie noises and flitting movements, essentials of Le Fanu’s atmospherics – contributes to the vivid painting of scene, a very cinematic trope, much favoured in fiction of the time. There was fog, they used fog. And fog as symbol, because the conspiracy to deprive Maud of her wealth hinges on befogging her so that she is at sea, uncertain of where solid grounding is.

Her father dies. Now she is alone and unprotected, tied by a promise to remain a guest of Silas for three and a half years, until she achieves her maturity. If she dies in that time, the money goes to Silas. Her father appears to her in a dream (hallucination?):

‘This night my dear father’s face troubled me – sometimes white and sharp as ivory, sometimes strangely transparent like glass, sometimes all hanging in cadaverous folds, always with the same unnatural expression of diabolical fury. From this dreadful vision I could only escape by sitting up and staring at the light.’

She does, eventually, fall asleep, but in a dream hears her father’s voice, distinctly ‘outside the bed-curtain: “Maud, we shall be late at Bartram-Haugh.”’

Outside the bed-curtain…she’s confined in a four-poster, vulnerable, a prey to what prowls beyond it, and now what is she to believe of what she sees and hears? There is even passing reference to Bluebeard at one point.

Forewarned by whisper, enigmatic comment and her own intuition, she manages to evade the attempt to overpower her – with drugged claret – and watches, from a hiding place, the murder of a victim intended to be her.

It ends…but you must see how, and then move on, perhaps, to Wylders Hand. 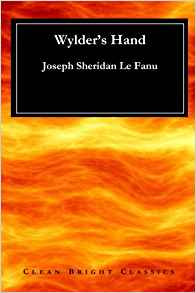