'I NEVER READ MY REVIEWS' by guest Paul Dowswell 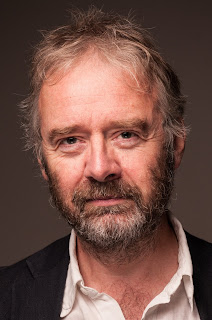 "When you’ve spent the best part of a year alone in your study labouring on something, you need more than your partner to tell you ‘it’s good’ and your mum to trill ‘it’s marvellous, darling’."

Paul Dowswell writes historical fiction and is a frequent visitor to schools, both home and abroad, where he talks about his books and takes creative writing classes. His novels Eleven Eleven and Sektion 20 won the Historical Association Young Quills Award and Ausländer won the Hamelin Associazione Culturale Book Prize. Paul is a Fellow of the English Association and reviews books for Armadillo and Carousel.

Only the very richest or most modest writers can say ‘I never read my reviews’. Being a teen/young adult novelist who is neither of these things, I’m happy to tell you I read my reviews avidly. If it’s a good one I might think ‘Yes, that’s exactly what I was trying to do’ or conversely ‘Blimey, was I doing that?’ - a bit like the Beatles when a classical music critic praised their ‘flat submediant key switches’ and ‘Aeolian cadences’…


The chances of being reviewed have gone through the roof over the last 20 years. When I started off, you considered yourself lucky to be reviewed in any print medium – from specialist journals to national newspapers. These days any old fruitcake can contribute to a plethora of on-line review sites. (And they certainly do.) And although on-line reviews are always interesting to read, and more often written by the non-fruitcake fraternity, the variable quality of these reviews does diminish the weight attached to them.

My favourite review came from a non-fiction book of survival stories I wrote for early-teens nearly twenty five years ago. The Books for Keeps reviewer said ‘Any book that keeps me, my 14-year-old son and my 75-year-old dad intrigued and entertained has got to be a winner.’ Job done. I’m still proud of that.

But bad reviews are an altogether different kettle of piranhas and I’ll be deeply alarmed by one, unless it’s on Goodreads, when I might just feel irritated. (More of that later.)

The worst review I ever had was for my first novel Powder Monkey, about a young sailor in Nelson’s navy called Sam, which appeared in an online journal. The reviewer was an academic whose speciality is children’s fiction, and she wrote such an excoriating hatchet job it couldn’t have been worse if I’d just burned her house down with a flamethrower. I was distraught - not least because this was the first review of the first fiction I’d written and I thought ‘Oh no, I’ve been found out.’

Sam and the other characters exist (as)… wooden figures within the wooden walls, like two-dimensional cutouts in a museum diorama; they lack vitality, depth, and humanity. …there is little to attract novel readers, and nothing at all for girls...

I felt sick with anxiety and disappointment for several days, wondering if any other reviews would be so damning. Fortunately, in one glorious weekend shortly afterwards, two other reviews appeared in the Independent and the Sunday Times, both of which praised the book to the hilt. Champagne (or maybe it was prosecco) was cracked open.

The funniest bad review I got was from a girl who absolutely detested my East German novel Sektion 20, and took out her rage in the reviews section of a Northern Irish book award website. I had added a few German words to make the speech a little more Germanic - things like Mὕtter and Vater and Fräulein - nothing too complex and certainly nothing that would have foxed your average Beano reader. But my reviewer was incensed.

WHAT A NIGHTMARE!!! I didn't like this book at all - it was horrible. I normally like reading books about wars but this was just B.O.R.I.N.G!! I absolutely hated every second of it. Let's see why I hated it so much... (1) the way half of it was in a different language I could not understand at all. (2) the characters…

There follows eight lines of angry ranting. And then concluded:

… Paul if you ever read this - here is a little tip...PUT IN A TRANSLATOR WE DON'T KNOW HOW TO SPEAK WHATEVER LANGUAGE IT IS!! I am going to give this book a 1.

I sent the review to my brother, who declared ‘She sounds like xxxxxxx xxxxxxxx* after three lines of coke.’ She certainly had a vivid style, although I’m sure she hadn’t been at the white powder. Maybe she ought to try for a career as a tabloid columnist. I suppose she’d been made to read it as part of her school’s participation in the book award, but she’d resented it so hugely she was very keen to let me know about it. Fortunately the book did go on to win a book prize, but not that one.

But sometimes the mouths of babes and sucklings speak uncomfortable truths. My previous book The Cabinet of Curiosities was set in pre-Renaissance Prague and well off the beaten track of the First and Second World War, and the Nazis, Romans and Tudors – the key Historical Fiction eras any novelist steps away from at their peril. The first review I saw, on Goodreads I think, just said ‘This book is of no interest to me’. My editor agreed. After this one bombed, she said ‘Best stick to the 20th Century’, advice I have followed to this day. (My brother, incidentally, thought Cabinet of Curiosities was my best book... so there’s no accounting for taste.)

On the subject of Goodreads I have to say I detest the know-all, judgemental tone of some of the reviewers. (‘I was horribly bored…’) And I also know several other writers who agree with me. (So there, know-all, judgemental Goodreads reviewers!) I only know it for the children's and young adult reviews and don’t know whether those for adult books can be just as snotty.

Amazon reviews aren’t nearly so bad and opinionated – perhaps because most of them are positive unless the reviewer has a grudge or wants to complain about shoddy goods. Maybe Goodreads is the place to go if you’ve been made to read a book against your will and want to share your pain with the author? One writer friend of mine thinks it’s because it’s a social media community, and that automatically makes it more prone to vituperative comments. I sometimes wonder if schools require their pupils to post reviews as part of a reading project – but whatever the reason for it, it’s made Goodreads reviews inessential, and feedback I got from fellow-writers about this ranged from ‘Here be dragons’ to ‘I never look at it.’ One of my writer friends pointed out how contradictory some of these reviews can be – complaining about how slow the plot is whilst bemoaning the lack of development in minor characters, for example. Or moaning about a young adult book being ‘obviously written for children’. This is a shame because many of the reviews there are excellently written.

So why are reviews important? Well, it nice to get a pat on the back from a stranger, or even better, a respected broadsheet reviewer. When you’ve spent the best part of a year alone in your study labouring on something, you need more than your partner to tell you ‘it’s good’ and your mum to trill ‘it’s marvellous, darling’. But reviews, along with book prizes, are also a splendid way of letting a school know you might be worth inviting in. Likewise, positive reviews are also bait for foreign publishers and that’s always a good thing. And letting your editor/publisher know someone thinks you are a class act can’t do anyone any harm.

I review books myself now, for a couple of journals, and this can be quite a moral conundrum. Most of the time I try and provide a sound bite in my review that can be picked out for a nice little quote. No problem if I like the book, but tricky if I don’t. I reviewed one young adult story, written by an American author, which reimagined the Second World War as fought by young women in combat roles as well as men, presumably for a parochial female readership uninterested in reading about characters who aren’t exactly like themselves. But I could see it was an exciting page turner and said so. (‘…highly readable and sometimes unbearably exciting.’)

Likewise, another book I read – again by an American author – had a plot where every good character was Jewish and every bad character was a Slav. Paris, Prague and Rome are depicted as crime-ridden cess pits – this is fiction for the sort of Fox News ‘expert’ who thinks Birmingham is a no-go area for non-Muslims. But it was still an exciting story and the publishers quoted from my review – although not the bit about its uncomfortable racial bias. (‘…It’s certainly a page turner, and I enjoyed its visceral action.’) Incidentally, in case anyone detects an anti-American bias in this, my two favourite novels of the last ten years have both been by American writers.

I’ve only been asked to review one book I unconditionally detested, a balls-achingly mawkish teen drama with a cover showing three characters staring up at the Milky Way. (One of the characters is ‘a soft candle lighting up a dark room’. I rest my case.) Being a do-as-you-would-be-done-by sort of chap, I wondered about sending it in, but then I realised the writer had thousands of reviews on Amazon and was an international best seller so whatever ‘Disgruntled of Wolverhampton’ said about him was entirely of no consequence. So off it went. Alas the editor spiked it, for which I have still not forgiven her...

Postscript. My mother has asked me to point out that she does not trill ‘It’s marvellous, darling,’ whenever I send her one of my books to read.