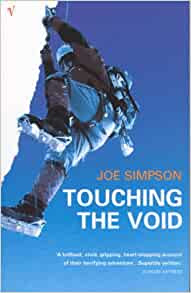 "It seems that he relived the experience in vivid detail through his writing, capturing the extremes of terror and anguish but also of giddy exhilaration ..." 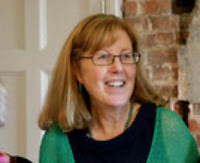 Linda Newbery has written many novels for young readers and one for adults, Quarter Past Two on a Wednesday Afternoon (published in paperback as Missing Rose). Her Victorian Gothic young adult novel, Set in Stone, was children's category winner in the Costa Book Awards. She is currently working on a new novel and completing a non-fiction title which will be published this year.

Just looking at that cover is enough to make my stomach lurch in fear. But, although my own experience is limited to walking to easy summits with at most a little rock-scrambling, I love the lure of mountains and am fascinated by the courage and single-mindedness, even fanaticism, of those who tackle forbidding heights.

I read Joe Simpson's account of his extraordinary near-death experience in the Peruvian Andes many years ago, and have seen the Kevin Macdonald film. This time I listened on Audible, and although obviously I knew the outcome - and so does everyone, as here's Joe Simpson writing about it - I was as gripped as on my first reading.

The facts of what happened on the slopes of Siula Grande are well known far beyond mountaineering circles. With climbing partner Simon Yates, Joe completes the ascent of the treacherous, previously unclimbed, 4,500-foot West Face of the mountain. Shortly after they begin to descend, Joe falls, fracturing his leg and driving his tibia through his knee. With conditions worsening, no fuel for their stove and no food left, they attempt to descend quickly to the glacier, Simon supporting his partner on a rope from above, but he inadvertently lowers Joe over a sheer drop. Knowing that both are in mortal danger, and slipping from a snow ledge himself, Simon cuts the rope, sending Joe to (as he presumes) his death.

Joe Simpson has always made it clear that he doesn't blame Yates; it seems to be climbers' ethos that anyone in that dreadful situation would do the same. But Joe, instead of falling to his death, plunges into a crevasse, landing on a snow bridge. Astonished at still being alive he finds himself in darkness and extreme cold, with frostbitten fingers, a fathomless drop beneath him, an excruciating injury, fading torch battery and no provisions … Yet against fearsome odds he slowly extricates himself, facing then a long, agonised crawl over glacier and boulder fields before reaching the relative safety of base camp. Even then - will he reach camp (itself the height of Mont Blanc, and two days' rough walking from the nearest village) before Simon and their waiting colleague Richard depart for Lima, as surely they will, with no reason to wait? It says much for the skill of the writing that even though Joe obviously does make it, tension remains high.

Whether your knowledge of climbing paraphernalia and techniques is greater or less than mine, it's a mesmerising read. A large part of the appeal is that while describing his 25-year-old self in retrospect as "bold, ambitious, or even a little crazy ... too much testosterone and too little imagination," Joe Simpson is also frank about his feelings of weakness and despair. Though loth to let Simon see how scared he is at particularly dangerous moments of the ascent - his tough, capable persona must be maintained - to us he lets the mask slip. It seems that he relived the experience in vivid detail through his writing, capturing the extremes of terror and anguish but also of exhilaration. There is so much I could pick out, but I’ll just give these samples:
On reaching the summit: "I felt the usual anticlimax. What now? It was a vicious circle. If you succeed with one dream, you come back to square one and it's not long before you're conjuring up another, slightly harder, a bit more ambitious - a bit more dangerous. I didn't like the thought of where it might be leading me ... the very nature of the game was controlling me, taking me towards a logical and frightening conclusion."
After the first fall: "We both knew the truth, it was very simple. I was injured and unlikely to survive. Simon could get down alone. While I waited on his actions, it felt as if I was holding something terrifyingly fragile and precious." Simon could, he realises, simply leave him there to die.
When he emerges from the crevasse and realises that his struggle is far from over: “I would probably die out there amid those boulders. The thought didn’t alarm me. It seemed reasonable, matter-of-fact … If I died, well, that wasn’t so surprising, but I wouldn’t have just waited for it to happen. The horror of dying no longer affected me as it had in the crevasse … In a peculiar way it was refreshing to be faced with simple choices … I had never been so entirely alone, and although this alarmed me it also gave me strength.”

In a new epilogue, following the making of the film, Joe wonders what course his life would have taken without his Siula Grande experience, concluding that he’d have looked for more and more extreme challenges and probably killed himself in the process, as many of his peers have. Instead, although he continued climbing, the international success of Touching the Void launched a career as writer and speaker.

I think I’ll continue my armchair mountaineering with another Joe Simpson memoir, This Game of Ghosts. Who else can’t resist mountain books? What do you recommend?

Touching the Void is published by Vintage.

The Audiobook is read by Daniel Weyman (Joe) and Andrew Wincott (Simon), with an introduction by Chris Bonington.