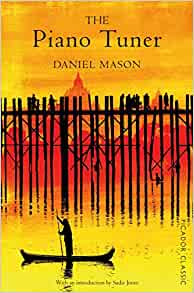 "It’s a first novel but comes with the glow of deep thought, deliberate craft and essential care in construction and development."

How many books out there lurk, unnoticed, to be read? To be found, a word from a friend, a casual hand reaching for a title all but lost in a pile of discards? The chance of serendipity, the unlooked-for discovery or gift at birthday or Christmas? And what delight to come upon the hidden gem. And then to have the pleasure of passing on the news of it.

You know by now that I do not relate the story of the books I speak of here. I don’t read blurbs even if that jeopardises the already onerous, the unforgiving task of writing them. I will note but briefly some of the traits of this book which linger and make me want to broadcast its virtues more widely. It’s well-written, the characters live and breathe. The story is compelling, the layers of richness, in narrative, outreach, idea, many.

Tuner of pianos speaks for itself and you hardly need me to point to the metaphorical force of this: the adjustment of tension so that the instrument plays in tune….and what care, expertise, consideration, understanding, thought would go into adjusting the tensions in our own currently jangled society? An epigraph Mason chooses, from Plutarch: ‘Music, to create harmony, must investigate discord.’ ’tis well said.

The setting is British Burma of the final years of the nineteenth century but do not be deterred. Mason wears his research lightly. He gives context and, where necessary, background, but the information is neither stifling nor overwhelming. The action begins in London before moving eastwards and the detail is deftly managed. One example of how well he interleaves learnt material from imagined: the British protagonist makes an expedition into the jungle in the company of a local. They are followed by a gaggle of local children, drawn to this wonder, this exotic, the stranger with his odd purpose. They banter and chatter and make a nuisance of themselves, the Brit is discombobulated and, to help him, the local rounds on the gang of urchins to reprove them. They back off. ‘What did you say?’ asks the Brit. ‘I told them that you eat children.’ This upsets the man; the local laughs: ‘Don’t be upset, we have giants in our folklore who eat annoying children.’ ‘Perhaps not the best way for us to be perceived, however.’ And the matter is closed. However, a nice story cleverly used.

Names of places familiar from tradition and romance loom: Mandalay, Rangoon, Irawaddy, Siam; Burma, the fabled land, hemmed in by old China, India, Bengal, the oriental sea. If the premise might seem to be unlikely, the setting is perfect for the oddity and there is something quite beguiling in the mechanics of turning the key on the poorly strung wires to make the sickly piano sing once more. There is unlikely drama, too, in the onward tug of the narrative, nothing forced, to a fine dramatic conclusion.

I opened the book, began to read and knew, after a very short time, that it would be my companion for a while, this at a time when I have found some novels really quite difficult and lacking in sustained or even rudimentary charm or seduction. No names, no pack drill, even if the temptation to lard this notice with a number of titles – vaunted winners of glittering prizes – is powerful. A gushing review is enough, it seems, these days, to trigger further spate of gushing review, without basis or sense. I hope, therefore, that in the course of my recommendations here, I have proved an honest broker. There’s no point in fibbing or hyperbole.

I enjoyed The Piano Tuner immensely. It’s a first novel but comes with the glow of deep thought, deliberate craft and essential care in construction and development, the dashes of colour, evocative:

‘There was a statue in the spirit house, a faded wooden sprite with a sad smile and a broken hand. Edgar stopped in the road and took the paper (‘For Edgar Drake who has tasted.’) from his pocket, and read it once again. He folded it and tucked it next to the little statue, I leave you a story, he said.

He walked and the sky was light but he saw no sun.’

The writing is full where it needs to be full and spare when that suggests, a finely tuned instrument with pedal effects.

(Érard was the first maker in Paris to fit pedals on the piano, and his instrument had several: the usual sustaining pedal, an action shift, a celeste, and a bassoon pedal (which put leather against the strings to make them buzz).
The Piano Tuner is published by Picador.
More reviews by Graeme Fife:
House of Glass by Hadley Freeman
A Telling of Stones by Neil Rackham
West of Sunset by Stuart O'Nan
Adolfo Kaminsky: a Forger's Life by Sarah Kaminsky
Uncle Silas by Sheridan Le Fanu
Beside the Ocean of Time by George Mackay Brown
Moby Dick by Herman Melville
Posted by Linda Newbery at 00:00