Guest review by Lesli Wilson: WHAT YOU CAN SEE FROM HERE by Mariana Leky 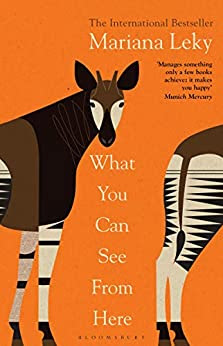 "With its humour, its unsentimental humanity, and its intimacy, it's a pretty good place to inhabit..." 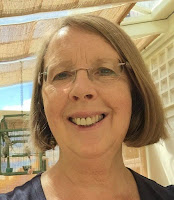 Lesli Wilson is the author of two novels for adults and two for young adults. Last Train from Kummersdorf was shortlisted for the Guardian Children's Fiction Prize and the Branford Boase Award; Saving Rafael was nominated for the Carnegie Medal and Highly Commended for the Southern Schools Book Award. Both deal with Nazi Germany. Lesli Wilson is half German, was brought up bilingual, and has spent considerable amounts of time in Germany. She is currently working on a novel for adults, set in the very early nineteenth century.

'An okapi is completely implausible, every bit as implausible, in fact, as the sinister dreams of a woman from the Westerwald.'

The Westerwald (the name means Western Forest), lies a little way to the east of the Rhine. Its tourist site describes it as 'dreamfully unspoilt,' which is amusing, since the entire plot of this novel, set in that area, hinges on the dreams of the narrator's grandmother, Selma. If you want to know what Selma looks like, you can look up Rudi Carrell, the Dutch television host on the Internet. Selma 'resembled Rudi Carrell so perfectly that.. in our eyes, he was nothing more than a poor copy of Selma.' However, Selma has several characteristics that differentiate her from Rudi, unless Rudi also used to have dreams of an okapi that meant one person in his neighbourhood was going to die within days.

When Selma dreams of the okapi, she tells two people and swears them to secrecy; which means, inevitably, that the news runs round the neighbourhood like wildfire, creating havoc in the lives of its inhabitants. Some become deeply risk-averse, avoiding animals, even gentle old dogs, looking up to rule out falling rooftiles, branches, or heavy light fixtures, constantly checking themselves for signs of an incipient heart attack. An old farmer who feels he's lived too long lies in his bed and prepares to welcome death; in vain, as it turns out. Others vent long-kept hidden truths, which they might as well reveal before they die; 'A secret truth does not want to perish in hiding.' The survivors then, of course, have to live with the consequences of this frankness.

One of this latter category is the Optician (the otherwise excellent translator doesn’t capitalise the name, but I would have done; all nouns, of course, are capitalised in German, but I sensed what you might call a special capitalisation there. The Optician is Selma's best friend, and he has helped her bring up her granddaughter, the narrator Luise, and Luise's best friend Martin. Luise's mother and father have other preoccupations that prevent them from playing much of a role in her life. Martin's father is an alcoholic and physically abusive. The Optician has loved Selma for years, but his mind is populated by doubting voices that prevent him telling her so, and in the end, even the prospect of imminent death can silence them.

This is not a novel about how people behave in the face of death, however, or even about the emergence of long-held secrets, though that enters into the plot. It's primarily about people, how they relate to each other, how they love, or hide from love; how they hurt each other and heal.  The characters are presented with wry, ironic, sometimes dark humour. There's a reclusive woman (euphemistically named 'sad Marlies') who lives to hurt other people; her  aunt hanged herself in her kitchen  at the age of ninety two 'which Marlies could not understand. In her opinion, committing suicide at ninety-two was hardly worth the trouble.' There's Elsbeth, Luise's great aunt by marriage, small and circular, who purveys potions to the villagers: they slip into her garden 'with their coat collars turned up' and look around several times 'the way men in the county seat turn up their collars and look around when they opened the door to Gaby's Erotic boutique.' When the Optician tries to kill Martin's father by sawing through the legs of his hunting blind (a tower that hunters in Germany climb onto so they can see the game from a distance,) he repents and rushes off to repair it. But he has confided what he's done to Elsbeth, and when he arrives she's already there, trying to do the job with wire and superglue. The ensuing dialogue, which becomes three-cornered when they discover that their intended victim is actually up in the hunting blind as they work, is a triumph of comedy. But the book also contains tragedy and sadness, joy, and many different varieties of love.

It's a piece of fiction which is hard to categorise, quite different from anything else I have read recently. With its humour, its unsentimental humanity, and its intimacy, it's a pretty good place to inhabit; a book to keep on your shelves after you've finished it, and revisit again and again.

What You Can See From Here is published by Bloomsbury.
Posted by Linda Newbery at 00:00