THE INVENTION OF NATURE: the Adventures of Alexander von Humboldt, the Lost Hero of Science, by Andrea Wulf, reviewed by Linda Newbery 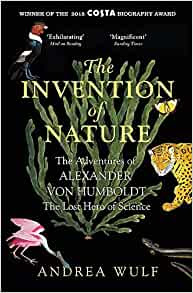 "Why isn't he as widely acknowledged as Charles Darwin as a key figure in our understanding of nature?" 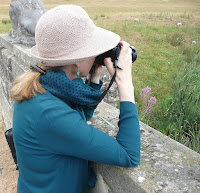 Linda Newbery edits Writers Review. Her young adult novel Set in Stone was a Costa category winner; she has published widely for young readers, and is currently working on a new adult novel. Her non-fiction title This Book is Cruelty-Free: Animals and Us will be published in July by Pavilion Books.
What an amazing man Alexander von Humboldt was - one of those driven people who achieves enough to fill ten lives. Yet until I heard about Andrea Wulf's book when it won the Costa Biography prize in 2015, the name Humboldt meant little to me beyond the Humboldt current in the Pacific and the Humboldt penguin. In fact, he has more animals and plants named after him than anyone else – as well as the Mare Humboldtianum, an impact basin, or ‘sea’, on the moon. He was so influential that I’m astonished he isn't a household name, like Charles Darwin, and Wulf's subtitle reflects this: The Adventures of Alexander von Humboldt, the Lost Hero of Science.
Born into a wealthy Prussian family in 1769, he loved collecting and labelling shells, insects and plants from an early age. His father, an army officer, died when Alexander was nine, and he was brought up by his rather distant mother, who sent him to study government and politics. Alexander rejected this planned career in favour of natural history, and became a tireless traveller, explorer, collector, writer, observer and interpreter of the natural world.

While still in his twenties he came to the realisation that nature forms ecosystems, such a key concept today. His term for this was Naturgemälde, in which – unlike other naturalists of his day, who focused on identifying, naming and categorising as if species lived in isolation – he saw that natural systems form a complex, interdependent web. Not only that, but as early as 1800 he foresaw that human intervention had the potential to disrupt the climate; he described "mankind's mishief ... which disturbs nature's order".  More than two hundred years later we're still waiting for this to be fully acknowledged by world leaders.

His earliest travels, in his twenties, were in Venezuela, where he climbed mountains and volcanoes, studied vegetation and made detailed notes on climate zones. From then on, he wrote and published copiously, starting with botany, progressing through his seven-volume Personal Narrative, which combined scientific study with travelogue. Through further travels in South America he observed the damaging effects of Spanish colonialism on indigenous peoples. He advised Thomas Jefferson on the likely effects of independence from Spain and how it might affect the United States; throughout his life he was an outspoken critic of slavery. His influence also set Simon Bolivar on his campaign to free south American from Spanish rule. Wulf points out his contradictions, though – while approving of revolution, he served for years as court chamberlain to the German King Friedrich Wilhelm IV.

His view that nature calls for an emotional response alongside scientific interest  (he wrote like a poet, one reviewer said) inspired the Romantic poets – Wordsworth and Coleridge are known to have read his books, and Byron directly referred to Humboldt in Don Juan. And Charles Darwin had Humboldt’s Personal Narrative in his cabin on the Beagle, ­annotated with his own comments. Reading these, Wulf says, is like eavesdropping on a conversation between the two. For Darwin, Humboldt was such a key influence that he rather nervously sent the older man a copy of The Voyage of the Beagle, and was delighted when Humboldt replied with detailed appreciation. ‘Few things in my life have gratified me more,’ Darwin wrote; ‘even a young author cannot gorge such a mouthful of flattery.’ We’re so used to seeing Charles Darwin as the bearded, venerable grandfather of natural science that it’s intriguing to see him here, responding as any novice author would to praise from a much-admired elder.

Possibly, Humboldt’s ‘web of life’ idea is also behind James Lovelock’s Gaia hypothesis – that the Earth, as a whole, is a living thing, capable of regulating itself (if not destroyed by excesses of human interference). Certainly it was the impetus behind Man and Nature, by George Perkins Marsh, which elaborated on Humboldt’s idea that humans would have a disastrous effect on the natural world. Marsh even foresaw that animal agriculture and meat-eating would deplete natural resources, and that vegetarianism is far more sustainable. Henry David Thoreau’s Walden also owes much to Humboldt’s writings. and Wulf believes that Humboldt was the first to produce nature writing as we think of it now..

The energy and drive of this remarkable man lasted well into his eighties – when he died, at 89, he was still working on a massive, multi-volume project, Cosmos, which aimed to bring everything – animals, plants, geology, oceans and even the sun and stars into one consummate study.

If you’re interested in nature, exploration, the history of science and how we see ourselves in relation to the natural world, I’m sure you’ll enjoy this richly informative book as much as I have. Perhaps Humboldt’s ideas, revolutionary in their time, strike us now with a new and pertinent force.
So why has he slipped from view? Why isn't he as widely acknowledged as Charles Darwin as a key figure in our understanding of nature? Wulf suggests that, firstly, he was writing at a time when generalism in science was being replaced by specialist disciplines; and secondly, that anti-German feeling in Britain and the USA began to play its part. Still, Wulf concludes that "Environmentalists, ecologists and nature writers today remain firmly founded in Humboldt's vision - although many have never heard of him. Nevertheless, Humboldt is their founding father."
The Invention of Nature is published by John Murray.