Easter Saturday extra: guest feature by Paul Dowswell. RETURN TO SENDER - A PORTRAIT OF THE ARTIST AS A YOUNG CLOT 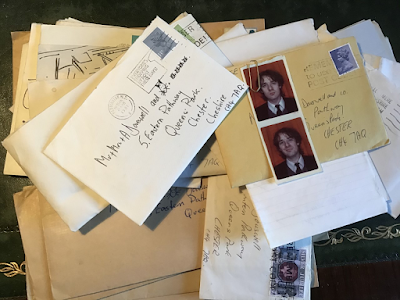 "Imagine my surprise when I was sacked at the end of the week..."

When there’s not a pandemic going on, Paul Dowswell writes historical fiction and is a frequent visitor to schools, both home and abroad, where he talks about his books and takes creative writing classes. His novels Eleven Eleven and Sektion 20 won the Historical Association Young Quills Award and Ausländer won the Hamelin Associazione Culturale Book Prize and the Trinity Schools Book Award. Recently he has become increasingly concerned about how deranged he looks in Zoom calls.
Readers of  Writers Review will no doubt be familiar with the joke about the rabbit who goes into the butchers and asks ‘Got any carrots?’ The butcher tells him he doesn’t sell carrots. But following four days of the same repeated request from the rabbit the butcher loses his temper and says ‘If you EVER ask me for carrots again, I’m going to nail your ears to the floor.’

The rabbit comes back the next days and says ‘Got any nails?’

The butcher looks perplexed and shakes his head.

‘Got any carrots?’ asks the rabbit.

Reader, as a young man, I was that rabbit.

And evidence of that rabbithood is everywhere in a bundle of my letters home from the age of 13 to 23, which I found whilst recently clearing out my mum’s house.

The early 70s found me incarcerated in a horrible little boarding school in the depths of Shropshire, where, unlike Byron at Harrow, I didn’t spend my pre-University years translating The Iliad from the original Greek into Latin. I was an academic mediocrity. I did write a lot of letters home though. And here, in defiance of the widely held view that texts and emails have destroyed the traditional art of letter writing, I present an extract from my letter home from November 27, 1972:

On Thursday there was the House Music competition. We came 4th. (Woe!) On a happy note I’ve had dioreaha (or however you spell it) recently.’

Having cocked up my A Levels I got into Goldsmiths’ in 1975 via the clearing system and read History – a subject I wasn’t terribly interested in at the time. Not a lot of work was done. On Nov 3, 1977 I wrote home ‘As for me, I’m ill at the moment – it’s sort of bronchitis and Flu and I don’t feel so good. However I’m taking good care of myself and getting lots of sleep.’

I obviously had no understanding of the laws of cause and effect, for in the very next paragraph I write: ‘John and Johnny P. (my brother and his best friend) came down this last weekend… we played a ridiculous game of spin the knife the low/high point of which was me having to take a paddle in the birdbath, John whipping himself around the garden, and Johnny having to squirt lemon juice down his throat (blaaaaghhh). We got utterly wrecked on Saturday night and all ended up sprawled on the floor playing I-spy and with Johnny P. drinking Italian plonk from his boot.’

I finished with the reassuring words ‘p.s. am taking approx. 5,000 pills a day so don’t worry.’

Other letters from university are full of ramblings about the travails of my rotten band. My dear dad, who hated rock music, wouldn’t have been remotely interested. ‘We did two gigs this week – One on Tuesday at a Psychology society Party at College + the other at some Greenwich rowing club on Friday. The psychology one was alright – only trouble was **** broke a lead, thus we balled up things a bit. The one on Friday was a disaster. **** broke a string and we lost the attention of what little audience we had.’

A pattern was emerging.

I graduated in 1978, and moved to a grisly bedsit in New Cross Gate. (‘Paul’s room is not so bad,’ wrote my girlfriend to my parents, ‘just a bit scabby – but there aren’t any cockroaches or rats.’) Eventually I found work at a market research company, where I collated surveys on fork-lift truck lubricating oil. Desperate to escape, and still not really having A CLUE what to do, I enrolled on a teacher training course back at Goldsmiths’ College. Nowadays, my respect for the teaching profession knows no bounds, but back in 1979 I wasn’t so sure. My course, I wrote to my mum, herself a teacher, ’… contains a million bossy girls/women all called SUSAN (no Sue, Suzie, Suzanne etc just SUSAN) who have been nursing a burning desire to teach since they lined their dollies up at the age of three and told them off for not doing their homework.‘

The autumn of 1980 found me on the dole (again) and subject to the whims of the job centre, who sent me to Woolworths head office on Marylebone Road to act as a security guard in their impressive glass and marble foyer. ‘It’s crushingly boring beyond belief and only suitable for the lobotomised and those in a deep opium trance,’ I wrote home. ‘I try and keep myself amused by seeing which hurts the most when I bang my head on it, (Of Marble, Glass, Plaster and Plastic, Marble is by far the worst), and breathing on the main glass door and drawing Anarchy signs in the condensation.’

Imagine my surprise when I was sacked at the end of the week.

But other more exciting opportunities in the world of work were presenting themselves. One, in particular, promised a life-changing turn in the road. At 22/23 I was desperate to work for the BBC and understood the important thing was to get in, doing anything, and then apply for the more interesting jobs from the inside. With that in mind I wrote home in June 1981 ‘The BBC have been in touch. I had an interview yesterday for a job in the outside broadcasting dept – v. boring – costing transmissions via the G.P.O. (British Telecom)…’

With mounting excitement I relayed the news that ‘the bloke rang that afternoon and told me I didn’t get the job BUT………..

1. They were very impressed (repeated 9 times)

2. The job was ‘way below my capabilities anyway.’

3. He would be in touch with the right people and they would be looking out for a suitable post and I would hear from them shortly.’

40 years later, whenever the phone rings, I still hope that it’ll be them.
See also: I NEVER READ MY REVIEWS, by Paul
Posted by Linda Newbery at 00:00