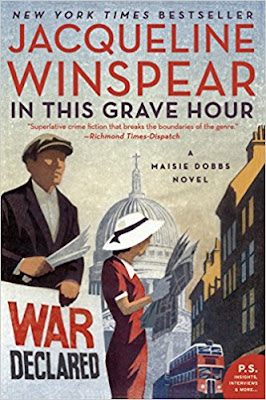 This is the first post in a new occasional feature - we're inviting independent booksellers to tell us about their favourite books. A big thank you to Sam Barnes for starting us off! If you're an independent bookshop and would like to join in, please contact us - we'll be very pleased to welcome you. 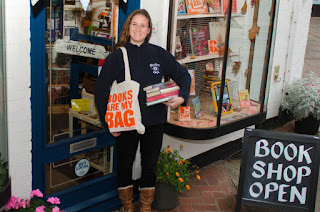 Sam Barnes is the owner of Books & Ink Bookshop, an independent bookshop in Banbury with second hand, antiquarian and new books. Sam opened the shop in 2005 and runs it full time, with a bit of help here and there from family! When not cataloguing stock and running the shop, Sam’s a voracious reader, an occasional review writer, a collector of Edward Ardizzone books and ephemera, and loves to get out exploring the great outdoors with a pair of walking boots and a camera. The bookshop is open Tuesdays to Saturdays but the website is open 24/7.

Sunday 3rd September, 1939, 11:15 am: Neville Chamberlain declares that Britain is now at war with Germany. People across the country sit gathered around wireless radios to hear the pronouncement. Maisie Dobbs joins her dearest friend Priscilla and Priscilla’s family to hear the devastating news; adults, all affected in some way by the previous war, exchange anxious glances with one another, while Priscilla’s teenage boys react in a more excitable way.

This is the opening scene for the 13th Maisie Dobbs mystery from Jacqueline Winspear; a historical mystery series based on the eminently likeable psychologist and private investigator, Maisie. Turning back the clock to book one, the series begins with Maisie setting up her own private detective practice in London in 1929. An independent, self-employed young woman setting up in professional practice in the 1920s - brilliant; I loved Maisie straight away. From the beginning you sense in Maisie a sensitivity, spirituality and sadness - all lending to her interesting and empathetic character - and as the novels progress, she develops into an investigator with a talent for solving crimes where compassion and understanding of the human psyche are frequently involved.

In this novel, frequent mention is made of Maisie’s backstory; her time spent as a frontline nurse in France during the 1914-1918 war and before that, her time spent in service as a young girl before she met a mentor who steered her onto her career path as private investigator. Both elements are important in the story, as thoughts of the first war are uppermost in the minds of everyone old enough to remember, and Maisie’s time in service regularly proves useful to her in her detective work, with her unique ability to find common ground with people of all social backgrounds.

Maisie is called upon by the Belgian Embassy to investigate the murder of a Belgian national, a refugee in Britain from the first war. A police investigation has been launched but, because of the pressures on the security services, the police are content to conclude an open-and-shut case of violent robbery. The Belgian Embassy aren’t happy with the conclusion and hire Maisie to do further digging.

It’s a time of upheaval in London; streets and playgrounds are quiet as children have been evacuated to the countryside; the skies are filled with immense floating shadow-creating barrage balloons; people are nervous and many men and women who came through the first war at great cost and personal sacrifice are now having to endure seeing their barely adult boys sign up to the forces. Maisie’s father and stepmother, living in the Kentish countryside, have some evacuees billeted with them; one of whom is a nameless silent little girl who arrived on the train from London but who does not appear on any records. Amidst trying to solve the case of the Belgian refugee before more murders take place, Maisie and her assistants also take it upon themselves to try and find out the story of the lost little evacuee, to see if they can find a living relative and work out where she has come from and how they can best help her. Themes of loss and displacement are to the fore in this mystery, making the story feel very relevant today, with the plight of refugees, and refugee children in particular, being uppermost in the thoughts and hearts of many.

Jacqueline Winspear creates believable and empathetic characters and paces her stories just right for the theme - page-turning but not at the expense of characters, descriptive writing or historical interest. Maisie comes through each case with grace, humility and prowess - not always successful in her cases but always changed in some small or subtle way, developing with each novel into an interesting and warm human character. While not ‘cosy-crime’ exactly, the series are a light read and the crimes not dwelt up on in great depth - no gore, no terror or forensic uglies. I can’t read (or watch) that sort of crime; it leaves me with an ingrained fear for days. I’d recommend Maisie Dobbs to even the most crime-sensitive readers - and, in fact, all of the readers I’ve recommended Maisie to in the bookshop, have come back for more doses, so that’s a pretty good testament.

In This Grave Hour is published by Allison & Busby.