THE GOLDFINCH by Donna Tartt, reviewed by Linda Newbery 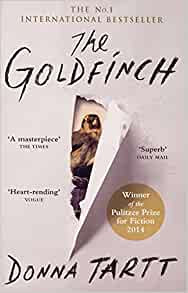 "Donna Tartt is a simply wonderful writer: I was captivated by her descriptions of art, the deft characterisations of even the most minor characters, the setting of scene, the insights and honesty."
Linda Newbery edits Writers Review. Best known for fiction for children and young adults, with titles including the Costa Category winner Set in Stone, she has also published one novel for adults, Quarter Past Two on a Wednesday Afternoon, and is currently working on another. Her latest title, This Book is Cruelty Free: Animals and Us, is a guide to compassionate living for teenagers and adults.
I didn't rush to read The Goldfinch, having given up on Donna Tartt's The Little Friend after reading about a third. Although that's something I rarely do, I was finding it a chore rather than a pleasure; hence my delay in reading this. Now, though, nine years after publication, I've completed it and am full of admiration.
My reading was hybrid: part reading, part listening to the audio version (wonderfully read by David Pittu). At more than 770 pages it's a brick of a book, too heavy to carry on buses and trains, and this tactic made the length seem less daunting, though before long I was absorbed and by the end felt the sense of loss at finishing that great books can leave you with, and a need to return to several episodes for a second reading.
Aged thirteen, Theo Decker survives an explosion that kills his mother and dominates his life from then on. Minutes before the catastrophe, the pair had been admiring The Goldfinch, a painting by the Dutch artist Carel Fabritius, in a New York gallery. In the confusion that follows, the boy tries to help a dying man and a strange, intense bond is formed between them, one that will dictate the course of the adult Theo's life. This elderly man, Welty, a furniture restorer, asks of Theo two things: to take the goldfinch painting, and to go to his shop with a warning for his colleague. Welty's charge, a girl a little younger than Theo, is also badly injured in the explosion, and the two will form a close attachment.
The painting's totemic significance stays with us to the end, prompting meditations on the meaning of art, the power of communication, and the sense of loss. Fabritius was himself killed in a gunpowder explosion at the age of 32, and The Goldfinch (Het puttertje in Dutch) may have been in his workshop at the time. It's a small trompe l'oeil painting showing a beautiful but pitiable finch chained by one leg to a wall-mounted box: kept as a pet or ornament, suffering, unable to escape. That Fabritius painted it in the year of his death adds poignancy. In real life it's safely in the Mauritshuis in The Hague, but in Tartt's novel the painting is taken by Theo who for various reasons keeps it, the secrecy weighing heavy on him: "How had I ever thought I would keep it hidden? I'd meant to deal with the painting for years, get it back where it belonged, and yet somehow I had kept on and on finding reasons not to. To think of it wrapped and sealed uptown make me feel self-erased, blanked-out, as if burying it away had only increased its power and given it a more vital and terrible form. Somehow, even shrouded and entombed in the storage locker, it had worked itself free and into some fraudulent public narrative, a radiance that glowed in the mind of the world."
Theo's father having deserted the family, Theo is for a while looked after by the wealthy parents of a school acquaintance, later being claimed when his father reappears and takes him to a haphazard life in Las Vegas. Here he meets Boris, a Ukrainian boy used to fending for himself, until circumstances force a return to New York. Home and employment are provided by the kindly, self-contained James Hobart (Hobie), Welty's business partner, who introduces Theo to the techniques of furniture restoration. The love with which Hobie practises his craft is touching: "Hobie lived and wafted like some great sea mammal in his own mild atmosphere, the dark brown of tea-stains and tobacco, where every clock in the house said something different, and time didn't actually correspond to the standard measure but instead meandered along at its own sedate tick-tock, obeying the pace of his antique-crowded back-water ... In blameless quiet, he buried himself in his work, steam-bending veneers or hand-threading table legs with a chisel, and his happy absorption floated up from the workshop and diffused through the house with the warmth of a wood-burning stove in winter ... " We sense that lasting security, and mutual love with Pippa, the damaged girl, could be Theo's future, were it not for his involvement in dubious sale deals and the re-emergence of Boris with a revelation that leads him into serious crime.
It's partly a coming-of-age story, partly a crime thriller, and I admit that the convolutions of the latter plot lost me somewhat; I'd struggle to explain in detail who was who and exactly what happened. But, beyond being concerned for the fate of Theo and the painting, this wasn't what interested me most. Donna Tartt is a simply wonderful writer: I was captivated by her descriptions of art, the deft characterisations of even the most minor characters, the setting of scene, the insights and honesty, in this narrative supposedly written by Theo himself. I marked several passages that particularly struck me, but really could have noted something on almost every page - an indication of a brilliant novel. Surely if I return now to The Little Friend I'll find the same qualities there.
The Goldfinch is published by Little, Brown 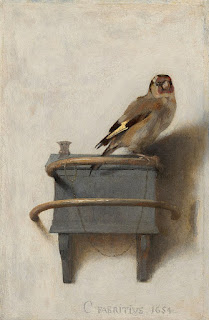 One of my favourite books!

I also loved this book and am heartened that I'm not the only one to supplement my own reading with the audio book version. Will watch the film now alhough I've read some less than glowing reviews of that.

I did not admire Tartt's first book The Secret History so didn't read The Little Friend but my book club chose The Goldfinch so I buckled up - or down - and read it and adored it! Have read it twice. The long desert section could have done with some editing (though Boris is a great character) and I was disappointed by Theo's moral trajectory but Hobie is a wonderful creation. I will read it again.

Have you seen the film, Mary?

I have. I liked some of it very much. Pretty good casting apart from Hobie.