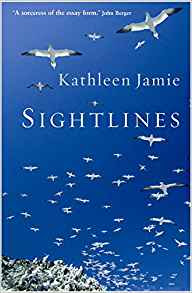 "... the reader is right there with her, feeling the force of a wind strong enough to knock you over, seeing how gannets glint against a storm cloud, shocked at the speed with which killer whales slice through the water."

Sue Purkiss writes for children and young people. She has been a Royal Literary Fellow at Exeter and Bristol Universities, and has also taught English and worked with young offenders. Her latest novel for children, Jack Fortune and the Search for the Hidden Valley, is an adventure story set in the Himalayas at the end of the 18th century, featuring plant hunters, a sacred mountain – and its mysterious guardian! For more information, see Sue's website. She also has her own literary review blog, A Fool on a Hill (where this review first appeared), and is a contributor to The History Girls.

A couple of months ago, I mentioned to a friend that I was about to go on a course on nature writing (at Ty Newydd – I wrote about this on my blog). She chuckled, and said, “Oh, but nature writing’s so boring, isn’t it?”

I was taken aback and lost for words. Now, I would say to her: but what do you even mean by nature writing? How could it be ‘boring’ to read about something which I know she loves, just as I do? How could she not be interested in reading about what gives life to us, and makes our planet apparently unique - and how it is under profound threat?

Or perhaps I’d just give her this book by Kathleen Jamie and say, “Just give this a try. Go on – do.”

Kathleen was one of the tutors on the Ty Newydd course. I had heard of her before, but though I’d given this book to a couple of other people as a present, I hadn’t actually read it myself. I’ve just remedied this, and have found it completely engrossing – and therapeutic. It’s autumn, which is a beautiful season but has at its heart the fading of things – the fading of light, the falling of leaves, the gradual death of flowers. Of course it’s not all bad – there are birds that arrive as well as those that depart, and there are already buds on the bare branches. But still – it’s a season when it’s easy to succumb to a generalised feeling of sadness. And there are one or two things going on in the outside world which are also just a tad worrying.

So there have been mornings when I’ve woken up feeling gloomy. But as soon as I begin to read a chapter of Sightlines, I am taken into another place - and what a relief that is. That is perhaps a cliché: certainly, it’s my stock, easy answer when someone asks me what I like about reading: “A book can take you into another world…” But in this case, it really feels true. The book is a collection of essays. In most of them, Kathleen travels to Scottish islands, though there’s also one where she goes to a Norwegian museum and reflects on whale skeletons (in other essays, she writes about encounters with living whales); another where she decides she needs to see inside the body, not just outside, and examines pathogens under a microscope; another where she recalls an archaeology dig, from which the discovery of the ancient skeleton of a young girl lingers in her mind.

Wherever she goes, she is supremely attentive. She looks, she listens, she tastes, she touches, she thinks, she explores, she reflects. And she does this so effectively that the reader is right there with her, feeling the force of a wind strong enough to knock you over, seeing how gannets glint against a storm cloud, shocked at the speed with which killer whales slice through the water.

But she doesn’t simply describe what she sees. She muses, considers, makes analogies, asks questions. The reader follows not just her physical journeys, but the path her thoughts take. At the back of it all is an awareness of transience. As she says in the book’s final paragraph: "There are myths and fragments which suggest that the sea that we were flying over was once land. Once upon a time, and not so long ago, it was a forest with trees, but the sea rose and covered it over. The wind and sea. Everything else is provisional. A wing’s beat and it’s gone."

(She is flying in a helicopter as she leaves a remote, storm-swept island, where she had found a dead swan, describing its outstretched wing as a full metre of gleaming quartz-white, a white cascade: the swan’s wing, the wind, the helicopter flight – they all link into a chain of thought.)

Sightlines is published by Sort Of Books.

A Telling of Stones by Neil Rackham, reviewed by Graeme Fife

The Outrun by Amy Liptrot, reviewed by Paula Knight
Posted by Linda Newbery at 00:00