Guest review by Graeme Fife: A TELLING OF STONES by Neil Rackham 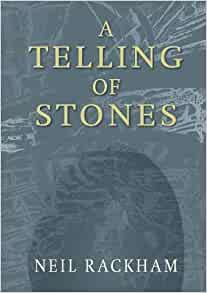 "Fireside lure ... the heady smell of peat, the slight shifts on the chair by the hearth, the storyteller’s enhanced view through the refining aperture of the stone..."

A legend told on Lewis in the Outer Hebrides talks of a storm and a shipwreck – no rarity in those gale-lashed waters – and a princess drowned in a pool below Baile na Cille on the island’s windswept west coast. A princess by her clothes but, strung round her neck, a seeing stone, destined one day to come into the possession of the Brahan Seer.

The story triggered a devouring curiosity in Rackham, who was drawn to the island through lifelong friendship with Catriona Nicholson, in whose cottage near Baile na Cille, where ‘a peat-brown river frets at the edge of the sea’, much of the book was written.

A seeing stone has one or more natural holes piercing it. A small aperture focuses the vision to close definition of distant objects – think the pinhole in a camera obscura – so it’s not surprising that these stones acquired a certain mystique. Not only could an early sailor use one as a sort of proto-telescope, but those with that other sight, the power of divination and prophesy, might associate their powers of foretelling with privileged touch and use of the stone. For, as Rackham tells us, where ‘all stones hold a remembrance of the past, Seeing Stones, or stones of vision, hold memories within them of things yet to come’. This reference to the fluidity of memory – proleptic and analeptic - is central. We dwell in the continuum of memory, whose eddies and currents tug our imagination through the enchantments, the bewitchments, of both light and shadow. The Latin for story, fabula, gives us fabulous, remember, and Rackham’s narrative is charged with the interweave of time and the magic of the stones, the constants of the sea, its everlasting presence and the unpredictability of its moods, of storm-knots and calms, of the troublesome gift of the sight…

The legends grew and the seeing stones acquired a potent force in the island’s saga which extends far across the flint-backed ocean to the other islands and the old kingdoms of Norway and Iceland. The introduction to this fascinating delve into the lore and the Hebridean spinning of magic and metamorphosis – young women into creatures of the briny flood - tells us ‘princes, pedlars, crofters, selkies and the Lewis Chessmen all encounter the awesome power of the Seeing Stone. Even the Blue Men of the Minch who drag folk and ships to a watery death cannot defeat it’.

You know about selkies…? Find them here.

The Brahan Seer, the Lewis Chessmen, The Blue Men of the Minch, that treacherous northern Charybdis, the choppy maw ready to engulf any unwary vessel and its crew…ah, but it’s tempting to reel off the stories recounted in this most absorbing, fascinating book, but this is a review, not the Reader's Digest version.

I begin with the scope and range of its telling. Rackham is a good companion. He tells the stories in an unaffected style, allowing the seduction of their fireside lure to entice without any need to embellish. The heady smell of the peat, the slight shifts on the chair by the hearth, the storyteller’s enhanced view through the refining aperture of the stone. As all good stories begin, there is that moment when the story-teller says, or gestures, behold…The tale of the Seeing Stone leads us into a fine mesh of myth and the importance of myth, for there is no tale without some hinterland of mortal disquiet or rapture, tragedy or wonderment. How else do we make sense of the perplexing riddles of our life but in the fabric of story? Stranger than fiction? You betcha.

Laced through the rich lore which accompanies the stories per se, here, too, are animadversions ‘on the nature of: Foretelling with Stones…Second Sight…Celtic Knots… Ravens…the Penalties of Foretelling…’ this last springing from the moving story of Brahan the Seer, himself.

As in other ancient cultures, a dangerous confrontation may be averted by the challenge of riddles – the Blue men of the Minch fling a cryptic rhyme at the Princess aboard the threatened boat. Undeterred she answers and they, knowing they’re beaten, ‘uttered loud curses and, slipping from the bow, disappeared beneath the waves’.

'It has been said of chance,’ Rackham writes, ‘that although it may be too intricate to understand, it is never without its own purpose.’ Wow. And, my word, what a concluding sequence...when 'all was caught in an eternity of stillness'.

My highest praise of this book, illustrated with superb line drawings by Alisdair Wiseman? It took me, last week, to Lewis.

A Telling of Stones is published by Acair

See also: Beside the Ocean of Time by George Mackay Brown, reviewed by Graeme Fife

The Outrun by Amy Liptrot, reviewed by Paula Knight