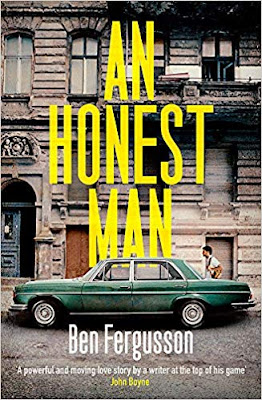 "For me, the closest parallel is a Stephen Poliakoff drama. Fergusson’s novels have all that wit, elegance and attention to detail." ‘The whole world had become unstable, the things that I believed, however laughable it may seem, to be permanent – my girlfriend, my friends, my family, my understanding of myself – had begun to shift. And I had the uneasy feeling that I was just old enough to see these things shifting for the first time, a snapshot of a much longer cycle, a split second in the inestimable history of my own deep time.’

It’s a moment that startles practically every eighteen-year-old, but the voice here is Ralf Dörsam’s, looking midway through his account of his summer in West Berlin, in 1989, living with his respectable parents and goofy younger brother, awaiting the results of exams that will send him to England – his mother’s birthplace – to study geology.

By now, we know he’s living through the Cold War and that the Berlin Wall will fall before his narrative ends. We know he is a parent and has married – but to whom? It’s a question that propels us through this exceptional thriller that’s as much about love as espionage.

An Honest Man is Ben Fergusson’s third novel, following the award-winning The Spring of Kasper Meier and The Other Hoffman Sister. His subject is Berlin, his adopted home, and he sets his novels at different periods of time, in the same house, Windscheidstrasse 53: a nineteenth-century apartment block which bears the scars of war but thrums with the complex, ambiguous relationships of its current inhabitants.

The story starts with Ralf idling his time away with his close group of friends – Stefan, Petra and his girlfriend Maike. It’s the kind of friendship group that thrives on shared interests – they make geeky field trips out into the forests around Berlin studying the natural world – as much as compatibility or attraction. It’s difficult to hide in such a close group, as Ralf finds when he is lured away by his fascination – and growing love – for Oz, a slightly older man, who has begun making a habit of parking his green Mercedes outside Windscheidstrasse 53, watching. Ralf wants to know why.

In Berlin in 1989 suspicion is everywhere and Ralf has form. A childish spy game for Stefan offered Ralf the chance to indulge in his one-sided obsession with his neighbour Tobias. But then Oz reveals his true intent: beneath his cover of a ‘brown-skinned newsagent’s son’, he works in surveillance. He believes that Tobias might be an agent for the East German government. Will Ralf help Oz prove Tobias’s guilt? Of course he’ll do it for love.

Once Ralf starts watching in earnest, so much else is revealed to him, including things about his own family which equip him with the power to destroy it. He gains the capacity to destroy his relationships and himself – will he go to university or stay in Berlin? Will he give up on Maike or will he choose Oz? Or will the choice be taken away from him? His life is unravelling just at the point where tensions all round – amid his own personal circle and the wider political sphere – are tightening. His own safety and security are compromised.

Beautifully done, An Honest Man is exciting, often funny, truthful and enlightening. The fact that Ralf is a geologist is no coincidence – it’s as if millions of years of seismic changes in the make-up of the earth happen to him over a period of weeks. Meticulously researched, it’s full of colour – here’s the food, clothes, TV, etc., of West and East Berlin thirty years ago. It’s a sparky flashback for fans of Deutschland 83 or 86. For me, however, the closest parallel is a Stephen Poliakoff drama. Fergusson’s novels have all that wit, elegance and attention to detail. Like Poliakoff, he celebrates maverick – or subversive or even deviant – behaviour in outwardly unassuming people.

But then, as Ralf painfully learns, once you realise your bedrock, your family, is just like everyone else’s, certainly no better, then you have to follow your heart wherever it leads. In turbulent times the pursuit of honesty might be the only way through.

An Honest Man is published by Little, Brown.