Guest review by Sara Collins: A VISIT FROM THE GOON SQUAD by Jennifer Egan 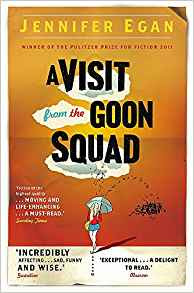 "That rare thing: a novel of breathtaking ambition that actually achieves its aims." 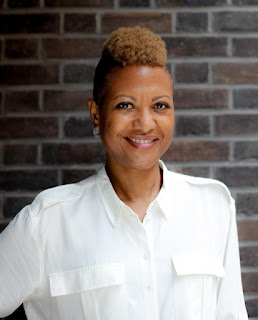 Sara Collins is of Jamaican descent and worked as a lawyer for seventeen years in Cayman, before admitting that what she really wanted to do was write novels. She studied Creative Writing at Cambridge University, winning the 2015 Michael Holroyd Prize, and began to write a book inspired by the idea of 'writing a Gothic novel where the heroine looked like me'. This turned into her first novel, The Confessions of Frannie Langton (reviewed here by guest Stephanie Butland).

A Visit from the Goon Squad stitches together thirteen stories spanning years, places and people: from 1979 to 2021; from New York to Kenya; from Sasha, a kleptomaniac who steals from people but not from stores because “their cold, inert goods didn’t tempt her", to her boss, Bennie Salazar, a record company executive who “sprinkled gold flakes into his coffee – as an aphrodisiac she suspected – and sprayed pesticide in his armpits”. The novel opens with Sasha confessing to her therapist about bringing a date home and stealing his wallet, then we meet Bennie in the next chapter: disillusioned, dissolute, scribbling a list of his most shameful memories -- lunging to kiss a Mother Superior on the mouth, being interrupted in the toilet by a woman he’s lusting after (“Kissing Mother Superior, incompetent, hairball, poppy seeds, on the can”) -- that Sasha mistakes for song titles.

Can we understand each other? From the opening therapy session, to the story told by Sasha’s pre-teen daughter entirely via Powerpoint, to the truncated text messaging of the final chapter (“if thr r children, thr mst b a fUtr, rt?”), this is the question the novel poses. It catalogues the impossibility of true connection, yet at the same time its real charm lies in offering us glimpses of the fleeting intersections of the people in Sasha’s and Bennie’s orbit (children, lovers, friends, bosses), shuffling these mere snapshots and assembling them into a full picture of their lives. Sasha and Bennie are compelling characters -- flawed, selfish and vulnerable, they are the main subjects of this extended meditation on the effect we have on each other, even if only in passing, as well as on how we create music, and on love, family, ambition, and ageing. The book is about their lives and how they come to be in the state we find them in but each story builds an equally fleshed-out sense of the secondary characters as well. We learn as much about them by how they see and speak about Sasha or Bennie as we do about Sasha and Bennie themselves.

What really sets Goon Squad apart for me is the shape-shifting quality of its prose. From powerfully lyrical (Egan describes Sasha’s urge to pilfer an unattended wallet as feeling herself “contract around the object in a single yawn of appetite”) to character conjuring (“I want my death to be an attraction, a spectacle, a mystery”) to sucker punching (“Time’s a goon, right? You gonna let that goon push you around). On her publisher’s website, Egan says she began the book by following her curiosity from one character and situation to the next, which is the way one ends up reading it too. That curiosity is rewarded by a feeling that one has moved through time with the characters, and therefore lived with them and learned with them as well. Reading it, one feels immersed in a world that is always changing, the dizzying experience of being held captive by that rare thing: a novel of breathtaking ambition that actually achieves its aims.

A Visit from the Goon Squad is published by Corsair.
Posted by Linda Newbery at 00:00