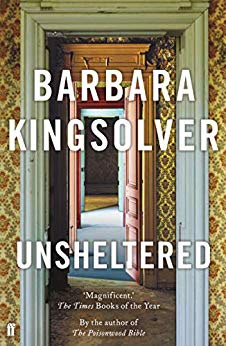 Anna Wilson started out as a picture book editor at Macmillan Children’s Books and went on to be an editor at HarperCollins. She has also freelanced for several years as a fiction editor for Bloomsbury, Puffin and Hachette children’s book publishers. Her writing career began twenty years ago with a picture book, published for very young children. Since then Anna has published over 38 books for children and young teens including picture books, short stories, poems and fiction series. Her books have been chosen for World Book Day and been shortlisted for the Hull Libraries Award and the Lancashire Book of the Year Award. Anna’s recent young fiction series Vlad the World’s Worst Vampire is published by Stripes. Her memoir Missing the Boat is her first adult book.

Anna also gives talks, runs writing workshops in schools and teaches at Bath Spa University on the BA and MA creative writing courses and is a tutor for the Arvon Foundation.

Unsheltered contains two interlinking stories, both set in and around the same house in Vineland, New Jersey and both containing elements taken from real life events. One storyline takes place in 2016 as Trump (referenced as ‘The Bullhorn’ rather than by name) is banging his fist on the campaign-trail podium; the other unfolds in 1871 when Vineland was a community conceived as a Christian utopia by the landowner Charles Landis to give shelter to citizens shaken by the aftermath of the civil war. Kingsolver skilfully interweaves these stories, using the house as a metaphor for ideas built on shaky foundations and for the collapse of ideals and mores taken for granted in both the twenty-first and nineteenth centuries. If this makes the novel sound dry, there are far more ingredients to whet the appetite. This is, at heart, a story of two individuals struggling against similar themes in eras which turn out to be not so different from one another as they might at first appear.

The novel starts in 2016 with Willa Knox. Willa is a woman with more than her fair share of problems: she has inherited a house which, we learn in the first line of the novel, is in such poor shape, ‘The simplest thing would be to tear it down.’ Not only this, but her academic husband Iano has recently lost tenure, forcing the family to move into the ‘shambles’ of a house, her heartbroken adult daughter has come back from Cuba in need of shelter and Willa’s son’s wife has committed suicide, leaving a new born baby in need of love and care. Willa is also caring for her ailing and cantankerous father-in-law. Willa and Iano have worked hard all their lives to provide for their family, but this is not enough. As Willa says, ‘It’s like the rules don’t apply anymore’. But she is strong (at times, perhaps, unbelievably so) and manages to keep her head while all about her, including, one could argue, the house, are losing theirs. She is a journalist and puts her powers of investigation to good use in digging into the archives to find out if the house can benefit from a preservation grant to stop it falling down.

Back in 1871, science teacher Thatcher Greenwood has moved into the house with his new bride and has taken up a post at the local school. He soon runs into problems when he dares to mention Darwin’s theory of evolution in class – something which goes very much against the accepted orthodoxy of the Christian community. He finds solace in friendship with his neighbour, the ‘amateur’ naturalist Mary Treat. Treat, like Landis and his Vineland community, really did exist in 1870s New Jersey and Kingsolver had the benefit of sifting through an incredible amount of correspondence between Treat and Darwin when writing her novel. Nineteenth century Vineland’s blinkered reactions to advances in science versus the accepted status quo tally well with the backdrop to a twenty-first century America which lauds a man who could ‘stand in the middle of Fifth Avenue and shoot somebody, and people would still vote for him’. Indeed, this comment is mirrored by the storyline that unfolds around the real-life murder from which Landis escaped conviction in 1871.

Sometimes split narratives can be unsatisfactory: readers can find themselves preferring one over the other and skipping ahead to get to the story that holds their attention more. I didn’t feel this way, as both Thatcher and Willa held me captive. My only criticism would be that Kingsolver likes to push a point home and sometimes uses her characters as speechifiers, allowing them to stand on their soap boxes for a beat too long. I felt this particularly in the conversations between Willa’s son and daughter who have chosen opposing routes in life: the one as a capitalist wealth-maker, the other as a hippy dreadlock-wearing drop-out. However, the novel ends on a gentle, hopeful note and I was sad to say goodbye to both strands of the story and the engaging characters that people it.

Unsheltered is published by Faber & Faber.
Posted by Linda Newbery at 00:00