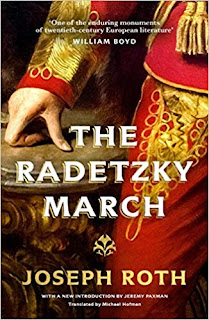 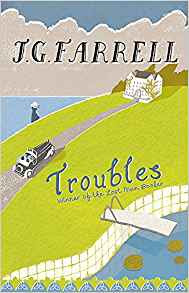 "At this uncertain time of questioning or trumpeting the RuleBritannia mythology, a good moment to revisit two novels about faded glory..."

Graeme Fife has written many plays, stories, features and talks for radio, stage plays and articles for newspapers and magazines, and is now a regular contributor to BBC Radio 4's From Our Own Correspondent. He's the author of a string of books - children's stories, biography and works of history. This year, Thames and Hudson will publish a revised edition of his books on the French Alps. He says, 'I urge everyone to buy books from their independent bookshop, if they're lucky enough - as I am - to have one nearby. If not, by any means possible to counter the sprawl of the online consumer graball.'

At this uncertain time of questioning or trumpeting the RuleBritannia mythology, a good moment to revisit two novels about faded glory.

‘On the frontiers of the Austro-Hungarian Monarchy there were at that time many men of Kapturak’s sort.’ [He’s a cynical businessman.] ‘All around the old Empire they started to circle like those cowardly black birds that can see someone dying from an enormous distance…No one knows where they come from, or where they’re bound. They are the feathered brothers of Death, his heralds, his companions and his camp followers.’

Joseph Roth’s novel chronicles the slow decline of a great empire through the fortunes of three generations of the Trotta family, taking its title from the march composed by Johann Strauss Junior in 1848 to celebrate the Austrian army’s recent Pyrrhic victory over their insurgent Italian subjects in Piedmont which marked the beginning of the end of Austrian supremacy in the Italian peninsula. Roth described the march, which became an unofficial national anthem and a favourite of the army, known for their impractical white uniforms and Ruritanian incompetence, as ‘the Marseillaise of conservatism’. Here he explores the delusions and misprisions which underpin the clinging of a people to the mendacious fantasies of their questionable past glories.

The book opens on the battlefield at Solferino as a silvery noonday sun breaks through the grey-blue haze separating the opposed armies. The first Trotta, an infantry lieutenant from an obscure village in Serbia, heroically saves the life of the Emperor by stopping a sniper’s bullet with his own shoulder. He’s awarded the army’s highest military honour and ennobled to Baron, a title which makes him feel decidedly uncomfortable. He dissuades his son, who is more drawn to the social distinction the inherited title will confer, from joining the military, seeking to alert him to the vanity of mere rank. However, the second baron encourages his own son to join the cavalry and indulge in the snobbish high status with which that will invest him.

Defeat in WW1 reduces the great sprawl of royal and imperial Austro-Hungary to a by-water, a tawdry parish, the once brilliant capital Vienna a truncated relic of its grandiose past, poverty for most, a slump into Weltschmerz and apathy for the glitterati. Whereas in Berlin they say ‘situation serious but not desperate’ the insouciant Viennese say ‘desperate but not serious’.

Roth delivers a work of intense narrative power, a brilliant evocation of that era of transition between the lost, imagined glory, and the deflated pomp, a penetrating insight into the human condition, the ant negotiating a mogul field of molehills.

JG Farrell’s Troubles, set in Ireland, begins where Roth’s novel ends, in the fraught atmosphere of 1919, when the infamous Black and Tans joined the fight against the IRA in the Irish War of Independence. Asked about his choice of historical context, Farrell said: ‘the reason why I preferred to use the past is that, as a rule, people have already made up their minds what they think about the present. About the past they are more susceptible to clarity of vision’. Current trumpery purveyed in the ‘take back control’ clamour would suggest otherwise.

Major Archer, returned from the war, arrives at the Majestic Hotel on the coast of Wexford, in south-eastern Ireland, as a guest, hopeful of confirming engagement to a woman he met on leave. Her father, the elderly owner, Edward Spencer, is the last scion of an old Anglo-Irish landowning family, Unionist in politics and, like the building he occupies, ‘beginning to go to pieces’. For the hotel itself is dilapidated, an anachronism, a toppling bastion of colonial power. The Protestant Spencers are, necessarily, at odds with the Catholics of the village in which the hotel is situated, but, more significantly, represent a doomed outpost of British rule in an Ireland of increasingly strident calls for liberation. Locals throwing stones to smash the windows. The threat of impending violence swirls - the gathering menace of Sinn Féin - and, in the dying pages of this fine elegiac novel, the imperious edifice of the Majestic Hotel succumbs to fire: ‘…the ceiling of the writing room descended with an appalling crash, ridden to the floor by the grand piano from the sitting room above. For hours afterwards a white fog of plaster hung in the corridors through which the inhabitants of the Majestic flitted like ghosts, gasping feebly’. It’s as though the besotted dream of the heyday is rent in cackling mockery of the benighted souls who’ve clung to its thin pretence for so long, refusing to see through its tatters.