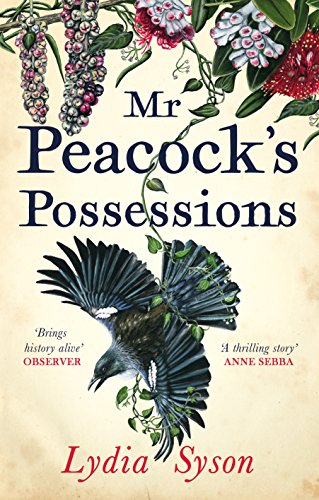 "Readers will find various parallels and echoes in this vividly realised, compelling novel."

Linda Newbery has written widely for young readers and is now working on her second novel for adults.
Lydia Syson has successfully published young adult novels with historical settings, and now looks set to reach a wider audience with this dazzling tale of colonisation and corruption, enterprise and abuse.

Set in Oceania in the late 19th century, Mr Peacock's Possessions centres around a growing family and the hardships they face on moving to an uninhabited island. "Where's the snake?" Joseph Peacock asks, on being offered this fruitful, unsullied land, apparently a new Eden. And there certainly are dangers. Soon after being landed there the family members face starvation when finding to their dismay that their supplies have rotted in the ship's hold; they must learn to survive on limpets and roots until they can grow their own crops. Utterly isolated, they don't see so much as a passing ship for months on end, and can summon help only through signal fires. They don't at first realise that the island is volcanic, and that subterranean rumblings produce sulphurous, deadly steam which almost kills two of the girls when they sleep in a cave near the crater. But the title hints that the deadliest "snake" is the one Mr Peacock brings with him, part of his own temperament. His son Albert, frail and suffering from what appears to be rheumatoid arthritis, bears the brunt of this, receiving constant taunts and criticism.

Events are shown to us through two viewpoints: that of Lizzie, Joseph Peacock's favourite second daughter, and - in first person - that of Kalala, one of six Pacific islanders, all young men, brought to the island to work at clearing and building. Kalala, whose older brother Solomona is a preacher, is shocked to realise that the Peacock children can't read, while he, observant and devout, reads his brother's Bible, anxious not to lose his skill. Through the highly perceptive and intuitive Kalala, and the vivid, frightening dreams of pain and despair he attributes to aitu, troubling spirits that haunt him despite his Christianity, we learn of a recent tragedy of neglect and abuse that's left bitter marks on the island. When Lizzie explains, "Pa can get cross, I ought to tell you ... He wants everything done just so. You do, of course, when a thing is your very own, don't you? You want it perfect," she prompts Kalala's recognition of "the force I saw at once in him, light and dark together." Lizzie's words are truer than she realises, especially of the difficult relationship between Joseph Peacock and the boy Albert in whom he finds only disappointment; she wonders why her father didn't look to her, instead of to Albert, as his heir and capable apprentice. When Kalala incurs Peacock's anger and fear, though acting through the best of intentions, events escalate with horrifying inevitability.

There are nods to Lord of the Flies in the island setting and the struggle for orderliness that fails to prevent the eruption of violence - Lord of the Flies as if written by Barbara Kingsolver, perhaps, with a dash of The Wicker Man. But I think readers will find various other parallels and echoes in this vividly realised, compelling novel.

As I write this, the longlist for the Women's Prize has just been released. I'll be disappointed if Lydia Syson's name doesn't appear there next year.