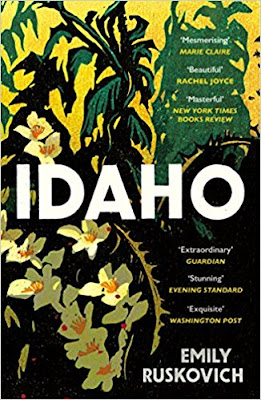 Anne Cassidy writes crime fiction for teenagers. She has published over forty novels for young adults. She writes dark crime fiction and is best known for Looking for JJ which was shortlisted for the Carnegie medal. Moth Girls was published by Hot Key in 2016 and concerns the disappearance of two twelve year old girls. Her new novel No Virgin describes the aftermath of a rape.

Idaho is a startling first novel which centres on a family tragedy. In it we are told the story of Wade and Jenny and their daughters June and May. The tragedy is the explosion at the heart of the story and the writer circles around it for the rest of the book. We begin to understand the events through the eyes of a number of characters mainly those of Ann, the second wife of Wade.

Ann has a pressing interest in the events of that day and it is her discoveries and interpretations that lead to the reader’s understanding of what happened and crucially why. And yet it is only a subjective solution for this is no classic crime novel. It is a story of a family in crisis, of a man who has a chance to live again, of a woman trying to understand the actions that brought it all about.

Mostly though this is the story of family life. Wade and Jenny, a young couple expecting a baby, have to live out a winter marooned in the snowy mountain. Two young sisters June and May play together until June is too old to play with dolls and May’s grief for the loss of her playmate is beautifully and painfully realised. Wade has early stage dementia just as his father had; though the loss of memory brings a kind of relief as he no longer knows what happened to his family.

The tragedy touches many people’s lives; William and Beth who comfort the husband afterwards; Tom Clark, who paints images of the missing daughter as she gets older year by year; Eliot, the boy who lost his leg falling through a dock. We also touch on the guilt of the perpetrator, the self-flagellation of a person who cannot accept any forgiveness.

The writing is assured and poetic and the characters are presented with a tender touch. There is no one in this book that the writer does not care about.

Idaho is published by Vintage.