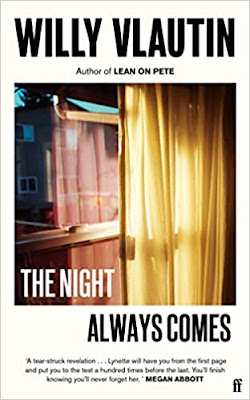 "Even as a writer in a similar genre I couldn’t predict how Vlautin would end this beautiful but excruciating tale. But when it comes, the ending is just perfect."

Doug Johnstone is the author of thirteen novels, most recently The Great Silence. His previous book, The Big Chill was longlisted for the Theakston Crime Novel of the Year. Several of his books have been bestsellers and three, A Dark Matter, Breakers and The Jump, were shortlisted for the McIlvanney Prize for Scottish Crime Novel of the Year. He’s taught creative writing and been writer in residence at various institutions over the last two decades including festivals, libraries, universities, schools, prisons and a funeral directors.

Doug is a Royal Literary Fund Consultant Fellow and works as a mentor and manuscript assessor for many organisations, including The Literary Consultancy, Scottish Book Trust and New Writing North. He’s been an arts journalist for over twenty years and has also written many short stories and screenplays. He is a songwriter and musician with six albums and three EPs released, and plays drums for the Fun Lovin’ Crime Writers, a band of crime writers. He’s also co-founder of the Scotland Writers Football Club.
Willy Vlautin is something of a hidden gem of American fiction. He is occasionally blessed (and maybe cursed) by that phrase ‘a writer’s writer’, but that might give the wrong impression of him as someone who is showy and flamboyant in his writing style. Nothing could be further from the truth – Vlautin’s novels contain the cleanest and clearest prose around, simple yet devastatingly effective. He brings to mind the words of Orwell, that good writing should be like a windowpane. It feels as if you can see straight through Willy’s words to the story, the characters and the pain he puts them through.

The Night Always Comes is Vlautin’s sixth novel. His previous outings have all been heartfelt examinations of the dark underbelly of the American dream – stories that look at the downtrodden and hard-done-by people at the bottom of that country’s society, and how they cope with the hardships that their situations throw at them. This latest book sees him finessing this formula masterfully, while also marrying it to a breathless thriller plot that feels like it owes a debt to the classic American noir canon.

The beating heart of the book is Lynette, a thirty-year-old with a troubled past, currently working three jobs, living with her mother and caring for her older brother who has learning difficulties. The book is set in Portland in the recent past, as the city is being rapidly gentrified, pricing people like Lynette out of the housing market and forcing them out of the city.

Lynette’s plans to scrape together enough cash to buy the house she rents are scuppered when her mother gets cold feet. Because of her dubious history, Lynette has no credit rating and needs her mother on board. She is left trying to claw back money that she’s owed from various less than savoury people, taking her on a long dark night of the soul as she travels across the changing city getting deeper and deeper into trouble.

The whole book takes place over two nights, as Lynette is forced to make hard decisions, then is forced to deal with the consequences of those decisions. One of her jobs is as a part-time sex-worker, and when she asks a rich returning client for a loan, his disgusted reaction forces her to take matters into her own hands for once. From there it’s a classic noir trajectory, as the momentum of her actions becomes impossible to resist.

From the opening few pages this is a heart-in-the-mouth read, both in terms of the action and the depth of empathy that Vlautin conjures up for Lynette. It’s impossible not to care about what happens to her even as she makes terrible mistakes, and even as a writer in a similar genre I couldn’t predict how Vlautin would end this beautiful but excruciating tale. But when it comes, the ending is just perfect.

The framing of Lynette’s story against the backdrop of rampant commercialism and consumerism in a modern American city allows Vlautin some social commentary, but it’s handled deftly and never polemical, always in service of his story.

This is a short novel, but one that takes structural and stylistic risks too. There are elements here that go against the standard creative writing lessons, things that shouldn’t work but just do because of Vlautin’s care and attention to the words on the page. There’s a large section of Lynette’s backstory inserted later on, not something I usually care for but it works brilliantly here. Then there is a lengthy discussion near the end between Lynette and her mother that by rights should bore the reader at a time when action is required, but which actually becomes a profound treatise on how we live our lives and relate to others.

As a writer, it can become harder to be blown away by others’ work when you can see the nuts and bolts of what they’re doing. But sometimes a book is just so good that you’re blown away. This is just such a book.

The Night Always Comes is published by Faber.
Doug Johnstone's  A Dark Matter was the choice of our birthday guest Val McDermid. Read her review here.