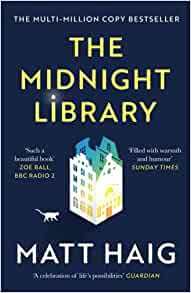 "I won’t do spoilers, just say I’m really glad I read this book, which is entertaining and wise."
Julia Jarman has written books for children of all ages. Her work includes The Time Travelling Cat series for readers of eight to twelve or thereabouts and the acclaimed picture book, Big Red Bath. She is currently trying her hand at writing for adults ‘to see if I can’.

Matt Haig has been sitting on my bookshelf for years – unread. How daft was I! Though highly recommended by a respected friend, The Humans did not appeal. Foolishly I let the blurb put me off, with a single word: aliens. The hint of sci-fi aroused my prejudices – I prefer realism or so I thought- and the book stayed closed. Then my reading-group chose The Midnight Library and I felt bound to give it a go despite the blurb which made it clear that suicidal Nora is ‘transported’ – yes, that sort of transported – at the stroke of midnight, to a fantasy library where she can choose an alternative life as easily as choosing a book. Her choice is limited to her own life. She can re-write it by going back in time to choices she made and choosing differently. Nora is attracted to this idea and so was I; it’s a fascinating theme.

Who hasn’t wasted time what-iffing? What if I’d married so-and-so? What if I’d gone to that job interview? What if I’d caught that train? Penelope Lively uses her ‘what ifs’ to good effect in Making It Up, a novel published in 2005. She uses her writing skills and imagination to create lives she might have lived in what she calls a confabulation or ‘anti-memoir’. True and not-true it reads like a novel-cum-biography. I enjoyed it very much. But would I enjoy The Midnight Library where the imaginative leaps are more daring?

Fortunately, the book begins realistically enough, with Nora nineteen years earlier, a worried teenager, in the school library during a wet break, talking to the comfortable, knowledgeable librarian Mrs Elm, who tells her prosaically enough that she has her whole life before her and could do anything she wanted. I liked and believed in both characters – even the excessively talented Nora - which was a good start. Mrs Elm turns up again later in the midnight library, which arises out of the mist, and that’s good news too, aiding credibility. Now Nora is thirty-five and she has already written her suicide note. She feels a complete failure and worse, she has no hope for a better future. She feels she will go on failing and is full of shame and regret for the opportunities she has not taken and the people she feels she has let down: her father for not becoming a champion swimmer; her brother and friend Ravi for leaving the pop group they’d formed; her lover Dan for jilting him two days before the wedding. The list goes on: Nora had more talents than most of us and a lot of people investing in her – and living through her.

But now Nora has a chance to explore those ‘might have been’ lives, and if she wants, choose one of them in preference to hers. Nora takes the chance and makes some remarkable discoveries. I won’t do spoilers, just say I’m really glad I read this book, which is entertaining and wise. I’ve now read The Humans which I also thoroughly enjoyed. Bring on the aliens!

The Midnight Library is published by Canongate.