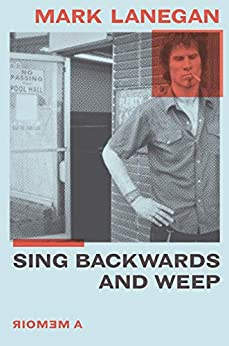 "One of the pleasures of the book is witnessing his passion for his unrealised talent as a singer-songwriter develop, despite his horrific addiction to drugs and alcohol..."

Keith Gray is best known for his novels for children and teenagers including Ostrich Boys, which was shortlisted for both the Carnegie Medal and the Costa Children’s Book Award and was successfully adapted for the stage. His latest book for teenagers is The Climbers, published by Barrington Stoke. Keith lives with his family in Vienna, Austria, where he co-founded the not-for-profit writer development community Sunday Writers’ Club. www.sundaywritersclub.com

Grunge and the 90’s Seattle music scene was part of the soundtrack of my youth. Albums by Pearl Jam, Stone Temple Pilots, Soundgarden and, of course, Nirvana were forever grinding their way through the headphones of my CD Walkman. I was never a particular fan of the Mark Lanegan fronted Screaming Trees, however. But looking back I don’t feel I missed out. Especially not now I’ve discovered Lanegan himself was embarrassed by the songs he sang and felt utter disdain for his bandmates.

One of the surprises of Lanegan’s autobiography is that music wasn’t a life-long passion. This is the singer who’s orbited grunge music before, during and after it was popular. He befriended and dealt drugs to many of its major stars, and nowadays is regarded as a cult figure, heavily influential and acclaimed as a great collaborator with other artists across several musical genres. Yet he starts his story by describing how he stumbled into Screaming Trees half-heartedly as a teenager in the 80s, without any real aptitude or ambition. He hoped being part of the band would be an escape from the ranching town of Ellensburg in Washington State where he hated growing up and where he’d already accrued a handful of petty criminal convictions. A hefty chunk of the word count here is dedicated to his dislike for his bandmates and their songs. But I guess you could say he learned on the job. One of the pleasures of the book is witnessing his passion for his unrealised talent as a singer-songwriter develop, despite his horrific addiction to drugs and alcohol.

Be aware, it’s one of the few ‘pleasures’ of reading Lanegan’s story. The book roughly encompasses the lifespan of Screaming Trees (1985-2000) who turn out to be also-rans within the grunge scene but whose biggest draw was Lanegan’s distinctive vocals. The details are in the performing, touring, incessant arguing and monstrous drug consumption.

The main interest for casual readers will be Lanegan’s friendship with Kurt Cobain but Cobain’s death and Lanegan’s proximity to it is neither the most revelatory nor poignant recollection. Lanegan’s 90’s were not just a car-crash but a pile-up of sex, drugs, drugs, DRUGS and rock ‘n’roll. So much so that the reader feels like a rubber-necker at many shocking anecdotes. Perhaps too many shocking anecdotes? I stopped feeling surprised by the lengths (or depths) Lanegan would go to to find his next fix about halfway into the book. I hung around hoping for more music. I wished there was more music. Although I was never a fan of Screaming Trees, Lanegan’s solo albums and his work with Queens of the Stone Age has been (to my ears) exceptional. But did he need to go through those years as a criminal, a cheat, a liar, a junkie to be able to create such incredible music? Is his songwriting so powerful because he’s been to those dark, dark places many of us can only imagine?

It’s a well written book of no-nonsense muscular sentences. There’s nothing shiny or pretty here. It’s bluntness helps keep much of the emotion or contemplation at arm’s length – which is a surprise if you’re familiar with Lanegan’s lyrical prowess. Yet maybe that’s the point: Lanegan wants to settle scores and tell truths, he’s not here to whine.

There are some lighter (or perhaps slightly less dark) moments. OnThe e of the most publicised is his encounter with Liam Gallagher of Oasis. But these are few and far between and Lanegan was around for the untimely deaths of his beloved friends Cobain, Layne Staley (Alice in Chains) and Kirsten Pfaff (Hole) among others. There is a note of epiphany and hope in the closing pages, dated around about 2002, but it’s still mind-blowing how Lanegan survived his personal addictions and continues to make great music today.

Lanegan’s been praised for his unflinching honesty and he portrays himself as a spiteful perfectionist bearing venomous grudges. He teeters precariously between powerful creativity, utter hopelessness and spiralling self-destruction. Often all within a single day. He either adores people or he loathes them – there’s no room for middle ground. And it’s a rock solid fact that the people he loathed won’t enjoy his book. Not that he’ll give a damn. He’s written his story exactly the way he wanted to.

The Dark Stuff by Nick Kent, reviewed by Paul Dowswell