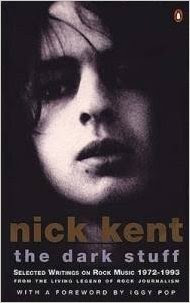 "Kent always wrote about the more damaged end of the rock star fraternity and had a gift for bringing their bizarre lives and characters vividly to life."

Paul Dowswell writes historical fiction and is a frequent visitor to schools, both home and abroad, where he talks about his books and takes creative writing classes. His novels Eleven Eleven and Sektion 20 won the Historical Association Young Quills Award and Auslander won the Hamelin Associazione Culturale Book Prize. Paul is a Fellow of the English Association and reviews books for Armadillo and Carousel.

When I was 16 my idea of good writing boiled down to The King James Bible, George Orwell and Nick Kent. The King James Bible gave me a love of flowing, musical prose, Orwell taught me about clarity, and Kent was a master of the gripping introduction and striking image.

Kent is now in his 60s, having survived over a decade of full-blown heroin addiction and a hair-raising early adult life as a journalist with the New Musical Express in its ’70s heyday. As fellow rock journalist Mark Ellen put it ‘If there was a story involving Keith Richards, naked groupies and a flaming carpet, Kent was the man to tell it.’

He had a style best described as baroque, his endless sentences flowing from one clause to another. He never learned to type and delivered his work in dense, spidery biro scrawl, sometimes on the inside of a dismantled cornflake box. Kent loved the sort of words and phrases you can relish and run around your tongue: ‘languishing’, ‘denizens’, ‘vortex’, ‘the Babylon sweepstakes’, ‘lounge lizards’, ‘burlesque nadir’… Robert Plant described him as ‘one of the real poets’ of rock journalism and that certainly chimes with me. Kent always wrote about the more damaged end of the rock star fraternity and had a gift for bringing their bizarre lives and characters vividly to life.

His book The Dark Stuff, an amended compilation of his best newspaper and magazine articles, was first published in 1994. It’s a master class of gripping titles: ‘Sid Vicious – the exploding dimwit’, ‘Twilight in Babylon – the Stones after the ’60s’, ‘The Bewildering Universe of Roky Erickson and his two-headed dog’, ‘Lightning up with the Prince of Darkness: Miles Davis approaches 60’, ‘Going to Hell with Jerry Lee Lewis’… Anyone with a love of rock music could not fail to be intrigued.

And the articles that follow rarely disappoint. Take that last one on Jerry Lee Lewis where Kent describes a 1989 encounter with this titan of ’50s Rock and Roll, brilliantly capturing his intimidating manner and the cadence of his Memphis accent. It begins ‘He was trying to be courteous, but you could tell almost at once that being courteous wasn’t really part of his basic nature.’ Kent describes him as radiating waves of random hostility, like static on the radio. ‘Even wearing a white ski jersey with gambolling reindeer knitted on the chest, he still looked like Murder Incorporated.’ Lewis is torn apart by his deep Christian beliefs and the ‘devil’s music’ he plays. Writing about the recordings he created in his prime, Kent says “… now more than ever it sounds like the mad abandon of a man throwing coals into the furnace of a runaway train that’s dragging him straight to hell.”

How could you read that and not want to listen again with a fresh ear to this extraordinary music?

Facing stiff competition (Stanley Booth’s ‘True Adventures of the Rolling Stones’, Robert Greenfield’s ‘STP A journey through America with the Rolling Stones’) Kent writes better than anyone about the Stones in their drug soaked prime: ‘… the music seemed to drip from their fingers like dark honey. It all seemed so effortless yet so all-consuming in its intensity. And Jagger knew all about this music, how to inhabit its sharp angles and bleak crevices, how to caress it with his voice and ride its terrible momentum…’ all of which explains why the Stones, even now much copied by musicians a third of their age, are still filling enormous venues in their 70s.

He always wrote with great sympathy for his subjects, apart from Sid Vicious, who famously attacked him with a bike chain. Here’s the introduction to a piece on the tragic, acid-inspired demise of Pink Floyd’s Syd Barrett: ‘First came the Floyd. Then came the void. And sometimes, in between this tragic passage, the omens were there for all to see… As anarchy came screaming through his psyche, so the sound it made overwhelmed his muse and its music.’


I even met him once, at a literature festival in France. They say never meet your heroes, but he was charming and perfectly happy to chat and sign my dog-eared copy of The Dark Stuff. It’s my bedside comfort read and I’ve never grown tired of it.