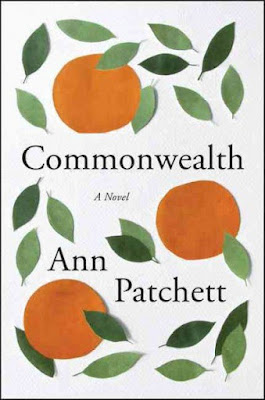 Jon Appleton worked in-house in publishing for 20 years and has been a buyer for a book club, reviewer and speaker on children's books and publishing. He is now a freelance editor and writer with a particular interest in helping new authors pitch and publish their work. His debut novel, Ready to Love, was released in Summer 2016, and he blogs regularly on writers and writing at https://jonappletonsbooks.com/.

It’s for her novels with exotic locations – Bel Canto (set in South America) and State of Wonder (along the Amazon) – that Ann Patchett is best-known for winning prestigious prizes. But everyone should read the books that are set in more familiar territory, her own United States, and you should start with her seventh novel, Commonwealth.

It’s the story of two families fused together as the result of a kiss at the christening of Franny Keating back in 1964. Marriages fracture and reform, but most significantly of all, a brood of six children coheres into a tribe and their feral bonds exist independently of (though of course also influenced by) their parents’ divorces and remarriages and inevitable ageing. For fifty years, until the present day.

Commonwealth is a big novel – there are a lot of characters, a lot of time is covered, and the title itself promises vastness. Just as Run (an earlier Patchett novel) is a beautiful word, so too is Commonwealth, which in America describes Virginia, one of the two key locations in the book, a designated ‘commonwealth’ state. Of course, it also conveys the common wealth of a family with its secrets, betrayals, punishments, tragedies and the rest, that burden and enlighten members in different ways. At the heart of the novel is the devastating death of a child, but that’s nearly eclipsed by a great betrayal, spurred by Franny and her relationship with a much older man, a writer called Leo Posen, who turns the family story into a bestselling novel – called Commonwealth – which forces all the children to confront the chronology and interpretation of their lives.

Although the canvas is large, it’s not an epic novel. Ann Patchett scoops chunks of time out of the narrative, and drops us back into stories at their end, or at the beginning of the next one. (It’s no surprise to learn she has a file of off-cuts – whole deleted scenes which she removed, with the proviso that she could reinstate them if required – which didn’t happen).  You need to backtrack at times and remember which sibling belongs to whom and where they’ve ended up and what they recall. But her touch is light and her movements skilful so we have complete faith in her ability to carry us through the years.

Patchett’s great skill is her ability to illuminate her subject from all sides with a kind of ‘admiration and disbelief’ as she writes in this novel. (Perhaps all her books could be called State of Wonder.) Here’s how Patchett describes Franny’s relationship, at 29, with the much older novelist:

‘After all this time he could not believe that she was with him: not only was she young (not just younger but categorically young) and more beautiful than he had any right to deserve at this point, but she was the cable on which he had pulled himself hand over hand back into his work: she was the electricity, the spark. Franny Keating was life. For her part, Franny could say the name Leon Posen, like she was saying Anton Chekhov, and find him there in the bed beside her. It did not cease to be astonishing with time. And more than that, he had found her life meaningful when she could make no sense of it at all.’ She goes on to tell us, ‘Which is not to say they were without problems …’

There are plenty of stories about novelists out there but what is most interesting about Commonwealth is that it really is, apparently, faithful to the story of Ann Patchett’s own parents’ divorces and remarriage. She wrote the book because she felt that until she’d addressed her own story she’d be unable to develop new fictional worlds. Patchett is Franny, who is as laconic and bitingly funny as Patchett appears when she writes in her own voice in works of non-fiction such as This Is the Story of a Happy Marriage (which, incidentally, contains ‘The Getaway Car’ which is the best account of a writer’s journey I’ve ever read).

Of all the books published in 2016 Commonwealth is the novel I was most looking forward to, and (with two months to go) I can safely say it’s my book of the year.
Posted by Linda Newbery at 16:16