Guest review by Berlie Doherty: A ROOM MADE OF LEAVES by Kate Grenville 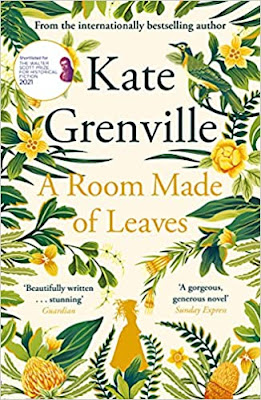 "Grenville is a terrific storyteller and has an unerring sense of descriptive language..."

Berlie Doherty writes novels, plays, stories and poetry for all ages, and is translated into over twenty languages. She has written over 60 books, including her best-selling Street Child and much-loved Blue John, several of which have been dramatised for radio, television and the stage. She has won many awards including the Carnegie Medal twice (Dear Nobody and Granny was a Buffer Girl, both of which were set in Sheffield). Her subjects cover many different genres, from folk and fairy tales, ghost stories and love stories, fantasy and historical fiction to enduring contemporary family novels. She lived in Sheffield for many years and now lives in Edale.

You can visit her website at www.berliedoherty.com
I only recently came across the Australian author Kate Grenville, through her wonderful book The Secret River, which must be one of the most powerful novels I’ve read in the last few years. Since then I’ve been catching up with her many other novels, and I was really pleased to know that she has recently published a new book, A Room Made of Leaves.

I was a little disconcerted at first when I understood from her preface that Kate Grenville hadn’t in fact written this book, but curated and edited it from an eighteenth century manuscript written by the wife of the infamous John Macarthur, a British soldier serving in a pioneer settlement in New South Wales. Kate Grenville read through the manuscript with some difficulty, as the handwriting was faded in parts and crosshatched to save paper. She says, I have not altered the manuscript in any way …

I was deluded for a short time.

In fact, the whole novel is about truth and deception, pretence and forbearance.

The focus of the novel is the relationship between the real life Elizabeth Macarthur and John Macarthur, known as the pioneer of the wool industry in Australia. He was by all accounts an unpleasant man who had the reputation of being quarrelsome to the point of being vindictive, and was highly ambitious.

As the novel begins, Elizabeth, the daughter of a Cornish clergyman, is clever, wilful, and sexually aware. A moment spent behind the hedge with a young John Macarthur shapes the rest of her life. She is pregnant, and is forced into the deceit of a loveless marriage from which there can be no escape. There is no more seduction, no more romantic love. Before the year is out the Macarthurs travel to Sydney. During the long, dreadful journey on the convict ship Elizabeth gives birth to her baby, who dies. On board the ship, her husband is arrogant, bullying, hateful and uncaring. All this is historically documented.

In a series of letters sent to her cousin and friends in England, the real Elizabeth related the course of the relationship, and the rise to power of her husband. In the novel, her letters are deceits, heavily disguising the emotional truth. Her husband disgusts her in every way, but because he reads her letters, she can only write the opposite.

The heroine is determined to make the most of her new life in the strange, hostile environment she has been brought to. The landscape is scrubby and harsh, with thick clumps of grass like sharp blades. Their crude dwelling is close to where the marines and convicts are placed:

There were times when the screams could be heard all over the settlement …. Hunger and desperation, anger and fear, loss and yearning for home, brought out all that was worst in everyone. It was a place of sniping and slander and barbed rumours ..

Later in the book Elizabeth has a secret sexual relationship with William Dawes, an astronomer and botanist who keeps himself apart from the marines and soldiers. His hideway is the room full of leaves, a place of calm and natural beauty, and here she finds relief from the sterility of her marriage and the loneliness of her situation. In her encounters with him she observes but never comes close to the First Nation women and children who are his frequent visitors.

A Room Full of Leaves is familiar territory to Grenville and her readers. We have visited the settlements before in The Secret River and The Lieutenant – and met some of the characters. Grenville is a terrific storyteller and has an unerring sense of descriptive language. Macarthur’s character is powerfully drawn; he is morally brutal, yet infantile. He has no understanding of his wife, yet she understands him completely. In her quiet way, she controls him.

However, I was disappointed. I didn’t have any real sense of the presence of the First Nations, mostly simply figures who stroll through the settlement and appear and disappear at will. In the same way, the convicts are merely there, as a backdrop, and even Mrs Brown, a convict maid who becomes a companion, tells us little about the unbearable situation that these settlers find themselves in. I also find it hard to believe in Elizabeth’s relationship with Dawes as a love relationship rather than as a sexual one.

Elizabeth herself is resilient and resourceful. In England at that time she could have graced the living-rooms of Jane Austen’s novels. But what does she do every day? What on earth must it be like to adjust to the demands of daily life in that alien landscape? She survives, she’s strong, she makes the most of her life and the farm that she has created. She loves it, in the end. But I don’t feel I know her. The novel has left me in awe of a superb writer, but still hungry.


You can read my review of Hilary McKay’s The Skylarks’ War and Lilo Beil’s Shadow Time Stories in my blog https://berliedoherty.com/category/blog/

A Room Made of Leaves is published by Canongate.
It also features in a recent independent bookseller round-up, Her Story not His Story, by Madeleine Smith of P G Wells in Winchester.