Guest review by Graeme Fife: HOUSE OF GLASS - the Story and Secrets of a Twentieth-Century Jewish Family, by Hadley Freeman 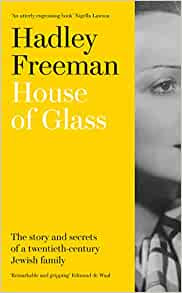 "Staying alive is the great challenge but a challenge with untold emotional consequences, nor does it always end well ..."

Graeme Fife has written many plays, stories, features and talks for radio, stage plays and articles for newspapers and magazines, and is now a regular contributor to BBC Radio 4's From Our Own Correspondent. He's the author of a string of books - children's stories, biography and works of history. Great Cycling Climbs, which brings together his books on the French Alps, is published by Thames and Hudson.
He says, 'I urge everyone to buy from their independent bookshop, if they're lucky enough - as I am - to have one nearby. If not, by any means possible to counter the sprawl of the online consumer graball.'
When Hadley Freeman visited the apartment in Miami where her paternal grandmother, Sara, had died twelve years before, she was 28. Knowing that Sara had had a lifelong interest in fashion, Freeman, a staff fashion writer at the Guardian, thought there might be material for an article.

Then, at the back of one closet, under the gowns, a red shoebox. Another pair of ‘slightly battered kitten-heels sandals’? No. It was stuffed with photographs – family members known to her, others unknown – letters, memorabilia of her grandmother and three brothers…a scrappy piece of paper on which a pencil drawing, signed Avec amitié, Picasso…

Suddenly an article about fashion was blown away. Now she confronted a much bigger story: Jewish refugee from a Polish shtetl, fleeing hunt-and-kill-the-Jew pogroms after the First World War, settled in Paris, older brother a couturier, further exile in USA and marriage to a man she didn’t love, clinging to the sophistication of Paris, memory of an elegant woman who had seemed rather adrift…

Thus began some fifteen years of research for a memoir in which she had no confidence that it would be published, even read. She constantly asked herself: ‘Why should anyone be interested in my grandmother’s story when there are so many other stories out there?’

By her own admission, so much of the background she had to explore as the context for her grandmother’s story was unfamiliar. She, a Jew born in Manhattan, even had to Google Kristallnacht, one of the most notorious events in Nazi persecution of her people. I say her people because it very soon became apparent that a memoir centred on the life and experience of her grandmother, thence her parents, three brothers, cousins, also in Paris, must draw in an account of what happened to other Jews living in Nazi-occupied Europe. Suddenly, the wider remit seemed unutterably daunting. How to garner all this? Her answer to anyone seeking advice in such a predicament – from her own methods, at first stumbling, gradually more assured – is: ‘seek help’. Professional friends assisted and encouraged, put her in touch with others who filled in gaps and indicated other avenues to pursue.

Having been very self-conscious about her lack of expertise, Freeman has shown herself to be an investigator of rare tenacity, acute instinct, intelligence and insight. She remains dismissive of this, but needlessly, for she has written a book meticulously researched and wonderfully light in touch. The closely observed detail never swamps the story.

For a long time she struggled with structure – so many elements to draw together, how to marshall them? Overcoming that difficulty, hard as it proved, results in a format which seems obvious, natural: four people, four temperaments, four pivotal events or circumstances affecting their fate. Moreover, from the individual narratives radiates the compelling, wider story of countless others caught up in the same horrors and moral perplexes.

At a time when denunciation, immanent danger, treachery are commonplace, misleading someone need not always be malicious; it may be the only means of by-passing naivety, ensuring safety. So, in one instance, here. It comes down to survival. Staying alive is the great challenge but a challenge with untold emotional consequences, nor does it always end well. Sara was unhappy, in a sorrow perpetuated by a deeper grief; nevertheless, her survival meant that Freeman herself could be born. Such realisation – of the sacrifices which lead to new life and vigour – doesn’t come without a toll and Freeman describes addressing certain chapters of the story as very painful, like ‘pushing at the bruise’. (The great French journalist, Albert Londres, described the journalist’s role as ‘sticking the pen nib in the wound’.)

This book is a triumph of balanced narrative, of emotional honesty, of integrity. When certain journalists and some in high office flex to their own vanity and lie and misconstruct for their own devious purposes, Freeman is honourable. She eschewed one story at request and gave members of her family power of deletion. Her father did delete…two identical adverbs.

Reconstructing a story to which you were neither eye nor ear witness risks charges of fabrication – of what was said, done, thought. Unless a writer evaluates what witnesses say impartially, sympathetically, perspective is limited. A memoir’s validity ultimately rests on the openness and self-effacement of the memoirist and this memoir rings true. I also applaud the plain-spoken, unsentimental, brisk prose style. It’s a wonderfully readable book, the characters are well-drawn, real, vital. The background sweep of historical context has a diaphanous clarity. This is a book for our time and for a whole people.
House of Glass is published by Fourth Estate
Graeme is a regular reviewer here. See more of his choices:

The Shapeless Unease by Samantha Harvey
West of Sunset by Stewart O'Nan
Bright Day by J B Priestley
What a Carve Up! by Jonathan Coe
Sunset Song by Lewis Grassic Gibbon