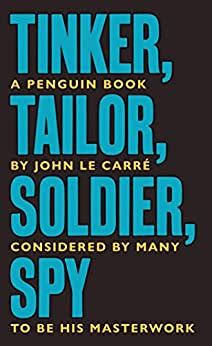 "The more I read this novel, the more I have appreciated its artistry."

Jane Thynne is the author of the Clara Vine novels, a spy series featuring an Anglo-German actress in Nazi Germany. She has also written The Words I Never Wrote, and other standalones. Her latest novel is Widowland (Quercus, June 10th). It is an alternative history dystopia set in 1953 - coronation year, but not the coronation of Queen Elizabeth. An Alliance between Germany and Britain had produced a society based on caste, where women are divided into a rigorous hierarchy. The heroine, Rose Ransom, is tasked with editing the classic texts of English literature to eliminate any portrayals of women as independent, powerful, subversive.

Widowland is written under the pen-name C.J Carey.

Jane has worked as a journalist at the BBC and on a number of Fleet Street newspapers.

I came to John le Carré very late, but having discovered his masterpiece I will never tire of it. Anyone who writes about closed societies and inner sanctums will recognise his insight into how power works. His dialogue perfectly captures class and attitude, and his slang is stunningly inventive - ‘scalphunters’, ‘moles’ and ‘babysitters’ were all his coinings. In every way, he is a writer perfectly matched to his subject; the profound machinery of his labyrinthine plots mirrors precisely the deep machinations of his spies.

The more I read this novel, the more I have appreciated its artistry. Take, for example, the use of the school subplot, which subtly adumbrates the action of the entire novel. The novel opens obliquely, in a minor boarding school, Thursgoods – an environment that le Carré, as a former teacher, knew well, and which like the Intelligence services and Whitehall, is an intensely male setting, filled with jargon and unwritten rules. Jim Prideaux, an MI6 agent hiding out as a supply teacher, has been hired, and we see his arrival through the eyes of Bill Roache, a lonely new boy. Roache is ‘a natural watcher’ – an embryonic spy, whose name will be echoed later in the form of Bill Haydon, the charismatic villain of the narrative. In an apparently random episode, Jim’s lesson is disrupted by an owl smoked out from the chimney, which Jim kills expertly and is discovered ‘still folded, neatly dead’.

Here we have, foreshadowed, elements of the plot – of the watcher Bill Haydon, who will be neatly executed by Jim Prideaux. And the strange inclusion of an owl is no co-incidence. Later in the story we encounter a Russian spy called ‘Lapin, the rabbit’. And the entire story revolves around the discovery of the ‘Mole’. Owl, Rabbit, Mole. What is le Carré suggesting in his use of these classic figures from children’s literature? That the child is father to the man? Or that the multi-layered plot can be peeled and peeled, right back to youth, and the juvenile friendship of Bill Haydon and Jim Prideaux.

Aside from plotting, le Carré’s genius lies in his ability to characterise with a few deft strokes, often merely the use of slang that is never explained and so draws the reader in as intimates of his secret world.

His women barely exist, of course. But I love the melancholy watchfulness of Smiley, and the silky smoothness of Bill Haydon, who was modelled on Kim Philby. Yet it is le Carré's dingy, post-Imperial Britain that is his greatest creation. His themes of love and betrayal are played out in an England that is shabby and rainswept. Stunningly rendered, with the bitter lyricism of a betrayed lover, he captures perfectly the atmosphere of dashed expectations and second rate-ness in a country which had been trained to rule the world.
Tinker, Tailor, Soldier, Spy is published by Penguin.