"So all in all I have decided not to go to see the new film of Emma, delightful though it may be. It would, I’m afraid, trample on my dreams."

I was quite looking forward to the new film of Jane Austen’s Emma (yes, there are other Emmas: Charlotte Bronte’s, for one).

Emma is probably the finest book I’ve read. I wouldn’t quite recommend it as a comfort read, but it’s a great book for clearing the mind of the detritus of modern life.

There’s no one like Jane Austen for resetting the moral compass.

So, anyway, I was quite looking forward to the film of Emma. But then I came across an interview with Eleanor Catton, admitting that when she accepted the commission to write the screenplay she hadn’t read the book.

Now, I’ve probably read Emma a dozen times, and I’m still discovering stuff: not just the odd joke, but really important things like, for instance, the solution to the problem of Mrs Elton. Mrs Elton, for those who have not yet had the irritation of knowing her, is one of those people who Knows Best. In this, it has to be said, she rather resembles Emma herself, and the difference between the manifestations of their pride, condescension and motives is a complex and interesting one. Anyway, Mrs Elton irritates the hell out of more or less everyone, causes a lot of grief with her meddling, and then gets off scot free … or so I thought the first seven times I read the story. But Austen actually condemns Mrs Elton to a terrible (though much-deserved) fate; and the fact that this fate won’t strike her until long after the book ends just goes to illustrate what a work of consummate genius Emma is.

Still, Eleanor Catton is a much-lauded writer, and perhaps she managed to spot all the vital subtleties first time.

But then I read an interview with the costume designer, full of joy at the sumptuousness of the costumes Emma and her friends would have worn; and then there was another interview (I think with the director) explaining that nowadays Emma would be spending her life on Instagram showing off the latest fashions. Now, in the book even the most critical of Emma’s acquaintances believes her to be not personally vain, and the general community of Highbury (and Emma is a book set very firmly in its community) is nearly all of it slightly hard-up and full of cheerful stratagems for remaining respectable. Even the cake at the wedding which opens the novel is shared around the town. As for the wedding at the end of the book, that, too, is distinguished by its lack of show:

The wedding was much like other weddings, where the parties have no taste for finery or parade; and Mrs Elton … thought it all extremely shabby, and very inferior to her own. – “Very little white satin, very few lace veils; a most pitiful business! Selina would stare when she heard of it.”

So all in all I have decided not to go to see the new film of Emma, delightful though it may be. It would, I’m afraid, trample on my dreams.

And what is so completely dreamy about Emma?

For a start, it is very funny indeed.

It’s full of interesting and believable characters, with some of whom you’ll fall in love.

The plot is mind-boggling and has been called the first detective story (though it is a detective story where the identity of the detective is itself for a large part of the book a mystery).

It employs (and quite possibly invents) two revolutionary literary devices, stream-of-consciousness and free indirect style, and it has great fun with them, while never forgetting that it is bad manners to baffle or alienate the reader.

It has a really proper ending.

Oh, and it is quite possibly the finest novel ever written. The name Austen is a version of Augustine, which means great or magnificent. Fair enough, I’d say.

And the solution to the problem of Mrs Elton?

Well, it took me about seven readings to notice it, but you might get it first time.

It’s well worth the trouble. 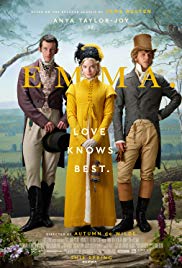 Have you seen the new film adaptation? What did you think? Please tell us in the comments!

LONGBOURN by Jo Baker
Posted by Linda Newbery at 00:00