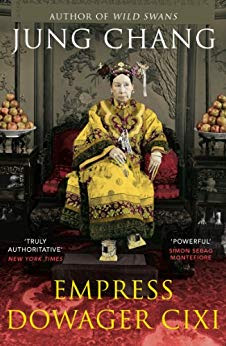 "...what an accessible writer Chang is ... scrupulous in her research but brings the story alive by her vibrant style."

First published in 2001 for children, Cindy Jefferies found success with her Fame School series with Usborne Books, obtaining 22 foreign rights deals. Latterly writing fiction for adults as Cynthia Jefferies, her first title The Outrageous Fortune of Abel Morgan was published in November 2018. Her second title The Honourable Life of Thomas Chayne came out in November 2019 and is set during the English Civil Wars.

At the end of Jung Chang’s biography of the Empress Cixi, Chang says “looking back over the many horrific decades after Cixi’s demise, one cannot but admire this amazing stateswoman, flawed though she was.”

In modern China Cixi is not admired but Chang has done much painstaking research and has a different story to tell. Cixi was born in 1835. At 16 she was chosen to be a concubine of the Emperor Xianfeng, who was 19. Cixi had caught the young emperor’s eye and was one of several accepted. She was very ambitious, interested in politics and highly intelligent but the life she undertook was not for the faint-hearted and she was not chosen to be the Empress, but was ranked on the sixth of eight rungs for concubines.

Enclosed in the harem she became friends with the girl chosen to be empress. Having lost the Opium war against the British, the country was now obliged to accept imports of damaging opium, made in India and a valuable export for the British although it was banned in the UK. There was also the largest peasant rebellion in Chinese history, due to terrible famine. Cixi had opinions about all this, but voicing them could have led to her execution.

The emperor was frail and it was of great moment when Cixi gave birth to his first son. She was elevated to just below Empress Zhen in rank. When the Emperor died in 1861 his only son was five and the country was in a terrible situation. The Emperor had a closed door policy, but Cixi could see that this was making China weaker. Extraordinarily, with Empress Zhen supporting her she overthrew the regents in a bloodless coup and as Empress Dowager, she became the ruler of China, sitting behind the yellow silk screen behind the throne.

The story of the rule of Cixi must place her as one of the greatest female rulers in history. During her long life she steered this vast country from a medieval state to a modern one, introducing the telegraph, trains, modern education and governance and a more humane legal system. She fought wars, revolt, betrayal and made some mistakes. But she loved her country and believed in its people. European nations and Japan took brutal advantage while China slowly embraced the 19thC. Britain has little to be proud of at this time, with a few individual exceptions.

Anyone who has read Wild Swans will know what an accessible writer Chang is. She is scrupulous in her research but brings the story alive by her vibrant style. Just shy of 500 pages, I found the book almost unputdownable. China today is a superpower, and it seems the present ruler Xi is determined to be as absolute as Cixi, and to rule for life. But where Cixi wished her nation to become a democracy, Xi shows no sign of giving his people similar freedoms. I found myself wondering what the Empress Dowager would think if she could see her country now.