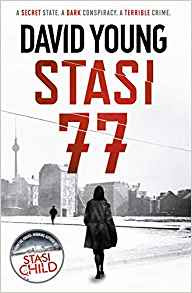 "... the constant fear of being observed, followed or overheard runs like a strong thread throughout ..."

Ian Beck is the author and illustrator of many books for children. He has also illustrated books by Adele Geras, Rose Impey, Geraldine MaCaughrean and Philip Pullman. He has published several novels for young people including the Tom Trueheart series, Pastworld, The Haunting of Charity Delafield, and The Carmody Casebooks. He recently revisited his iconic illustration to the cover of Elton John’s 1973 album Goodbye Yellow Brick Road reimaging it for the cover of Elton’s final world tour programme. His most recent picture book is The Magic Hour published by Tate Gallery in March of this year.

It is 1977 in the Deutsche Demokratische Republik of East Germany. The anti-fascist protection barrier (to give the Berlin wall its official title) will still be standing for another 12 years. Major Karin Muller of the Kriminalpolizei has been recalled from holiday to investigate the suspicious death of a party official. As with the three previous books in the series (Stasi Child, Stasi Wolf and A Darker State) her enquiries are never straightforward. There are always deeply hidden crosscurrents and darker motives. The shadowy hands of the Stasi, the state secret police, are close  behind her at almost every turn.


Karin has an odd kind of relationship with her country and its politics. Frequently frustrated at her attempts to get to the truth and yet, in passing, admiring the architecture of their brave ‘new world’, feeling at one point in the centre of a new development that ‘Marx himself would be proud of what they had achieved’. However, she can still deplore the qualities of the official ersatz coffee, Kaffe Mix. It comes as a delightful, almost ecstatic shock when in one scene she ís covertly served a cup made from real coffee imported from the West.

The party official has been found suffocated by smoke inhalation. What at first might have been seen and dismissed as an accident is soon revealed to be murder. A similar killing of another party official is reported, and further murders using the same modus operandi. Karin sets off with her assistant, Hauptmann Werner Tilsner (with whom she has shared the odd dalliance in the past) who says, ‘I’d much rather be getting dirty hands than shuffling paper and pushing pens.’ However an interview with the widow of one of the murdered men is made difficult through the presence of a Stasi official who censors certain questions and forbids particular lines of enquiry. It seems that the Stasi are taking a very keen interest in what appears at first to be a routine case. Even those officials and colleagues who she has been able to trust in the past now seem at times to be untrustworthy, even perhaps capable of physically doctoring evidence. Who can Karin Muller trust? In the end, perhaps, only herself.

The narrative is interrupted at certain points with the testimony of a French prisoner in WW2. A fisherman from the Isle de Re, he was in the resistance with his two siblings, ‘a band of brothers’. They have been caught and shipped to Germany as slave labourers, known as Zebras, for their striped uniforms. They work in terrible conditions tunnelling for the secret V1 and V2 rocket bases, flogged and starved and treated as barely human by the Kapos in charge of them. The horror of their story, each time it appears, provides a vivid and continually worsening counterpoint to the main thrust of the investigation. Karin seems especially vulnerable this time round. Her twins, aged seventeen months and mostly looked after by her grandmother Helga, are a sensitive pressure point, a possible bargaining chip for any officials out to thwart her investigation if it gets too near the truth. The narrative constantly circles the very dark secrets of Germany’s past in WW2. Karin is from the generation born too late to be held responsible for what happened in the war: as one of the characters says to her at one point, ‘You are too young to bear the guilt’. Later in the narrative a series of immediate post-war debriefing interviews between a major in the American forces and a member of the Nazi party are transcribed, throwing more light on the darkness at the heart of the book and its shocking conclusion.

David Young writes with admirable clarity and atmosphere. The day to day details of East German life, the suspicions and petty inconveniences, the constant fear of being observed, followed or overheard runs like a strong thread throughout. Interviews might be conducted at an especially unpopular bench at the Zoo. Older buildings and their history are evoked: ‘Like many of the Republic’s older structures, bullet hole damage from the Second World War was still evident in its brickwork’....indeed that damage is not only physical but runs deep into the structure of the state itself. This gripping and satisfying read is a worthy conclusion to the Karin Muller series. It is also fascinating to read of the true deeply moving and shocking events behind the story in the author’s note at the end of the book.

Stasi 77 is published by Bonnier.
Posted by Linda Newbery at 00:00