Guest review by Simon Edge: SQUEEZE ME by Carl Hiaasen 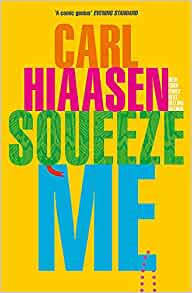 "In normal circumstances the whole thing would be cartoonishly implausible, but the tragedy of our times is that it’s never been more believable." 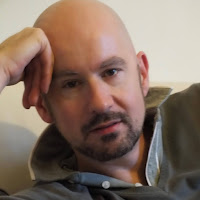 Simon Edge is the author of four novels. His fifth, The End of the World is Flat, is out from Lightning Books in August

Were it not for the farcical Florida recount in the 2000 Presidential election, I might never have begun my love affair with the novels of Carl Hiaasen.

Back then, an election that hung on whether voters had successfully punched out all the cardboard from a perforated ballot, or left some of it still dangling, was the most absurd that US politics had ever got. I remember Hiaasen, interviewed on Radio 4, explaining that this might seem weird to the rest of the world, but it was normal for the nuthouse that was the Sunshine State.

He was the Miami Herald journalist who reinvented himself writing angry comedy thrillers about Florida, channelling his fury at the destruction of the Everglades into satirical tales of venality and corruption. As a rule, the crooks’ greed is only surpassed by their rampaging imbecility, and a Hiaasen hero – usually some kind of crime-busting Crocodile Dundee – is on hand to ensure the villains get a horrific comeuppance, often with the help of some of the fiercer creatures from Florida’s vanishing wilderness.

After I heard him on the radio I started binge-reading Hiaasen, and he’s an influence on some of my own dafter plots. But it’s been a while, so it was a joy to complete a personal full circle in the wake of another presidential election with a strong Florida angle.

Squeeze Me opens at a fundraising ball on the billionaire island enclave of Palm Beach, where a rich Republican widow – and fawning devotee of her near neighbour, the 45th President – goes missing. When her body turns up buried in concrete, a blameless Honduran immigrant called Diego Beltrán is arrested. The President – referred to throughout the novel by his secret-service codename the Mastodon – whips up his supporters by turning ‘No More Diegos’ into a racist campaign slogan.

The Crocodile Dundee here is a tough-but-hot ex-con wildlife handler called Angie Armstrong. Teaming up with an honest local cop and an agent on the Mastodon’s detail, she establishes that no human killed the widow. Unfortunately that won’t help Diego, whom the President and his chanting supporters require to be guilty. Angie is determined to get him released.

There’s also the ongoing problem of an infestation of man-eating Burmese pythons – the titular squeezers – in the Palm Beach area. The one-eyed eco-warrior ‘Skink’, an old Hiaasen favourite, may or may not have a hand in it.

All the maestro’s usual ingredients are here: merciless satire on ignorant, filthy-rich incomers to Florida; a parade of inept crooks and hoodlums offing each other through bovine incompetence; heroic champions of decency and justice with more sympathy for the animal and reptile population than the ever-swelling human one; and a gloriously chaotic climax in which greed, vanity and preening arrogance get their just deserts.

The added zing here comes with the Trump connection. The President and First Lady are not just an off-stage presence but central characters: he with monstrously rolling gut, a daily regime of laxatives and a dependence on erectile treatments; she with granite indifference to everything but her hunky secret-service lover.

A good deal of the plot takes place in Casa Bellicosa, a thinly disguised Mar-a-Lago, which is the scene of an unforgettable set-piece showdown featuring super-sized pythons tripping on acid and a malfunctioning tanning bed. It’s Hiaasen at his absurd, grotesque best.

In normal circumstances the whole thing would be cartoonishly implausible, but the tragedy of our times is that it’s never been more believable. If we’ve learned nothing else from the past few years, we can at least all agree that the best satire is documentary.

On that score, Hiaasen and Trump are a match made in heaven.


Squeeze Me is published by Sphere