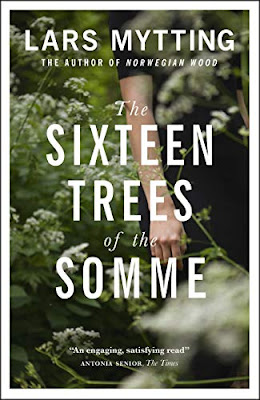 "Don't rush it - you could miss the vital hints which help solve the mystery."

I am Aloÿse Packe and I have worked for the independent Borzoi Bookshop in Stow-on-the-Wold for the past 29 years. The shop has been in the town since the late 1970s. During this time there have been three owners and twice as many shop dogs. There have been too many changes to go through here but some of our customers are still the same and they certainly appreciate our quirky individualism. We have just moved premises within Stow, so please don’t think we have closed - we have just moved. We are the official bookshop for the Chipping Campden Literature Festival held in May; we hold regular book signing events, and we run a successful book club for Daylesford Organic. We love to chat to our customers about books, as Linda will testify, so please drop in.

I chose The Sixteen Trees of the Somme because it has tremendous all-round appeal. I have read it twice. Usually I find this an annoying thing to do but I enjoyed it just as much the second time round. In fact I found so much more in the detail.

Lars Mytting, the author, is better known in the UK for his best selling non-fiction book Norwegian Wood: Chopping, Stacking and Drying Wood the Scandinavian Way. Wood plays an enormous part in this atmospheric family saga spanning the twentieth century.

Edvard is brought up by his grandfather on a remote farm in Norway. Following his grandfather’s death in 1991 Edvard decides to delve into the mystery of the death of his parents in France where, as a small boy, Edvard went missing for four days. Intertwined with this is the story of Einar, Edvard’s great uncle, a skilled cabinet-maker who was estranged from his family. The story moves to Shetland where Edvard meets Gwen Winterfinch, a young aristocratic Scottish girl, whose own family story is entangled with Edvard’s. Together, they travel to France hoping to find the truth about a missing inheritance. The chapters set in France are poignant and deeply moving. It is appropriate that the paperback edition was released in October 2018 as we remembered the end of hostilities in 1918.

Through the descriptive passages on wood we discover the link between the main characters. Trees have deep roots. The idea of a family tree is deeply symbolic.

To begin with the book moves slowly but take heed – every little piece of information fits into the jigsaw puzzle (rather like stacking wood). Don’t rush it – you could miss the vital hints which help solve the mystery. Ponder on the love story – attractive, wild, girl versus the sensible committed girl next door. This book may not stand the test of time but it is a really good read.

The Sixteen Trees of the Somme is published by MacLehose Press.