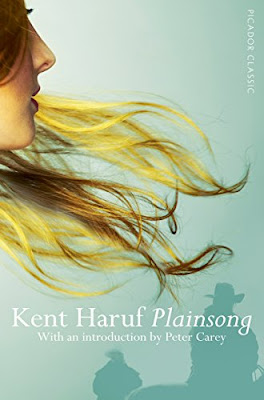 "A multi-layered, timeless story, taken at a measured pace that allows the reader to settle in and get involved..."

In the small mid-West community of Holt, Colorado, Tom struggles to care for his two young sons, Ike and Bobby, when his wife’s depressive illness leads her to abandon them. Victoria, seventeen and pregnant, is thrown onto the street by her abusive mother. Elderly brothers Raymond and Harold live a quiet life with only each other for company and little experience of the world away from their farm. Maggie, a divorcee living with her father, will be the catalyst for the connection of these unfolding stories.

The tale is set in a time that feels old-fashioned modern but is never explicitly referenced. This subtly reinforces one of the main themes: the mysterious nature of the human connections that bind us all across time and distance. Haruf crafts a multi-layered, timeless story, taken at a measured pace that allows the reader to settle in and get involved; it’s almost like catching up with friends over afternoon tea. The number of central characters and the switch between four different viewpoints is unusual and may irritate some. But for me, it worked and seemed to underscore the seasonal, rhythmic pattern of a rural life. The characters came off the page immediately: distinctive, individual and real, they pulled me into their lives. Even the more minor characters have depth and leave an impression after they have gone.

There is plenty of light and shade in the narrative. Raymond and Harold agree to take in Victoria but the three of them seem to have no common ground and the set-up is precarious. Ike and Bobby are left to roam free; while their adventures and perspective brings warmth and humour, their childish naivety and lack of supervision leads them into real danger. Tom, a teacher, faces up to a bully but finds himself, his job and his family threatened.

My heart was in my mouth at times, worrying about what would happen to these fragile, lovable people. But it is hope and not despair that suffuses the book. I found it haunting, joyous and suspenseful in turn. It is a proper human story, told without flashy literary devices or controversy; the whole construction is delicate, yet masterful. Plainsong is one of the few books of the last decade that will stay with me, and which already I want to read again.

Plainsong is published by Picador.
Posted by Linda Newbery at 00:00