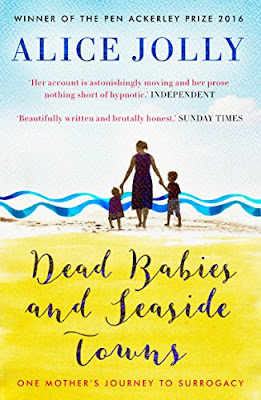 Cindy Jefferies has been writing for for various publishers since 2001, with her Fame School titles being continually in print for over ten years, and translated into 16 languages. In 2016 she was invited to be artistic director of the children’s part of the inaugural Stroud Book Festival in Gloucestershire. Out of that came the idea for a children’s festival, of which she is joint co-ordinator with Rick Vick. She lives in Stroud, and splits her time between writing, festival work, refugee aid and looking after her young granddaughter. She is a member of the Society of Authors and the Scattered Authors' Society. Apart from enjoying a glass of wine with friends she likes parking her mini camper van on the land she owns with her sisters, having a brew-up and enjoying the wildlife.

Profoundly moving, this memoir begins with a traumatic pregnancy and tragic stillbirth. But as Alice Jolly tells us, she has never had much time for the me, me, me, of memoir. This award-winning book, published by Unbound and winner of both the V S Pritchett Award and the PEN Ackerley Award, is many things. It manages to be uplifting and controversial, occasionally funny as well as tragic, and asks at least as many questions as it gives answers.

What is it that drives us on, as human beings? That is the question that remained in my mind when I finished the book. The simple answer is the desire to succeed, but when does that become unreasonable, or foolish? When is it admirable, understandable? Alice Jolly retreated to one seaside town or another, places she describes as the “ultimate act of defiance,” to recuperate between miscarriages. At one point she likens herself and her husband to gamblers. “We have become like gamblers who have lost so much that only a win can save them. Good money after bad.” She tries hard to come to terms with the situation. Unlike so many, they already have one healthy child. Surely they should be happy with that? Perhaps only those who have suffered the loss of a stillborn child will understand, or maybe no one can ever really, at the deepest level, understand what drives another.


At its simplest, this book is about a woman who refuses to accept that her family is complete. But it is also about money. With money, so much more is possible. IVF, donor eggs, adoption, surrogacy. Do these possibilities ameliorate the situation, or make it worse? Other questions arise. Morality, the law, mental health, the impact on others. This is a personal story, but it is also more than that, and I think, an important book. It is, too, beautifully written, honest, and without self pity. I shied away from reading it for a long time because I thought I would find it too emotionally difficult. When I found the courage, my fear was totally unfounded. Not only did the language draw me in, it is also just so darned interesting.

Jolly’s ability to write about tragedy without making it tragic is extraordinary. By managing somehow to stand a little outside her experience she shields the reader, without compromising the truth. This is, perhaps, the writer’s detachment Leonard Woolf describes so well in his autobiography, World Within World. However arrived at, the treatment serves this book exceptionally well. There are thoughts, too about how to process difficulties, and the role of emotional authenticity. Nowadays, “Everybody has to be allowed to feel what they feel, express, process…..But now I begin to realise that there may be events too big to process. Sometimes the only way to survive is to get up and walk on without looking back.”

Alice Jolly surrounds her story with place and time, with just enough detail to make us feel the seasons and years as they pass. Brussels, London and Stroud are all places that have been called home, while the coast is not somewhere to live, but a place to retreat to from time to time. And there is the beautiful house up high in the Cotswolds: a house so draughty that the heating is pointless. The house takes time and energy and emotion while it is renovated, but at last it is beautifully restored, and contains a family that eventually, touchingly, feels complete.

Dead Babies and Seaside Towns is published by Unbound.