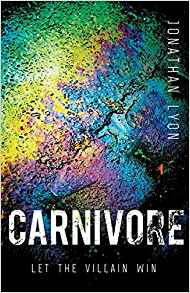 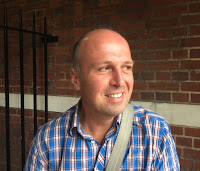 Jon Appleton is a freelance writer and editor, having spent 20 years in-house in publishing. He works with writers through the Writers Workshop, the Arvon foundation and as private clients. For commercial publishers he specialises in books for early readers and crime and thrillers for adults. In 2016, he self-published his debut novel, Ready to Love, which is currently in production as an audio book. Follow him on twitter @appletonsbooks


Just over halfway through Jonathan Lyon’s debut novel, there’s a passage that’s both visceral and heartbreaking but to share it almost screams ‘spoiler alert!’ But since this dazzling novel will have played with your expectations of what it’s about long before you reach this point, I think it’s a permissible tiny spoiler, so I’ll share a little text here:

"I’m not invulnerable, I’m not some supervillain beyond conscience who toys with wills for sport. I’m lonely. I’m still a boy, Francis. I’m a – a boy with a wasting body. I’m not a carnivore – or, I am but it’s because I was made one – a carnivore of circumstance – anaemic, fiending and predatory, but without a predator’s power to choose."

There you have it – the carnivore of the title is Leander, our narrator, a man in his twenties who has long endured chronic fatigue syndrome, an invisible but debilitating illness which he keeps from the people closest to him, including the boy he quite probably loves.

There’s so much Leander cannot control about his life – the pain, namely – so where he can he continually dissembles – he has invented his own identity and history. Constantly, he shifts the boundaries between himself and other people. But he is not invulnerable, nor is he entirely disregarding of others. He is not immune to the consequences of his actions. Drugs don’t help his illness but they alter states for him and lead him to heightened pleasure but also deep depravity.

Drugs and sex immerse him in an underworld of crime and corruption which lends the book it thriller aspect. To simplify the plot: the story becomes an exciting, page-turning chase across the vividly rendered dirty streets of south London to capture one man who has kidnapped another. (London emerges as another carnivore character – a city literally eating itself.)

It’s a playful book by its very structure – it’s divided into acts, and part of the action involves the creation of a film (which provides a lot of humour) as well as the filming of sex tapes which will disturb many readers and offend some. But everything, wherever it occurs on the spectrum between pleasure and pain is a performance, as we are constantly, delightfully reminded: people are directed and controlled, deftly manoeuvred by a talented writer in control of his material.

Carnivore succeeds entirely in being several books at once: an urban fairy tale, a literary thriller, a story about telling stories (Leander describes himself as a ‘master of fictions’), a comedy (you could even call it a farce), a tale of self-destruction.

Don’t be deterred if you think it all sounds a bit meta. Then again, surely we’re better than ever at coping with that kind of writing because there’s much more of it about in the mainstream? Many of Lyon’s ideas about truth and reality will be familiar to you. Here’s an example: ‘Stories that aren’t biographically true can still be true – if they reveal something about the teller’s psychology … a lie, as an evasion or a complication, is still a revelation of character – it’s a slanted truth.’ What I loved about Carnivore is that these ideas, however erudite or lofty or whatever are mired in the physical. You never forget that Leander is suffering. It grounds the reader. You emerge from the book feeling wrung out, knowing it was a physical experience.

It’s an entertainment but one, I’m sure, its author hopes readers will emerge from with a keener understanding of what it’s like to live in a state of chronic pain. And we do.

Carnivore is published by HQ, an imprint of HarperCollinsPublishers.
Posted by Linda Newbery at 00:00