Guest review by Helena Pielichaty: THE GIFTS by Liz Hyder 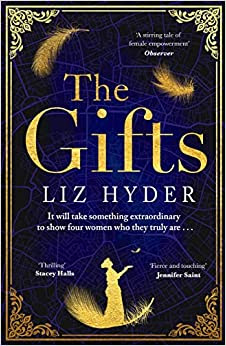 "Something extraordinary and haunting ..." 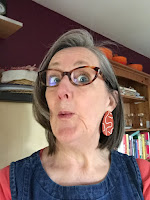 Helena Pielichaty is a children’s writer. She has had over thirty books published, mainly by Oxford University Press and Walker Books.

Website: www. helenapielichaty.com
A few chapters in to Liz Hyder’s engrossing debut adult novel, a Thames boatman finds a woman’s body: ‘It is not the usual sort that Peter King drags from the murky Thames with his hook. She is older, for a start. Silver hair and pale white skin. She looks in good nick, he thinks to himself, as if she has fallen asleep underneath the waves …’

No, don’t roll your eyes. The Gifts is not another crime story of a hapless female victim and the detective sent to solve the case. This story is different, for the body is different. As Peter King discovers, this dead woman’s body has wings. Seizing the opportunity to make money, King hears that a surgeon is in attendance in his tenement. ‘Might you be interested in a curio, Sir? A body with some distortion to it, perhaps?’

Surgeon Edward Meake is most interested. The corpse is brought back to his basement to be analysed and dissected. As Meake severs the wings, his curiosity is piqued, his ambition ignited. Could this be his chance to make his name? To outshine his rival, the more flamboyant Samuel Covell? When, a little later, he takes possession of another ‘angel’, this time very much alive, his question is answered and his destiny is sealed.

Meake is one of five main protagonists in this multi-narrative, fantasy-reality tale set in 1840. The other four are women: Etta, a botanist, daughter of a deceased free-born Jamaican slave and a wealthy Shropshire landowner. Natalya, a gifted storyteller, forced to leave the serenity of her remote Scottish island to seek, she hopes, lodgings with her cousin in London. Eighteen-year-old Mary, the spirited ward of journalist Jos and the late George, reduced by circumstance to doing piecework by fixing buttons on cards. Finally, there is Annie Meake, Edward’s wife, a talented artist, desperate to conceive. Over the course of the 469-page book, Hyder skilfully nudges these characters towards each other, one powerful voice at a time, until they inevitably converge.

The Gifts is a page turner with a feminist twist. Through the four women’s experiences, we are left in no doubt about the unequal status of women in the mid-nineteenth century, a time when men felt they had ‘God-given’ rights over women and the law supported the notion. Yet it was also a time when women began to rebel against this misogyny. Although such ground has been well covered in fiction and non-fiction (the recent televising of Ann Lister’s diaries, Gentleman Jack, springs to mind as one example), by having two of her characters possess something as supernatural as wings, Hyder is able to explore these injustices in a freshly-imagined way. Wings can be ‘clipped’ and they can be used to soar – metaphors which are played well here.

It is hard to believe this is only Hyder’s second book, so seasoned a writer does she seem. Her first was the highly acclaimed Bearmouth, a dystopian YA novel which won the Branford Boase Award 2020 and the Waterstones Children’s Book of the Year for Older Readers 2020. Hyder makes the crossing from YA to adult seamlessly, bringing with her, perhaps, the caveat of making sure something happens on every page. Multi-narratives risk the reader losing track of the various strands but Hyder avoids this by keeping the chapters short and pacy. The result is something extraordinary and haunting and I applaud her for it. I can’t wait to see what she comes up with next.

The Gifts is published by Manilla Press.