Guest review by Julia Jarman: NOTES FROM AN EXHIBITION by Patrick Gale 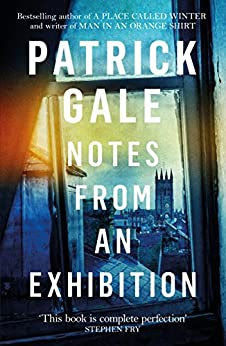 "Patrick Gale, a writer new to me, beguiles."
Julia Jarman has written books for children of all ages. Her work includes The Time Travelling Cat series for readers of eight to twelve or thereabouts and the acclaimed picture book, Big Red Bath. She is currently trying her hand at writing for adults ‘to see if I can’.
The pram in the hall is Death to Art, to paraphrase Cyril Connolly. Not for Rachel Kelly it wasn’t! She had four children but they didn’t stop her painting. Nothing stopped Rachel doing what she had to do or wanted to do, not babies, not prams, not manic depression, as it was called in the second half of the twentieth century when most of this novel takes place. Rachel was bipolar but she made this work to her advantage, the highs inspiring work of astonishing intensity, the lows landing her in hospital, but that didn’t stop her for long. She thought the lows, made worse by postnatal depression made the subsequent highs worthwhile. Hence, possibly, the four children.

Rachel was lucky enough to have help, lots of help, from devoted and dutiful husband, Antony; from supportive doctor Jack, also a painter so he understood better than most; and from those four children, all devoted in their own way till, perhaps, they could stand it no longer. I say ’perhaps’ because, though we hear from each grown-up child in turn, we hear only parts of their stories.

There’s Garfield the oldest, not Antony’s son, a lawyer turned violin maker. Rachel was pregnant when Antony rescued her, after a suicide attempt, and took her to his grandfather’s house in Penzance, abandoning his own academic career at Oxford. Next came Hedley, whose devotion lasted longest, possibly because he separated himself a bit, rejecting the Quakerism of the rest of the family, but also because he understood Rachel, being an artist himself. Jack called him ‘the family glue’. Then there’s Morwenna, the only daughter, the one we know least about because she got the hell out of it. Lastly, there’s Petroc the youngest who dies first, but not on his seventh birthday as I feared when I first saw him on the beach, enjoying his special day with Rachel, both of them absorbed by the art they were creating, both heedless of danger. I wanted to yell at her, ‘Look out! Be a grown up!’

It’s a novel about family relationships but it’s Rachel we hear about most. She is central in the book as she was in life. Everyone else circles round her trying not to hinder if not actually help. I’m fascinated and appalled when I read about children who protect their parents from the harsh realities of life, especially abused children. Are Garfield, Hedley, Morwenna and Petroc , neglected by their mother but cared for by their father, abused? Discuss. All the big questions are raised in this novel: nature v nurture, religious belief as practised by The Society of Friends, creativity, morality. I could go on.

I need to say it’s deep and very entertaining. Firstly because all the characters are so real. I identified with all of them and cared what happened and carried on caring when I stopped reading. Secondly, and this follows from the first, a lot happens. It’s gripping. I wanted to know not only what happened next to each character, but also what happened before. And finding out, especially about Rachel, after her death – the exhibition of the title is a retrospective – is fascinating. No spoilers but there were shocks.

Patrick Gale, a writer new to me, beguiles. Rachel the creative artist, her paintings, and the notes about the paintings, referred to in the title, are as real, or more real, than Barbara Hepworth and other artists of the Cornish School who also appear in the novel. Confession: I googled Rachel Kelly to check, but no, she didn’t really exist, but now she does, the product of a brilliant creative imagination. I salute.

Were any children harmed in the writing of this novel? I hope not.

Notes from an Exhibition  is published by Tinder Press

See also: Take Nothing With You reviewed by Linda Newbery