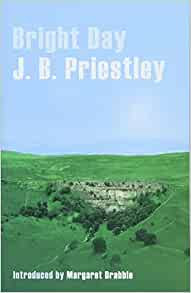 "Simply, his work rings true, a powerful example of how honesty emerges through the challenges of emotional intelligence."

Graeme Fife has written many plays, stories, features and talks for radio, stage plays and articles for newspapers and magazines, and is now a regular contributor to BBC Radio 4's From Our Own Correspondent. He's the author of a string of books - children's stories, biography and works of history. Great Cycling Climbs, which brings together his books on the French Alps, is published by Thames and Hudson. He says, 'I urge everyone to buy from their independent bookshop, if they're lucky enough - as I am - to have one nearby. If not, by any means possible to counter the sprawl of the online consumer graball.'
Knowing Priestley through his plays and his experiments with shifts of time I now, belatedly, delight in his novels, discovering another side to a writer whose company I enjoy, whose work is rich in insight, tender and lyrical, muscular and unflinching, by turns. Priestley writes his own life into evocation of times he has known, lived through, learned from, without any blatant intrusion of autobiography. Simply, his work rings true, a powerful example of how honesty emerges through the challenges of emotional intelligence. Bright Day explores Priestley’s fascination with how the flux of time plays on our consciousness, by splitting the narrative between two eras of the central character’s life.

Set in part after the Second World War, the story begins in the lead-up to the First World War. Hope and confidence in those early years, a jaded sense of lost purpose in the aftermath of another shattering conflict, years later.

Gregory Dawson is staying in a hotel on the Cornish coast, working on a screenplay. Two guests arrive – people he knew as a young man in Bruddersford, thin disguise for Priestley’s native Bradford:

"My Bradford, where I was born and where I lived the most exciting and perhaps the most important years of my life is not really a town at all, it is a vast series of pictures in time and space…an autobiographical library…a hundred thousand succeeding states of mind, it is my childhood and
youth."

Priestley captures the promise, and confusions, of youth, without sentimentality, tracing the progress of callow feelings, of unformed thought, in the gradual maturing of Dawson as a young man through his association with the Alingtons, a family of what seem to him brilliant individuals: sophisticated, stylish, wealthy. He’s drawn to their manifest poise, their sheer ease in a social milieu utterly strange to him, quite other. It’s part of his emergence into young manhood soon to be cast into the horror of the trenches. The shaping experience of war emerges only in casual allusion, but the imprint of that shocking reality resurfaces, almost subliminally, in the slow loss of any essential belief in the worth of what he is doing, labouring over a film script. It feels hollow. Hollywood’s charm has evanesced and, though this does not turn him into a cynic, it helps to impel him into revaluation of what those early years had exposed him to and a psychological blow whose implications he’s never explored or come to terms with. In disillusion, he finds elucidation.

The producer of the film he is writing spells out what underpins that disillusion: "... the power of movies…is frightening…What we are doing is filling a horrible vacuum, where once there were gods and goddesses and then afterwards saints and guardian angels. We are mythologists. We are the only licensed necromancers and wizards, shamans and medicine men. It is not the conscious mind, which we merely tickle but the deep unconscious that is our territory.’
And the deep unconscious is what Dawson learns to grapple with, painfully compelled but with frank courage. An old friendship, a renewed acquaintance, the triggers of memory, all push him to a realisation that he’s reached a natural terminus – both in his work and his life – where the call to change in both becomes irresistible.

From the tentative beginnings of his first years of work - in the cloth trade - his journey has taken him far geographically and intellectually, but it’s the need to reconsider, to re-examine, that lies at the heart of this beguiling story. From the New Year toast that father Alington proposes "to Nineteen Fourteen and all that it will bring us – peace, prosperity and friendship" to the recollection, years later, of how "an ageless secret self flitted through bewildering telescoped scenes that ran the chalk trenches of Picardy into Picadilly Circus and jammed Brigg Terrace and Canal Street into Hollywood and Beverley Hills…and cried 'Lost, lost, lost', searched and searched and could never find what was to be found".

But it is, finally, to be found and found through love. A woman Dawson meets on his completion of the script and decision to quit – despite lucrative offers of more work, work which he knows will only leave him feeling emptier – speaks of the death of her husband and repeats those words lost, lost, lost. But determined to confront the loss, she says "and the worst thing to do is turn your face away and hold yourself rigid and not let life go flowing through you. Do you see what I mean, Gregory?"

Bright Day is published by Great Northern Books
Other First World War books:
In Parenthesis by David Jones, reviewed by Graeme Fife
Now All Roads Lead to France by Matthew Hollis, reviewed by Celia Rees
My Dear, I Wanted to Tell You by Louisa Young, reviewed by Linda Newbery