MY DEAR, I WANTED TO TELL YOU by Louisa Young, reviewed by Linda Newbery 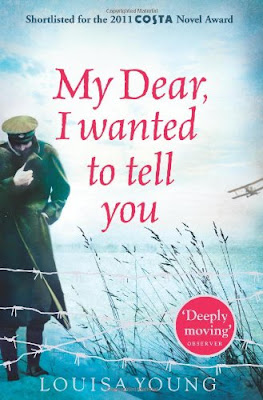 'What sort of life can these characters rebuild? Where has the war left them?'

I can't think why it's taken me so long to get round to reading Louisa Young's engrossing First World War novel. It was widely publicised, having been shortlisted for the Costa Novel Award and also chosen for Richard and Judy's Book Club, guaranteeing a wide readership. This thoroughly involving story includes an area of the war and social history which isn't - as far as I'm aware - much covered in fiction, namely the pioneer work in facial reconstruction undertaken by Major Harold Gillies. It stands alongside Pat Barker's Regeneration trilogy as a powerful exploration of the physical and psychological effects of injury and trauma.

We first meet Riley Purefoy as a boy of eleven, when he's hit by a snowball in the face (neatly prefiguring the far more serious injury he'll receive ten years later while fighting in the Ypres Salient). This incident introduces him to the bohemian Waveney family, including daughter Nadine, and through them to an elderly pre-Raphaelite painter, Sir Alfred, who promptly recruits the boy as a model and then general assistant. Thus the clever, enterprising Riley is introduced to the artistic middle class of Kensington, and begins to see a future for himself beyond the more limited expectations of his working-class parents.

By the time Riley joins the Army, still only eighteen, he is in love with Nadine, aware that her French mother discourages their association because of his lowly origins. His wit and adaptability soon lead to him being commissioned, however; and Nadine herself, loyal and spirited, scorns her mother's doubts. Their growing love is set against the decline in trust between Riley's Commanding Officer, Peter Locke, and his beautiful but vapid wife Julia. Julia wants nothing but to be a good wife to Peter, but finds him increasingly remote from her, both in his letters and in person when he comes home on leave. Longing to receive and offer physical solace she is dismayed by his perfunctory, almost brutal, embrace in bed. Lacking much purpose, even after giving birth to a son, Julia becomes obsessed with the need to preserve her looks. Her experiments with eyebrow tattooing and facial peeling treatments are set against the more drastic remodellings being attempted at the nearby Queen's Hospital, in Sidcup, where her VAD sister-in-law Rose works under the supervision of Harold Gillies. (Alongside Gillies, another real person we glimpse here is Kathleen Scott, Louisa Young's grandmother, a former student at the Slade School of Art who assisted the surgeon by making models and casts of patients' disfigured faces.)

Inevitably, Riley Purefoy arrives at Queen's for treatment. "The young man who had been the arrowhead of the system of destruction now became the epicentre of an industry of reconstruction. He who must destroy had become he who must be mended.' Some writers, describing terrible injuries like Riley's, veer too close to sensationalism and even relish, but Louisa Young strikes just the right balance: there's enough stomach-turning detail to make the reader aware of the huge and painful adjustments faced by Riley and his fellow patients, but not so much as to seem gratuitous.

The relationship between Riley and Nadine - now a nurse herself, serving in France - has till now been characterised by openness and honesty, which makes the letter that gives the book its title all the more heartbreaking. Two letters from Riley to Nadine begin in this way: the first sent from the Casualty Clearing Station on a standard form; the other from the Queen's Hospital, enlisting the help of Rose Locke. Both letters include lies. The first is understandable and probably not unusual. The second is devastating.

The Armistice comes before the novel ends, and we see the uncertainties it produces. 'No one ever wins a war, and wars are never over.' For Riley, 'Before, while it was still on, I was Captain Purefoy, wounded soldier. Who am I to be now? Mr Purefoy, disabled ex-serviceman? His age rang through his head like the tolling of a bell. Twenty-two, twenty-two, twenty-two. There was an awfully long time ahead of him.'

What sort of life can these characters rebuild? Where has the war left them? These questions clearly intrigue Louisa Young, as she has gone on to explore them in a sequel, The Heroes' Welcome. I hope that among other things there will be a fulfilling role for Rose, who is pivotal in the plot of this first novel, supporting all the other main characters and even keeping her patience with the exasperating Julia, while assuming that she'll never find a loving relationship of her own. Maybe she'll be proved wrong. 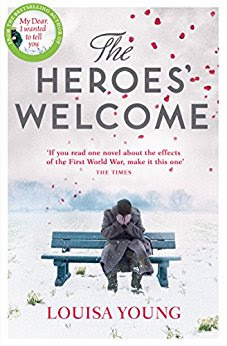