QUICK READS: the 2017 books. A review by Adèle Geras

If everyone were fully literate, there would be no more wars. Okay, that's overstating it. Of course it's not true, but it's near enough to the truth to be something worth saying. If there were Universal Literacy, our prison population would be very much smaller. If girls were educated properly all over the world, then the terrible things that happen to them would not be done with such horrifying impunity. If the people who don't read were to start reading (and I don't exempt the President of the USA from this, by the way) their lives and the lives of everyone in their sphere would be immeasurably improved. There is nothing, not one single thing, to be said for ignorance and illiteracy, or you may be certain someone would have said it by now. Even the nastiest of politicians pays lip service to education and indeed, it's a fine thing. But Literacy is different. It's impossible to navigate the world without it. Even if you don't want to read Dostoevsky, you do want to be able to decipher labels in the supermarket and enjoy the shiny magazines that tempt you from the supermarket shelves. You want to be able to read letters sent to you from your daughter's school. And perhaps more than anything, everyone in the world should be able to share the pleasure of reading a story to a loved child. People need to read and for many reasons, there are those who can't.

Some have been overlooked at school. They've managed (and don't ask me how, because it's one of life's greatest mysteries) to sit through years and years of formal education without being able to decode the language they need. Others have reading difficulties, like dyslexia, but even these can be helped enormously by the right choice of book. Take a bow here, Barrington Stoke: the publishing house which has made books for dyslexic readers somewhat of a speciality. (Linda Newbery's latest title, Until We Win, comes from them.)

There are, in addition to children who've slipped through the net, an enormous number of people who are fluent readers in their native languages, but who haven't yet learned English to a standard which will allow them to read say, Ian McEwan or Margaret Atwood. They need short, easy books which will lead them on to other books when their language skills improve. These books have to be interesting and gripping and grown up. They need to be written in simple words, but those words still have to pack an emotional punch, or be funny, or exciting or interesting.

Enter Quick Reads. The brainchild of Gail Rebuck, then of the House of Random (Random House) and now of the House of Lords, they are short books for those who find reading hard for some reason and who are intimidated by bookshops. Nowadays, Galaxy sponsor the books and the best thing of all is: they cost £1 each. This means that it's easy for libraries, literacy classes, prisons etc to buy them in large numbers and they've been enormously successful in all those places.

When this year's books were announced, I was cheeky on Twitter and asked to read them because I wanted to write this piece. I'm passionate for the cause, and I thought that this year's crop looked very enticing. I was right. I thoroughly enjoyed all of them. In the picture below, you'll see them displayed, except for the one non-fiction book, which is a Quick Reads version of a classic by Susan Jeffers: Feel the Fear and Do It Anyway. That's hidden by the other titles. 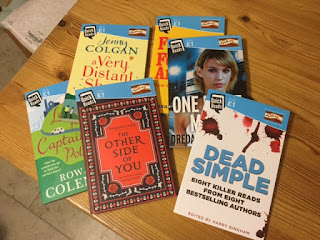 The books, in alphabetical order of authors, are:

Amanda Craig: The Other Side of You

The stories in Harry Bingham's collection are perfect for the intended audience. They all set up a situation which resolves itself by a neat twist in the tale. There's a widow who is not what she appears to be, a game of Scrabble played in prison which ends in an unexpected way, a scary tale which involves caged birds as you've not met them before and an unusual confidence trickster who gets more than she bargained for. They're written by experts in grabbing your attention, like Mark Billingham and Clare Mackintosh. Antonia Hodgson has a very good story set in the past, and Harry Bingham's own contribution leaves a (deliberately!) nasty taste in the mouth.

Rowan Coleman's book has a group of online chums drawn together by their love of the Poldark series on a very unusual road trip. They're intent on meeting Aidan Turner and their adventures are both funny and touching. There's a love story here which I saw coming, but that's no bad thing. Indeed, it will make the diffident reader feel clever when they spot it, and introduce them to one of the great pleasures of reading: feeling you're in some way in cahoots with the writer. It's a lovely story and lots of people will enjoy it hugely.

Jenny Colgan's very moving story of a young woman on the Scottish island of Mure is particularly relevant today. It concerns Saif, a Syrian doctor, who's found himself part of a small community who are not quite sure what to make of him. Lorna, our heroine, is taking care of a very sick father and while the story is romantic in many ways, it doesn't shirk the difficult stuff. Said is 'not free' to kiss Lorna when she would like him to. He helps her enormously when her father dies. Each of them is part of the other's grieving and healing process and the landscape of Mure is an important part of the book. I think this story will be helpful to many people. As Saif says of Lorna's father's death: "It happened in the right order." From which sentence we can deduce that there are deaths in his past which did not. There's a lot here which a sensitive teacher could discuss with a class of adults or older pupils.

Amanda Craig has done something miraculous with the word count allowed by Quick Reads. She's managed to combine three different strands in her book: a fairytale strand, an urban adventure strand and interwoven with both of these, a story about the Third Man Syndrome. She explains to us in a note at the end of the book that many have seen someone beside them when they were in difficulty who turned out not to be real. Shackleton saw an apparition like this. Some people would call them guardian angels. In this book, the Other Person helps Will who is on the run and fearing for his life. Craig's book is about many things: drug dealing on the worst estates, knife crime, survival, and city life on the one hand, and on the other, love and roses and Beauty and the Beast and angels being there for you when you most need them. Best of all, one of the two happy endings is totally unexpected.

Dreda Say Mitchell's book is about what happens when you're trying to put your life together after serving time. This makes it an especially good book to read with young offenders. Hayley means well but gets sucked in to trouble anyway. It's not her fault, but things take turns that she often can't cope with. The Devil's Estate is no fun. She has a child to look after and when she's robbed of the money she collects on the Estate, we get a Ticking Clock scenario which always makes for speedy page turning. I can't imagine readers not being caught up in Hayley's problems and willing her to be okay.

These books are the 2017 Quick Reads and I recommend them heartily, and not just to readers who find reading a problem. Do spread the word about a fine initiative which deserves the widest possible publicity.

Dead Simple is published by Orion; Looking for Captain Poldark, Penguin; A Very Distant Shore, LittleBrown; The Other Side of You, LittleBrown, One False Move, Hodder
Posted by adele at 00:00