Guest review by John Bowers: THE ROOM WHERE IT HAPPENED by John Bolton 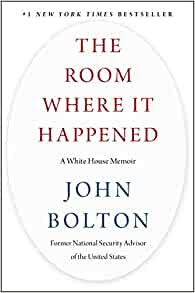 "This is a President truly addicted to chaos ... ” 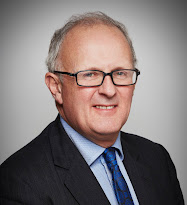 After attending state school in Grimsby, John Bowers was called to the Bar in 1979 and took silk in 1998. He has practised primarily in employment law and human rights. He has written or been the co-author of fourteen books on employment law. He has been Principal of Brasenose College Oxford since 2015. He also sits as a Deputy High Court Judge.
John Bolton is a polarising but significant figure. One suspects he could achieve an argument in a paper bag. He is a significant player in the Trump Circus because he was originally lauded by him as a great cold warrior who would make America’s enemies quake (having seen him as a regular commentator on Fox News). Gradually in office, Bolton became disillusioned with surely the most eccentric if not dangerous Commander in Chief in US history. He lasted as National Security Advisor only from 2018 to 2019. He resigned but the President, who is not one to allow people to leave with dignity, claimed that he had dismissed him, ostensibly for being too much of a war-monger.
A great feature of the book is Bolton’s ability to contrast this Administration with that of George W Bush, where he held the post of US Ambassador to the UN; he had also served Bush Senior and Reagan. Unlike them, this is a President who has no sense of history, does not read much and does little to prepare for significant summit meetings. One does not sleep easily with him as Leader of the Free World.

The book is the first insider’s account of Trump’s love in with the North Korean dictator. Trump adored a letter written apparently by Kim Jong Un. In fact it was Bolton says written by his underlings “as if the letter had been written by Pavlovians who knew exactly how to touch the nerves enhancing Trump’s self esteem”. Trump clearly wanted to meet Kim for the photo-op but did not read his briefings and was bested by Kim even though Kim had less cards to play and a smaller nuclear button (as Trump had once pointed out). This is at one with a disturbing kow-towing to other dictators or authoritarian figures whether they be Putin, Xi or Erdogan.

Trump’s ignorance as revealed by Bolton is truly extraordinary. As examples he thought Finland was part of Russia and he had no idea that the UK was a nuclear power. It is Trump’s attitude to Russia which is the most troubling, perplexing and difficult to explain. It is hard to understand why he would want to ensure that all but interpreters were absent from a meeting he insisted be held with Putin. As Bolton says “I was not looking forward to leaving him in a room alone with Trump”. Trump’s desire to see everything in terms of his own interest, especially his desire for re election but also commercial, is very worrying.

Bolton’s description of a meeting with President Xi Jinping of China is a classic. Xi read arduously note cards hashed out in advance while Trump ad libbed “with no one on the US side knowing what he would say from one minute to the next”. Xi ingratiated himself with Trump by saying he looked forward to working with him for another six years, at which point Trump said people were saying the two-term limit on presidents should be repealed for him. Trump then asked Xi to help him win the next election by alluding to China’s economic capability to affect the ongoing campaigns. Of course relations have now taken a turn for the worse with mutual allegations now filling the air.

The book also covers in detail the coup to topple Maduro in Venezuela which never quite happened. Iran, the Taliban, G7 meetings and getting Europeans to pay more for their defence are other themes which run through the work. Bolton provides some rare insights such as that he recalls that “Perhaps uniquely in presidential history, Trump engendered controversy over attendance at funerals” in particular those of Barbara Bush and John McCain, with whom he continued his petty squabble well after his death.

Bolton also sheds some light into the naked and ruthless media management of the Trump team. For example, he rushed out a statement on Saudi Arabia because this will “divert from Ivanka” who had been accused of using her personal e mail for government business.

This is a President truly “addicted to chaos” as the book blurb states. This is a truly dysfunctional White House and it is difficult to see why any rational person would want to work there. The book richly demonstrates how the daily tweets get in the way of developing rational foreign policy.
The Democrats wanted to call Bolton to appear in the impeachment process. He does not quite deal with why he did not agree to testify and instead saved up his revelations for this no doubt lucrative book although he does aim probably merited criticism at the way the process was handled.

Bolton has few good words to say about anyone and has contempt for the idea that Trump was originally surrounded by an “axis of adults”. He takes aim at the inadequacies as he saw them of Mattis, Pompeo and Tillerson and is scathing about Nicky Haley, the Ambassador to the UN.

Bolton has a racy style and his insight into foreign policy in the past is illuminating. His overall verdict on Trump is “he second-guessed people’s motives, saw conspiracies behind rocks and remained stunningly uninformed on how to run the White House, let alone the federal government”. It is hard not to agree and the evidence is clearly presented in the book’s 577 pages.
The Room Where It Happened is published by Simon and Schuster.
See also: John Bowers' review of Tribes by David Lammy.
Posted by Linda Newbery at 00:00