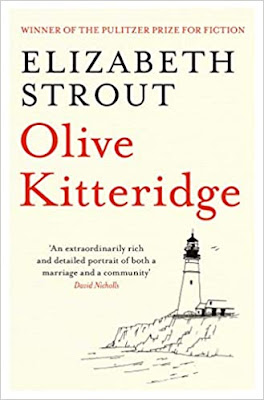 "Isn’t that why reading is fascinating – it reveals what we don’t and can’t know about each other in real life?"

Olive Kitteridge, a retired maths teacher, lives in Crosby, a seaside town in Maine, USA, which is the constant in these short stories. Sometimes central, sometimes peripheral, Olive moves in and out of them as she does in the community, influencing and influenced by the other inhabitants, though I need to qualify what I mean by ‘influenced by’. Olive is cranky and contradictory and always, always herself, so it would be more accurate to say she’s ‘affected by’ other inhabitants rather than influenced. She reacts to other people, but she is also proactive, a law unto herself, often barging in where others would fear to tread, sometimes saving a situation, as in Incoming Tide where her intervention stops a man, a former pupil, from committing suicide; sometimes making it worse, as in A Little Burst when she overhears the bride, her new daughter-in-law, criticising the dress she’s wearing and worse, mortifyingly, her mothering. What has her son said about her? What criticism has he made? Olives suffers and takes revenge. Overweight, under-charmed, amazingly intuitive, she arouses strong feelings in the people she comes across – and in readers. Our book group divided into those who thought it the best book they’d read in ages, because the characters were so real, and those who couldn’t finish it for the same reason. ‘I know there are people like that in real life,’ said one, ‘but I don’t want to read about them.’

I crave books which show me how things are. I loved the late Margaret Forster for giving me those sort of books. I don’t want dystopias – hate them. I don’t want make-believe – can rarely engage with other writers’ fantasies though I create my own, but I do want books which throw light on how we are. To be honest, I might avoid Olive in real life, unless perhaps by lucky chance I’d discovered her hidden depths, but I find reading about her fascinating and keep returning to these stories, always finding something I’d missed. And isn’t that why reading is fascinating – it reveals what we don’t and can’t know about each other in real life? Books are better than real life. I remember a character in Absolute Beginners by Colin MacInnes saying books were great because they ‘sliced the top off people’s heads’ so you could see inside. Exactly.

Part of the fascination of Olive is to do with the fact that she can’t pretend. She can’t tell the social lies most of us tell to keep things running smoothly. So she’s rude and inhospitable when her nice-to-everyone husband invites a young couple to dinner – after she has said she doesn’t want him to, because after a hard day’s work, she doesn’t want to cook fancy food and be sociable; and also maybe, because she’s intuited that her husband is a little enamoured by the young wife, his employee, not that he realises this. He’s so nice he doesn’t know himself, well not the not-so-nice bits. Is that why we admirers admire Olive? Because she does know herself, or is willing to find out, because she dares where we daren’t?

Olive is complex and complicated and it is of course the writing which conveys this with amazing economy. Each short story is like a mini-novel and added together they are like a maxi-novel in the way they reveal human nature in all its variety. I love The Piano Player, a story in which Olive has only a walk-on role. Focused on one night in the life of Angela O’Meara who plays the piano in the cocktail lounge of a local eating place, it spans generations of several lives, shows how others see her and why they see her as they do, and reveals her as loving and loveable, in marked contrast to some of the major players in her life. Be warned, there is cruelty. I love . . . but I love all these stories, none more though than A Little Burst where Olive is central. Wounded by that daughter-in-law, Olive aches to make her understand. ‘She would like to say, Listen, Dr Sue, deep down there is a thing inside me and sometimes it swells up like the head of a squid and shoots blackness through me.’ She is picturing the depression and the grief – after her own father committed suicide - that stopped her being the sort of mother she wanted to be, but also possibly the dark side of her character, of all our characters. Am I fanciful in seeing the squid as serpent? It’s the author’s ability to make us see, the external and the internal, that makes these stories so intense and vivid. They are I think modern morality tales, showing us good and bad characters, not simplistically, not in black and white, but in shades of grey, the tone, dark or light, depending where they come on a scale of cruelty to kindness.

And Olive is kind, mostly.